Three Things Those Affected By Suicide Should Know

Affected By Suicide? Know It Was Not Your Fault.

Many times people blame themselves for their loved one's suicide. Nothing could be further from the truth. Your loved one had an illness and succumbed to it. You wouldn't blame yourself if you lost a loved one to cancer or heart disease. So why should suicide be any different? The vast majority of people who committed suicide were suffering from a very real psychiatric condition, a chemical imbalance in the brain (Adult Symptoms of Mental Health Disorders). They simply succumbed to an illness of the mind. 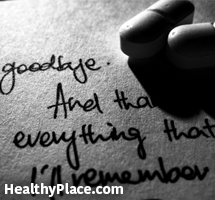 Sometimes this false guilt has a basis in reality, such as a homophobic parent whose gay child committed suicide. I lost a friend after he had a fight with his father. In these cases, it is important for the survivor of traumatic bereavement to remember that suicide is a choice made by the person who commits it. While there may or may not be contributing external factors, suicide is always a choice that a person makes. Usually this person feels their loved ones would be better off without them and wants to spare their loved ones further pain. In the rare cases where this is not true, the person wants to spare themselves unbearable pain and doesn't want to let their loved ones watch them suffer. Suicide is an irrational decision that a sick mind has rationalized.

This is a common belief that does not appear anywhere in the Bible. In fact, while the Bible often records suicides (six if I recall correctly), it never comments on the act. It simply states the person died by his own hand, usually when they were going to die anyway and wanted to spare themselves further pain.

The belief that a person who commits suicide goes to Hell originated under St. Augustine, who was frustrated with a suicide cult within Christianity. The cult believed martyrdom was a commandment and frequently tried to get people to kill them. St. Augustine was trying to protect the survival of the Church. He was not dealing with mental illness.

If You Are Affected By Suicide, There Is No Reason Why.

You will never find the reason why your loved one committed suicide. You will, in time, come to terms with a partial answer, even if it is something as basic as "He was going into a manic episode." Many times the person who actually committed suicide doesn't know why he/she is doing it at the time--they only know they are overwhelmed and that suicide seems like the answer to unbearable circumstances. So there is no reason why.

This does not mean the survivors should not struggle with a search for a reason. That's a natural and normal part of grieving (Coping With Loss: Bereavement And Grief). The grief of those affected by suicide is unique in that there's a search for a reason why, but the truth is there is no reason. Somehow we must content ourselves with either a lifting of the need to know why or a partial answer to that question. We must, as one survivor observed, wear out our questions to come to terms with them.

APA Reference
Oberg, B. (2015, November 30). Three Things Those Affected By Suicide Should Know, HealthyPlace. Retrieved on 2022, July 2 from https://www.healthyplace.com/blogs/recoveringfrommentalillness/2015/11/three-things-those-affected-by-suicide-should-know

Judas committed suicide because of guilt when he became a traitor himself. Many people feel guilty for different reasons. Guilt is a root cause of depression and anxiety.

I attempted suicide 20 years ago and it was a snap decision. I was in crisis and death threats from my abusive ex-husband contributed to my decision. Luckily my best friend at the time called me and I told her that I had swallowed 54 sleeping pills and that I was going to leave this world because I saw no way out of the ever deepening depression I had sunken into.
She called the police on another line and reported me. An ambulance was dispatched to my home. She was on the phone with me the whole time, talking to me in quiet and understanding tones. She told me everything would be alright and eventually it was.
Almost 2 years later I met the most wonderful man who understood me like no other and helped me beat the major depression that plagued me for years. He and I are still together battling other mental illnesses that I have. If I had succeeded in killing myself I would never had met him and would have never known love and what life really had in store for me.
At the time all I could see that life had in store for me was pain and anguish and abusive relationships. You get tunnel vision with depression and can't look toward the future with hope only complete despair.

Sometimes I think that suicide victims see a deep darkness with no solution and no way out. As you stated, they think irrationally. I've seen this with several of my friends over the years. I've walked in darkness. But with time things can get better. It is a sad stat that 40,000 or more commit suicide each year. That is more than murders and deaths from drunken drivers combined.