Should Others Have Input In Your Mental Health Treatment?

Like it or not, other people often have input in our mental health treatment. For example, my mother once contacted a psychiatrist and told her my symptoms. Without talking to me, the psychiatrist told my mother what changes she would make. I confronted her and she later told my mother I had an attitude problem (ironically enough, this psychiatrist told my mother my borderline personality disorder (BPD) was caused by poor parenting). Long story short, I fired her. But you can't really blame my mother. She wanted what was best, even if it meant the psychiatrist broke confidentiality in a non-emergency situation. It raises an interesting question: should other people have input in your mental health treatment?

Other people often see things we don't. That's why the treatment team in inpatient settings often consists of more than one person. What one person or the client may miss, another person may catch. Communication is vital for successful treatment.

C.S. Lewis wrote in The Horse's Boy, "Come, live with me and you'll know me." The people we live with know our baseline and when we depart from it. They may have insight into our condition that we lack. They may have important information on what the most successful form of BPD treatment might be. When I lived with my parents, my mother often advocated for me. For example, when one medicine had me overly sedated, she called my psychiatrist (yes, the same one I fired) to report that I did nothing but sleep on the couch and complain about being tired. The psychiatrist adjusted my medicine, and I was able to be out and about. And I'm grateful for that. 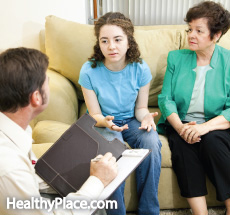 I live in an apartment complex for adults with severe mental illness. The staff often take notes on how we are acting and these notes are used in treatment. The staff have more contact with us than the therapists and the psychiatrists, so they're more likely to notice any behavioral changes. They report when we're not doing well, and that factors into what measures are taken to keep us safe.

Even I observe things about my neighbors. For example, one often wanders around shouting to himself. I have complained to staff--especially when he does this around midnight--and I'm grateful that staff can communicate his conduct with his treatment team, who will hopefully adjust his medications. His psychiatrist doesn't hear him shouting and he's too out of it to report it himself, so it's good that staff can talk to his treatment team.

The input of other people can be very valuable.

Confidentiality is the cornerstone of treatment. Our care should never be discussed with others without a darn good reason. The therapeutic relationship is built on trust, and we need to trust that what is discussed in the office stays in the office unless we're a danger to ourselves and others.

When I lived in Texas, it was a crime to lie to have someone admitted to the psych ward. While I'm kind of grey on this law--I see both sides of the issue--I understand the reasoning behind it. It is designed to protect people from unnecessary hospitalization. It is designed to keep the therapeutic relationship confidential.

I've had people make things up in order to have me detained and evaluated. It destroys what trust there is. It can irreversibly damage a relationship, therapeutic or otherwise. I can understand why people lie, and it's probably a reason the mental health system isn't worse than it is, but I don't believe anyone should lie to get a person treatment.

Treatment Confidentiality Is Up to the Individual

Whether or not other people have input in one's mental health treatment should be up to the individual in question. Personally, I let other people report my symptoms and reactions to medication, but I don't let the psychiatrist or therapist discuss what I've said. This works fine for all parties involved, but you may want or need something different. That should be your choice.

What do you think? How much, if any, input should other people have in our treatment?

APA Reference
Oberg, B. (2015, January 12). Should Others Have Input In Your Mental Health Treatment?, HealthyPlace. Retrieved on 2023, February 3 from https://www.healthyplace.com/blogs/recoveringfrommentalillness/2015/01/should-other-people-have-input-in-your-mental-health-treatment