Should I Apologize for Having a Mental Illness?

I sincerely hope you have not ever considered this. But you probably have. At some point, in our journey to recovery, we have probably felt like we need to apologize for our behavior.

Feeling Guilt after the Diagnosis of Mental Illness

For example, if you have had a serious episode of depression and have recently become well--after months of searching for The Right Medication and hard work—memories of when you were ill probably haunt you.That is human and sometimes being human just plain hurts. And it hurts more if you feel you have hurt others along the way.

When you’re feeling low you might isolate yourself; those you love probably try to step in, tell you that they care and you push them away. I did. That is the nature of depression and the blackness that defines it. 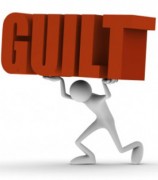 Depression can make a person mean! I can throw out expletives like the best of them when I’m feeling rough. And then, once recovered, I feel guilty. I remember the words I said to those I love and I remember the look on their face. The sadness.

Reconciling with those you Love

You probably apologize. Well, I did. I hung my head sort of low, averted eye contact or made sure to stare intently into their eyes.

"I'm sorry. I was not myself." I sort of feel like I am kissing their ass a bit but that's the sarcastic part of me, the part that would rather move along, without words of reconciliation. But it can be necessary.

The reaction? "It's okay Natalie, we understand." And they mean these words because they love me. And I love them too and all that Hallmark jazz.

When I was going to 12-step meetings I was told to "take inventory of people you hurt." I fought my way out of it. And then I did it. A list. A list of people I may have hurt before I became stable and well.

I talked to them all and my words were received with kindness because as much as I felt guilt, I would stand beside them if life got tough on their end.

Putting the Guilt Aside and Getting on With Life

So, now you, we, have said some kind words. We are coming to terms with our illness. Hopefully, we are coming to a place of relative peace and acceptance.

Should you apologize? I'm not really sure. Ask yourself. I view it less as an apology as part of recovery. And that's the goal, becoming stable and, in turn, having healthy relationships.

What do you think: How should we approach the situation?

APA Reference
Jeanne, N. (2012, May 3). Should I Apologize for Having a Mental Illness?, HealthyPlace. Retrieved on 2023, February 2 from https://www.healthyplace.com/blogs/recoveringfrommentalillness/2012/05/should-i-apologize-for-having-a-mental-illness

I’ve tried to kill myself and my boyfriend is really hurt I feel like trash for my actions, as much I I thought that’s what I wanted it’s really not what I wanted my emotions overwhelmed me and took the wheel. I want to apologize to him because I really am sorry but I don’t know how to word it I’m scared of him thinking I’m crazy and leaving. I’d understand if he did because he doesn’t deserve that but it wasn’t his fault.. any advice

Hi Nevada,
I'm so sorry that you have been struggling. I understand that this could be a really difficult conversation to have with your boyfriend, but what you have said in this comment is very open and honest. It could be a good starting point for addressing the issue.
If you ever experience suicidal thoughts again, please reach out for help. Here are some resources: https://www.healthyplace.com/other-info/suicide/suicide-suicidal-thoughts-and-behaviors-t…
Take care,
Megan

Having a mental illness exhibits an harassing psycho-social circumstance that overloaded seriously global life functioning. As it is known, each mental disorder compromise interpersonal relationships that additionally worsening the course and definitive prognosis of respective mental illness. So, your concern to apologize for having a mental illness presents great challenge for both: mentally ill persons and pertain social milieu. Indeed, it isn't necessary to apologize for having a mental illness, but the real psychosocial situation and sociocultural circumstances intrigued this psychiatric statement. Mental ill persons are in deep critic observation from others that overloaded theirs spontaneous interpersonal performances. This social pressure overburden daily social life of person with any psychiatric entity. However, the best to avoid over-apologize is appropriate psychiatric treatment and management of respective patient with any psychiatric disorder. Definitively, each person make any mistake through interpersonal relationship and the need for apologize should be routine performance. The same is value for psychiatric patients, not anything more.

Do I apologize for the depression that debilitated me for a year?
I was in bed for months, couldn't even do things I wanted to do.
Missed Christmas, other holidays, missed so many days with my daughters and granddaughter...
My daughter is angry.

I have bipolar disorder and I do tend to mess things up. But I never meant any harm. A lot of people are fishing for apologies from me, but my therapist said I had absolutely nothing to say I'm sorry for. I have a serious illness, and that's not m fault.
That's all..

Thank you all for being honest and sharing your personal experience. I too hurt my boyfriend the most and I keep thinking how long before he get tired and leaves me? He has shared with me that he feels like my personal punching bag. I feel so guilty and at times I don't know what else to say than sorry. But knowing that I may hurt him again, makes the sorry, worthless. I too have ask myself , how much responsibility should I take when I am inflicting pain to my love ones? How much is it me and how much is it my mental illness? This constant struggle adds to my overwhelmed mind and I just shut down.

I have been going through another bout with Depression lately and I hurt my boyfriend most. It's so hard to feel alone and scared, yet still have someone near me who sees my best even when I'm at my worst. The more he checked on me to see how I was doing, the angrier I became.
I knew/know what is happening to me. I am depressed. I tried very hard to control my sadness and anger, but still, some leeched out onto him.
It's not fair for them, the ones I love, to want to help me and be unable to find an "in". I do apologize, immediately whenever possible, for my foul moods. It makes me feel guilty to have to apologize so often.
But hey - I've got a new medication and look forward to brighter days. What else can I do?

Hi, Kellie,
I also tend to hurt my partner most---it's often those closest to us, isn't it? But they often understand to a higher degree then others as they know us best.
Thanks for the comment!
Natalie

I feel better with myself and conflict passes much easier if you let others know its not them that you are snapping at or whatever the emotional reaction but your just a bit lost right now.
I think it is good to take responsibility for our actions and reactions, its part of recovery. It has brought me to a point of self awareness within my illness to deal with conflict or my own self made frustration in a healthy way.
You can apologize and not feel guilty. To me its not too much an apology than it is communication. "Hey, im sorry for how im being im just anxious, or depressed, or whatever it may be. Just be patient with me."
Sometimes my husband is not sure if im going through a mood or he did something to upset me. I just let him know.

Hi, Samantha:
I agree--it's so important to be honest with those in our life. Our emotions can affect them negatively but if we express that it is our illness, it makes it easier on all involved.
I agree completely that you can apologize and not feel guilt--we do not need to.
I appreciate your incite and thanks for your comment.
Natalie

Speaking as a spouse of one diagnosed with MDD, treatment resistent I read this with interest. Just this morning I received a text from my hubby apologizing for calling me unkind names last night when we disagreed. I didn't know how to respond! I know he has depression - but I struggle, as does my daughter with how much right does this give him to be verbally abusive & just downright mean!? We've been married 30+ years and I've been struggling with his mean nature most of them.

Hi, Barb:
I'm sorry it's tough on your end---mental illness often is. Depression makes it hard to express ourselves to say the least. Communication is so important and easier said than done.
Thanks for your comment!
Natalie