Trauma disorders like Dissociative Identity Disorder (DID) and Post-Traumatic Stress Disorder (PTSD) come with a host of chronic problems. Cortisol imbalance - either too much or too little of this adrenal hormone sometimes referred to as the "ultimate stress hormone" - might be one of them. But why bother investigating something that might be a problem, when there are so many things that are? I'm a curious person. And I've got a hunch that managing cortisol might directly impact symptoms of Dissociative Identity Disorder and PTSD, which in turn helps balance cortisol levels, which alleviates symptoms, and around and around we go.

It's just a hunch. But like I said, I'm a curious person. So about a year ago I set out to make changes in my life that, in theory, ought to help stabilize my cortisol levels. 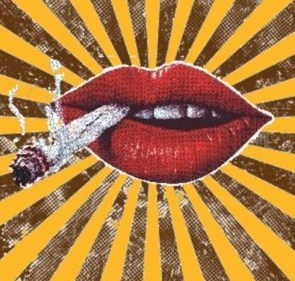 e illusion that we have control over our anxiety, fear, depression, whatever. It's ironic, really. Because by smoking we're actually handing that control over to cigarettes. Like a lot of people with Dissociative Identity Disorder and PTSD, I smoked for years. Then I discovered that smokers have higher cortisol levels than non-smokers and ex-smokers. So I quit. (Funny that lung cancer statistics didn't do it, huh?)

Dieters also have higher cortisol levels. It makes sense: restricting calories – deliberately inducing hunger, in other words – puts stress on our bodies. And I don’t know about other

And while I haven't truly dieted in years, like a lot of people with Dissociative Identity Disorder I have a history of disordered eating that doesn't just go away because you aren't on a diet. After all, disordered eating is born in the mind, not on our plates. So eating food wasn't enough for me. I had to let go of the idea that I would ever diet again. Because even if I gorge myself on 3000 calories in one sitting, if I do so with the belief that this is it, this is the last time I'll eat cake or french fries or whatever type of food I'm convinced is the root of all evil, then my body hears, "Hang onto this. You'll never see this food again."

This is a tough one for those of us with trauma disorders like Dissociative Identity Disorder and PTSD. Nightmares, anxiety, insomnia ... there are a lot of things that get in the way of a good night's sleep when you have DID and/or PTSD. But plenty of sleep goes a long way towards managing cortisol. Traditionally, this is where medication comes in handy. There are prescriptions drugs that can help, and even some natural sleep aids that work well (I'm a fan of melatonin supplements).

I quit smoking, made some progress in my relationship with food, and sleep? Well, that's still a process of trial-and-error. I also took some dramatic steps to decrease my overall stress level. Was it worth it? Find out next week.

Holly,
You are speaking my life. Reading your blog is like listing to myself in many ways. Whoa.