I Hear Voices with Schizoaffective Disorder & It's My Fault 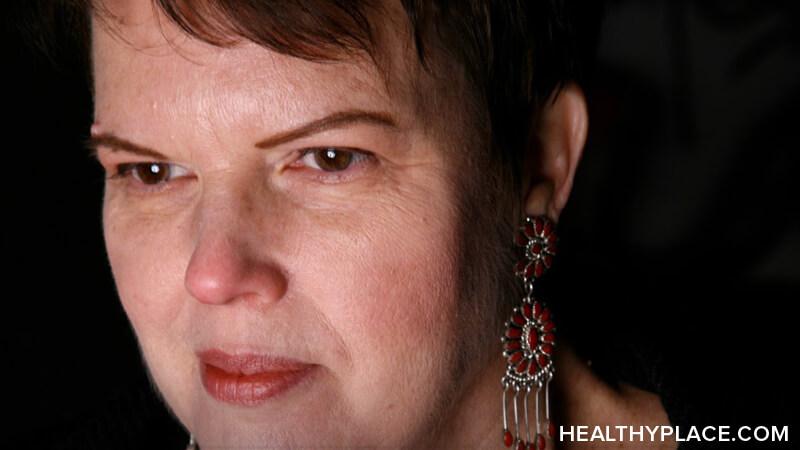 I blame myself for hearing voices because of schizoaffective disorder almost every time it happens. I know this doesn’t make sense, and I’m not being fair to myself. But it also adds an element of guilt to an already difficult situation.

Recently, I experienced hearing voices because of schizoaffective disorder at the Renaissance Faire. It really wasn’t that big of a deal, because my husband Tom and I had been there almost four hours already before I started hearing them. Still, I blamed myself. I blamed myself because I had been afraid I’d hear voices at the Faire days before we went to the event. I felt that I’d brought them on by thinking about them so much.

I often feel I’ve heard voices because of schizoaffective disorder just by thinking about them. But, sometimes, worrying, in general, is the culprit, too. It doesn’t have to be about voices. If I’m really worried about anything, it often brings on voices. So, when I worry and then hear voices, I blame myself.

This isn’t fair to me. It isn’t fair because I can’t help it when I worry and I’m working really hard in therapy on curbing my schizoaffective anxiety, which is the source of my worry.

Sometimes I Wish to Hear Voices Because of Schizoaffective Disorder

It gets trickier when I’ve wished for voices. Now, why would I wish to hear voices because of schizoaffective disorder? Often, if I’m really dreading something I have to do, even something seemingly simple like washing my hair, I wish the voices would come so that I’d have to deal with them and not wash my hair.

Sometimes the voices come when I wish for them and sometimes they don’t. But when they do, I blame myself. The voices even say, “You invited us.”

When I wish for voices and they come, I realize how scary the voices are and how something like washing my hair would be so much more preferable to hearing voices.

I must stress here that my schizoaffective voices don’t tell me to do bad things. More often than not, they just say silly things. They say, “Smoking is bad for you,” even though I quit smoking seven years ago. Recently, they sang the lyrics to a song by the band the Red Hot Chili Peppers.

Since the voices are fairly benign, I try to stick it out when I’m hearing the voices in public. So what did I do when I heard voices at the Renaissance Faire? I tried to stay at the Faire. I drank a lot of water and tried to enjoy a small musical performance. But, as I said, we’d been there almost four hours when the voices hit, and I was simply tired. I think I heard voices because I was overstimulated—after all, we did go opening weekend.

APA Reference
Caudy, E. (2019, August 22). I Hear Voices with Schizoaffective Disorder & It's My Fault, HealthyPlace. Retrieved on 2023, February 5 from https://www.healthyplace.com/blogs/creativeschizophrenia/2019/8/i-hear-voices-with-schizoaffective-disorder-its-my-fault

Schizoaffective Medication Doesn't Hinder My Creativity
Feeling Anxiety Is All-Encompassing: I Wish It Would Go Away
Elyah
August, 24 2019 at 12:09 pm

I thought about this response before I chose to type it out. I understand both the desirable need, as well as the fear, of the unseen worlds. Do not fear them, accept it for what you know it is, and ask for help from the benevolent beings. Not the ones that tell you you're unworthy, that you can't make it, that you're insignificant to this world. Ask for guidance from the ones that guide you to eating healthy food, building your strengths and skills and loving yourself. You're special and you have a gift. Using it appropriately and harnessing that gift, could be a lifelong journey.

Thank you for your comment. If I understand you correctly, I need to say that the voices I hear are not a gift. There is nothing mystical about them. They are a symptom of my schizoaffective disorder. That is all they are.