The Villains Behind Schizophrenia

Schizophrenia is a disease that affects our perception in ways that are unimaginable to most. Deep within the schizophrenic mind are a plethora of villains that haunt us our every waking hour. At one time I believed that these villains physically existed and would bring about my inevitable, torturous death. They stalked me, haunted me, and watched my every move all the time. They knew my thoughts, actions, whereabouts, and movements. They could manipulate my emotions and thoughts at will. I could even sometimes hear them. They would speak to me in angry, torturous ways.

In this article, I will introduce you to several of these villains. Some of them are human while others are not. Though none of them exist, all of them were capable of inflicting indescribable pain upon me. These are the villains of schizophrenia.

Perched upon a rooftop lies a darkly cloaked man searching for me with heavy binoculars. He scans the horizon with them in search of my presence. Next to him is a sniper rifle, fully loaded and ready to kill. I have never met this man, but I know he exists. He will hunt me to the ends of the earth. He is the predator and I am the prey. He is my nemesis. 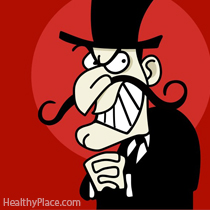 Thousands of miles above him, floats a large vessel in outer space filled with alien life forms conducting their nefarious plans. They have weaponry that can control the thoughts and actions of anyone on earth. These "thought weapons" can manipulate the ideas in my head. These thought weapons are pointed right at me. My thoughts are being muddled. I am their slave.

Back on earth, inside my skin, are robot insects capable of destroying me. They will eat at my heart, if I dare to tell the world the truth, if I dare to tell everyone that we are all under attack by insects. I want to cut them out but my fear of blood stops me. My head spins and heart pounds at the smell of death.

From an underground hideout sits a man with thousands of monitors who is searching for me. He and his group of highly trained secret agents have millions of cameras randomly scattered in search of me. They use facial recognition technology to try and pinpoint my location. They are on rooftops, in train stations and every conceivable nook and cranny. They will find me, I fear. One day they will find me and that will be the end.

Inside my house sits poison inside of a glass. It can be seen from the discoloration of the beverage. It is subtle, but I notice it. My roommate placed it there. If I were to drink it, I would begin to foam at the mouth. I would struggle for air as I gasped for breath. I won't let him trick me though. Leaving the kitchen, I threw the soda pop in the trash.

These troubling figures are brought about by this terrible disease. If you are reading this, it is possible that similar demons have haunted you or someone you know. (Schizophrenia and Psychosis: Hallucinations and Delusions) Each of these horrific entities are figments of a mind that wishes to destroy itself. It is important to know that you will never defeat them. You cannot defeat something that doesn’t exist. The only way to escape from the C.I.A. agents is to accept your illness and receive schizophrenia treatment. Only then will you defeat these horrible creatures. When they are defeated, you will see what they really are. Our brains are infected with schizophrenia, and this makes us vulnerable to our imagination. Remember that, and you will find a way to defeat your villains.

What Is Hearing the Voices Like With Schizophrenia?
Alcohol, Drugs and Schizophrenia Recovery
Frances
August, 12 2014 at 9:00 pm

Are the people all villains? I get the impression my schizophrenic daughter has good people in her world - who make her laugh and smile.

Hello,
We started a support site which is also a social network for those diagnosed with a Schizo Disorder and for those who help care for us.
Membership is free and we would love to have all who want to help fight stigma.
Thanks for posting and for voicing your story. It was heard today!
http://madmindchatter.com/

I like your site. The paranoia can make it difficult for us to "come forward" and fight the stigma. Someone has to do it though.

My son is fully medicated and compliant. However he still feels, at times people are spitting in his drinks, and often throws them out. On occasion he thinks that bugs are laying eggs in his brain. Is this comman?

Yes, he probably thinks the drinks have been poisoned. These are common beliefs that we can have.

There are two sides of me--the mystical shaman and logical psychologist. I have two separate practices so can share my perspective from each. Schizophrenia exists as Dan describes. He is the expert on this. As a shaman, I help all sorts of people release voices from entities, or disincarnate energies, that have attached to their energy field. The person feels different afterwards and that particular voice never returns. I see the entities as souls of people who are afraid to pass over to the other side and my job is to help them. They are easy to release and I don't charge for this work. Some people with schizophrenia have these entities as well. I know this is all weird and not in most people's belief systems but it works. I'm going out on a limb and writing because I believe this information needs to be out there. Sad for children who hear voices and are diagnosed schizophrenic and are put on heavy meds when it's not a brain issue. Read Edith Fiore The Unquiet Dead. Thanks Dan for your great contribution to our mental health field.

Wow! It must have been very hard to go to work or even function like that.

I would say impossible.