Overdoing It with Bipolar Comes with a Hefty Price 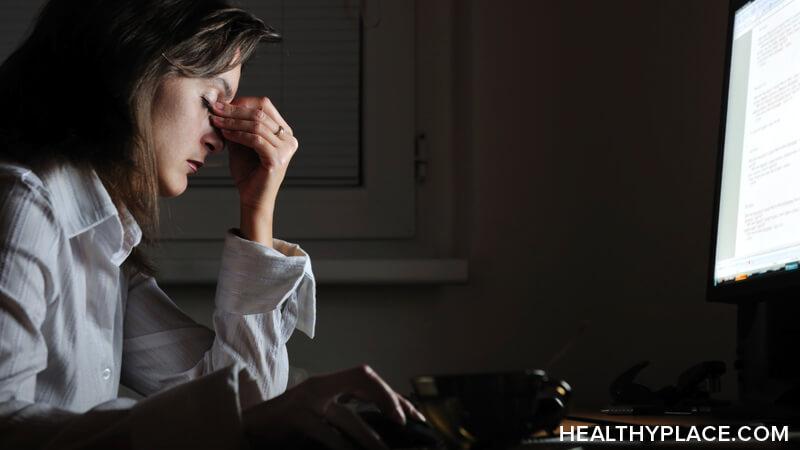 Overdoing it with bipolar is not mentally healthy. Overdoing it is something people are encouraged to do regularly. The 9:00 a.m.-5:00 p.m. workday is a laugh for many people as work follows them, via cell phone, home, to the gym, and to the park with the kids. And then there's cooking, cleaning, friends, obligations, hobbies, and more with which to contend. And that doesn't even take into account "side hustle," which, for some reason, we're all supposed to have now. And while some people can handle a go-go-go lifestyle, people with a serious mental illness certainly cannot. When you have bipolar disorder, overdoing it comes with a very hefty price.

Why Do People with Bipolar Want to Overdo It?

I think part of the danger is that people with bipolar disorder want to overdo it. I suspect this is because of two reasons:

The trouble is, we have an illness that creates boundaries that are stricter and more constricting than other people. Other people may be able to skimp on sleep without an effect greater than tiredness. Other people may be able to undergo months of extreme stress without serious negative effects taking hold. Both of these things are unlikely for people with bipolar disorder. Additional limits are also common. And it's normal to want to hide these limitations and show that you're "like everyone else" because you're feeling pressure to do so either from others or even just from yourself. No one wants to admit that they can't handle what other people can. No one wants to admit to being sick, no matter how sick a person may be.

What Is the Price for Overdoing It with Bipolar Disorder?

What I have noticed is that you'll suffer far more from overdoing it than you'll gain with bipolar disorder.

And, of course, those are just tiny examples. When you start to look at chronic stress environments, chronic sleep loss (Sleep Disorders Test), and other evidence of overdoing it, bipolar disorder can create full-on hypomanic, manic, or depressed episodes, and those episodes can require protracted time off or even a hospital stay. It has happened to me. This is something I know about.

In other words, it tends to be a short-term gain for long-term pain when it comes to overdoing it with bipolar disorder.

It isn't worth it.

As I stated above, we do still feel pressure to overdo it just like everyone else. But we don't pay the same price as everyone else. This is something we need to keep at the forefront of our minds. Most of us can't overdo it with bipolar disorder because we just can't afford it.

APA Reference
Tracy, N. (2022, February 11). Overdoing It with Bipolar Comes with a Hefty Price, HealthyPlace. Retrieved on 2022, June 28 from https://www.healthyplace.com/blogs/breakingbipolar/2022/2/overdoing-it-with-bipolar-comes-with-a-hefty-price

Do People with Bipolar Disorder Have Good Sex Lives?
Depression Says I Don't Care About Anything
Louise
April, 23 2022 at 8:21 am

Natasha I am reading your articles in tears...I am in the midst of a severe depression (I am bipolar) and waking up in the morning there is so much activity rumbling through my brain I just want it to stop. I feel better for short periods of time and then it comes back with a vengeance. After losing my job after a shutdown, I had a meltdown and was again admitted to hospital. Again the drugs didn't help and I lay in bed continuously anxious about the next job, about failing and being homeless. I go to over in my mind all of the negativity in my life and when I get to focus on the positives, there isn't much of that. All of the "you can do this" mantras and "you are a strong women" have become monotonous. Thoughts of driving myself to the hospital, sitting 5 hours in a paper suit and red socks (look everyone, I am crazy!!!) Then put into a skinny bed with scratchy sheets and blankets, no towels to shower, filthy floors and ants all over, others crying with maniacal laughs and relentless muttering and anger ,and wishing only for a cold glass of water....being asked 15 times a day if I am suicidal and doctor after doctor asking...so how are you feeling, tell me about your mood. Is all of this supposed to help me feel better??? Here take this pill. What do you think, do you want to try it? What are all of the other pills you are on??? If I could be admitted to a clean facility that respected the dignity of their patients and were experts in the field of mental illness, I would go. The facilities we have here add to the anxiety and make it more difficult to cope I think about the shower...the floor blackened with mold and crumbling apart, the sliver of soap and drying myself off with 6 tablecloths as there were no towels. Wanting a glass of cold water but waiting for the nurse to stop texting on his phone. The nurse who cursed because my line fell out when I turned over and she flipped me back and scolded me. So of I reveal my true feelings of what my mind is dealing with, back I go to live through this again. I know I am in a bad spot. I pray for those few lapses of release, the sleep that is the escape. The trying over and over again to not think of worst case scenarios. The wanting to get up in the morning but the body is heavy and if I can just close my eyes and have that sleep...that momentary escape...please let it come.

Hi Louise,
I'm going to try to reply to you without the monotonous platitudes.
I'm so sorry you're going through that right now. That is unbelievably hard. You articulate so clearly what you've been through, what you're going through, and what so many people go through. That's a gift, believe it or not. I'm familiar with that gift and I would happily give it back to feel better, but seeing as I don't have a receipt, I'm stuck with it as are you; so, try to appreciate it.
I'm not sure what to suggest to you. It sounds like you have a very good handle on your options. Maybe it's time for a referral to a new doctor? Is there a place that specializes in mood disorders that you can go to? Is there something new like dialectical behavior therapy (DBT) or esketamine (Spravato) or even electroconvulsive therapy (ECT) to try? I hear what you're saying about the facility where you've been, is another one an option for you?
Also, I hope you're leaning on others for support right now. You're in a very hard time and that's when you need others the most. I hope you're not trying to hold all that darkness in.
And while you may be tired of the "you are a strong woman" mantras (understandably), I'm going to say it anyway: You are a strong woman. You're amazing. It can be next to impossibly hard to live with this disorder, but you're doing it. I know how bad it can feel. I know how useless. But your fight innately matters as do you.
I wish you the best possible,
- Natasha Tracy