Bipolar and Irritation -- Don't Talk to Me 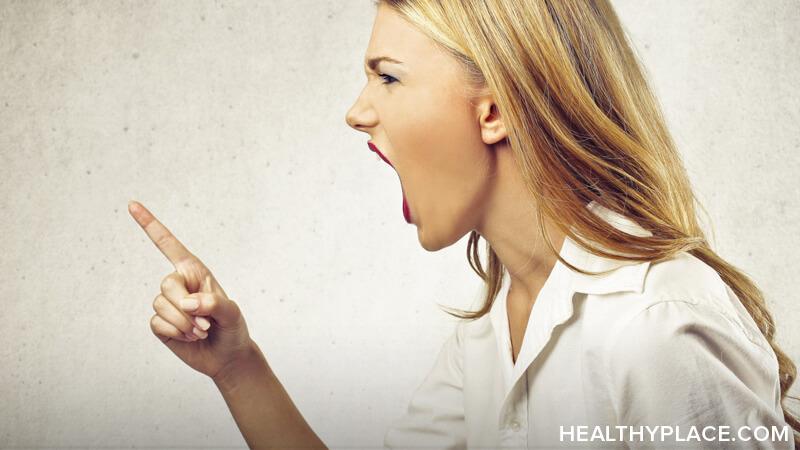 Bipolar often makes me very irritated, and I suggest you not talk to me about it. Okay, I'm just kidding about that last part, but what I will say is that when I'm highly irritated because of bipolar disorder, I don't want to talk about it or anything else. And while irritation doesn't sound like the worst bipolar symptom, I can attest to the fact that it definitely impacts one's quality of life.

I'm sure irritability varies from person to person, but for me, it feels like pokers of angry fire on every inch of my flesh. It feels like humanity is a saw blade rotating against my soul. The existence of other people annoys me, and a human doing anything irritates me. It makes me want to scream at anyone who dares cross my path.

To be clear, this is not a minor event. This is not normal. And this is not brought about by anything. My irritation has no cause (other than bipolar). It does often feel like anger, and to other people, I think it can look like anger too.

I have tremendous control over my own behavior, and this protects others, but that doesn't mean, however, that this bubbling bile is not inside me burning to get out. If I let my irritability have its way, I would be screaming at people and my cats and throwing things against the wall.

How to Handle Bipolar and Irritation

The thing that I am very conscious of is that no person deserves this put upon them. Of course, it isn't appropriate to throw things against a wall. Of course, it isn't okay to snap at people for no reason. Of course, I shouldn't take out my own crazy feelings on other people. Doing that is a good way to get rid of the people around you, maybe for good, which is never the best idea.

As usual, the first thing to do about irritation is to realize it's there. You need insight into what's happening in your bipolar brain before you can deal with it. So, recognize when the bipolar disorder is causing irritation, and the outside world is not.

When you realize irritation is sandpaper against your insides, practice breathing. Really, I mean it. Mindful breathing -- breathing where you focus on your breath and nothing else -- can truly relieve the pointy irritation for a moment, so mindfully breathe as much as you can as often as you can. This is the number one thing I do on a daily basis to deal with so much that bipolar throws at me.

Yoga, stretching exercises and meditation can also all be helpful when dealing with bipolar irritation.

If you're scared you're going to take your irritability out on others, try to find some time and space just for you. Of course, this isn't always going to be possible. If you need to interact with others, let them know how you're feeling and that it isn't their fault. People can help you work through many things if you just lean on them and let them know what's really happening.

And finally, because irritation is a bipolar symptom, make sure and tell your doctor about it -- even make a special call to him or her if it looks like it is the tip of a mood switch. It should be taken as seriously as any other mood symptom as it can be just be beginning. Your treatment may need to be changed based on the appearance of serious irritability.

Finally, while it's important not to take the irritation out on others, you shouldn't take it out on yourself either. High degrees of irritation beg for some response, even if that response is harmful to you. Don't let this happen. Remember, this is a bipolar symptom and not your fault. You are not an irritable person. You are a person with an illness. And this symptom can be treated, just like any other.