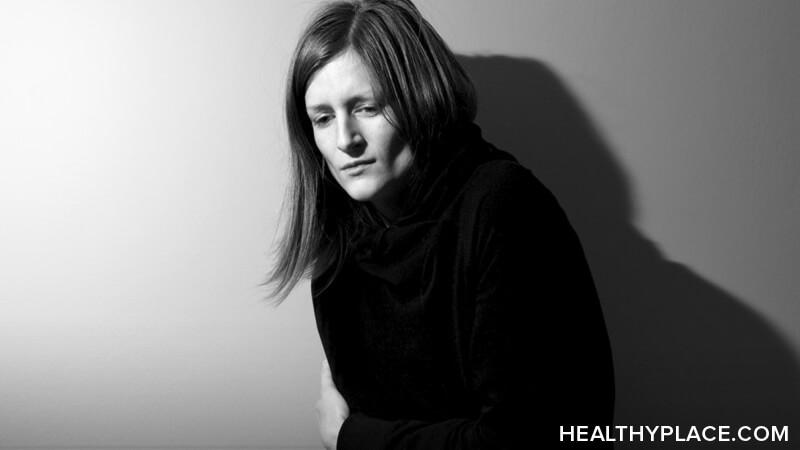 Bipolar disorders and anxiety are frequent bedfellows. In fact, anxiety and anxiety disorders occur in more than half of those with bipolar type I, according to the paper, "The Importance of Anxiety States in Bipolar Disorder."1 And I am one of those who experience anxiety in bipolar disorder. Whether your anxiety comes in the form of a specific disorder, or it's just symptoms of anxiety, I can attest to the fact that anxiety affects bipolar disorder, and it's not in good ways.

How Anxiety Affects My Bipolar Disorder

I suppose I should say that anxiety affects bipolar disorder, and bipolar disorder affects anxiety. Both sides of that relationship are difficult to live with. I find that anxiety tends to be the worst during bipolar mixed moods, and it makes those mixed moods worse. A mixed mood is when you have symptoms of mania or hypomania at the same time as symptoms of depression. And when you have anxiety with a mixed mood, it seems to turn up the symptoms of that mixed mood. Anxiety seems to increase my physical and cognitive agitation (known as psychomotor agitation, a depression symptom) a lot and, well, makes me want to rip strips of my skin off using my fingernails -- while pacing rapidly, back and forth,

The anxiety in bipolar also seems to interact with racing thoughts (a symptom of hypomania or mania) such that my racing thoughts become almost exclusively anxious ones.

All in all, anxiety does not have a positive effect on bipolar and bipolar disorder doesn't have anxiety either. I find the combination very difficult to live with.

How Rest Affects my Bipolar and Anxiety

Rest, sleep, is universally helpful in whatever ails you, in my opinion. And I know that for me, sleep is critical to bipolar disorder wellness. I have to prioritize over almost everything.

That said, my experiences with sleep and anxiety are different. Watch this video for information on how rest affects my anxiety:

And while we're talking about anxiety and bipolar disorder, I think it's important to point out that anxiety in bipolar disorder can actually increase suicidality and risk of suicide, although the specific relationship is unclear. One paper states:2

How to Treat Anxiety in Bipolar Disorder

The typical treatment for anxiety is certain antidepressants. However, those may not be an option in bipolar disorder as antidepressants can induce mood-switching, and, of course, this is always to be avoided. Additionally, doctors generally want to avoid dependence on benzodiazepines as they are considered addictive.3

That leaves us with, yup, atypical antipsychotics and anticonvulsants. One 2013 paper notes that there is emerging evidence for olanzapine (Zyprexa) and lamotrigine (Lamictal) in the treatment of anxiety in bipolar disorder.3

No matter what, though, if you're experiencing anxiety with bipolar disorder, make sure to discuss it with your doctor. It is a big deal, can hugely affect you, and absolutely needs treatment.

Hi Natasha! My name is BB Gomez and your message made a lot of sense to me. No, you are not alone in this! I slept more last night and today I’m a train wreck! I’m so anxious I feel like I want to jump out of my skin! I need to talk to my Dr and see what I can do to balance my sleep hygiene. Thank you so much for sharing!

I find mania can be triggered from any number of things, too much coffee/sugar, stress/anxiety, fun/excitement, etc
Practicing moderation, meditation, prayer, letting go of useless worries helps to levels out my mood and cope much better
Taking care of not only my body and mind (gut/brain health) but also making time to nourish my soul as well.
I recently came across this youtube video of a man with a very colourful/shady past. If there is hope for him there is hope for anyone https://m.youtube.com/watch?v=VqgTMPj6Zhc (By the way, I am not a catholic, I’m not trying to convert anyone, but this guy is definitely worth listening to)