When Bipolar Ruins Your Vacation

How Can Bipolar Ruin A Vacation?

Last week I visited New York. It’s a great city with so much to do. I had plans to meet this person here and have dinner there and shop everywhere, all surrounding the work I was there to actually do. And I made the trip, which takes forever from the West Coast, successfully, if rather exhaustedly. And then I spent the next day meeting, filming, panelling and eating some fabulous food.

The next day was great, too. But then, on the third day, I woke up and bipolar was everywhere. I have these times when I just feel so physically ill do to the mental illness that I can’t get out of bed – and this was one of those times. Every muscle I had hurt; I was beyond all synonyms for tired; I was dizzy; I had a headache; all I wanted to do was cry, and I couldn’t eat the lovely frangipane French toast brought to me by the in-room dining staff. In short, bipolar had taken over my body, including most of my brain.

Bipolar and A Ruined Vacation Day

So I said to myself that if I just got a couple of extra hours of sleep, I would be fine and would still be able to go about my travel plans. This did not work. I mean, I laid in bed for two hours but then I couldn’t move for two hours after that or two hours after that and even the notion of leaving the room seemed laughable. Bipolar ruined my vacation that day. And I didn’t really have a day to spare. (Do you have any idea how expensive it is to stay in New York?)

Blaming Myself for the Ruined Vacation Thanks to Bipolar 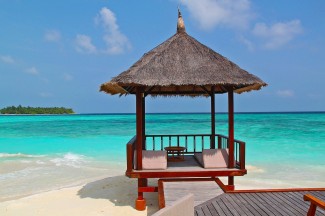 So initially I did what any good depressed bipolar would do – I blamed myself. I got mad at myself for letting my bipolar take over and ruin my chance to do what I wanted to do. I had already given into it the previous days, resting when it demanded, but now I had given it an entire, precious, New York day. How stupid and weak was I?

But, of course, this was no more my fault than it would it would have been had my pancreas burst. It is not my fault when my bipolar acts up. It just isn’t. I do what I can to prevent it but my brain is out of my hands, much like my pancreas (A Guide To Overcoming Self-Stigma).

As the day droned on, I tried to salvage something of it and failed miserably. In the end, I did end up eating some dinner and packing for my trip home the next day. That was something that existed outside of the bed, so I guess it was a tiny win.

But what I learned is this: sometimes bipolar ruins a vacation. In this case I didn’t see it coming. I was fine the day before but then, suddenly, I wasn’t. I suspect all the running around and New Yorking I had done the previous two days had simply done me in. I guess predictable, for me, but not the kind of thing I have a real interest in predicting.

What may have been better on my part might have been less New Yorking the two days prior. At the time, I didn’t think I was pushing it that hard but it seems I was wrong. If I had spread things out a little bit more, then maybe I wouldn’t have absolutely crashed and burned on the third day.

But then again, maybe I would have. Maybe no matter what I did, bipolar was going to ruin the third day of my vacation anyway. Maybe the time change alone was too much (even though I had prepared for it for weeks) or maybe the lack of my bipolar routine did it. I really have no idea. I just know that bipolar ruined my vacation day and it wasn’t my fault.

What I have to do, then, is give myself a break. If I realize that I have bipolar and I realize that these days happen, then I must realize that beating myself up about them isn’t helpful. Yes, I would have deeply preferred a different outcome but that just didn’t happen. Stuff happens. Bipolar happens. We really just have to roll with it because there’s little else to do.

But I will say one good thing about the ruined vacation day – had that sickness hit me the following day, which was my travel day – that day would have been interminable as I wouldn’t have been able to get to a bed. I have no idea how I would have gotten up at 4:45 a.m. (like I had to) and do what was required to get myself home. So I can be grateful that I didn’t have to have that experience.

So bipolar ruined one of my vacation days but it could have been worse. My bipolar could have ruined all my travel plans (it’s quite capable of that sort of thing). But it didn’t. And for that I am grateful.

Bipolar Triggers You Can’t Control
Why Planning Ahead with Bipolar Is Tough
JR
October, 27 2015 at 6:11 am

I must say, Natasha, I commend you and the absence of your detailed medicine cabinet within your post! :)
Bipolar doesn't ruin anything. :-(
I was enjoying my daily shower one morning--dwelling in deep thought as usual. As I hugged my towel I thought to myself, "the mind doesn't mind undermining the mind especially if ones mind doesn't mind". One if the major contributive factors in managing this disorder is willingness. It will control ones mind if he/she allows it to do so. Seemingly, after a while, it becomes a precious gem, dazzling as the days fly by until mania disrupts. It may take days or months on hand for oneself to break. Also known as the cycle. I must validate your symptoms as the struggle is beyond real! I'd find myself many(beyond many) mornings mentally imprisoned, physically weak, and just flat out depressed. I missed classes, special events, family time, pushed away EVERYONE due to this issue. It's not "laziness" or "victimizing" oneself but it truly takes control--because it, BP, popped up unexpectedly. As you may know, sudden judgement impairment is a common disruption within itself. The mind knows its happy medium (manic and/or depressed state of mind) to help mask both the physical and mental pain. The mentality leads one into beliving that it, BP 1/2, is his/her BFF.
Smiling may seem quite the task on some days.
But that's okay.
It's okay not to be okay.
Everything will be okay.
Everything is okay.
Always remind yourself everyday.
You're okay.
Okay?
Now let's begin by enjoying this chilly day, Tuesday!
JinNC

Right on, Sarah!!
I really hand it to you for going, Natasha! I don't anymore. I always end up crashing and burning and taking a long time to get back to my usual trudge. One friend bugs me to go 45 minutes to her apt and even that is a huge chore. That's the trouble with having friends, hehe!

You've been having a hard time of it lately from the sounds of things. The fact that you made it to NY, did your work, made it home, is a great big win.
I find that if I'm recovering, and I do really well for a day or two, take on more than usual, than by the third day I'm having a very bad day indeed.
I think the brain wants to stay the way it has been, so if we stretch it, it bounces back to where it was with interest, but since we have stretched it, it will bounce back in recovery also.

Natasha, I am with you on this. Although I didn't believe it. I was blissfully ignorant. I was diagnosed with BP in 2010. It was a really bad first BP/psychotic episode, requiring hospitalization for quite some time. I basically withdrew from anyone and everything. And ended up in the hospital several other times.
Took a LONG-assed time to get me to even anything close to stable. I don't remember most of it. I was gone for maybe two years.
Then my pdoc got me on a med cocktail that seemed to help. I was doing much better, but compare that to where I was and well...
My hubby wanted to go on vaca. Like really badly. I understood, he had endured so much and just wanted a break. I was excited to go, I had been used to going on tropical vacas and always loved them. So we booked it. For a whole week. We were headed to Mexico!
I was OK with packing, had done it way early. Bought a new suit and could not wait to go!
Then the day arrived. At the airport I was very shaky and pretty much hypomanic. Once we actually boarded and situated, I felt a bit better. So flight went "okish" but it's stressful with an 8yo boy. I was doing that "okish" until he started misbehaving and got bored. I was barely holding on.
Let's just short this. By the time we actually got to our hotel, I was visibly shaking and talking word-garbage. The trip was just too much. Hubby wanted to just drop the luggage and get going. I was completely out of control. I told them to please go, I just needed quiet and calm. Took 2mg of Xanax to even start to calm. I stayed in that room for two days. But by early afternoon everyday after, I was always exhausted. I felt bad but I just couldn't do it. So it was memorable but not in a good way. It was a disaster.
We've decided that small vaca's near home MIGHT be ok but I'm not willing to try it anytime soon.