Dealing with Bipolar and Pressure

Last week I was in Los Angeles accepting a fairly prestigious award called the Beatrice Stern Media award. It’s an Erasing the Stigma Leadership award given out by Didi Hirsch – a large mental health charity in LA. And while I was (and am) extremely honoured to be accepting such an award, I felt serious pressure when it came time for the acceptance speech. I just kept thinking about how if I didn’t do it well, they would think they would have made a mistake in giving it to me in the first place. The organization had done all the work of flying me down there and putting me up at the Beverly Hilton all to be disappointed with the results.

The pressure was pretty immense. I was giving my acceptance speech in the same place where the Golden Globes are held, in front of over 500 people – most of whom were pretty darn important as tickets were $300 each (it’s also a fundraiser for Didi Hirsch). I was to be seen on 40-foot screens, give interviews and do red carpet pictures. The whole thing was overwhelming.

Sometimes that kind of pressure would bring about bipolar hypomania but this time, it just brought up excess emotion and anxiety. 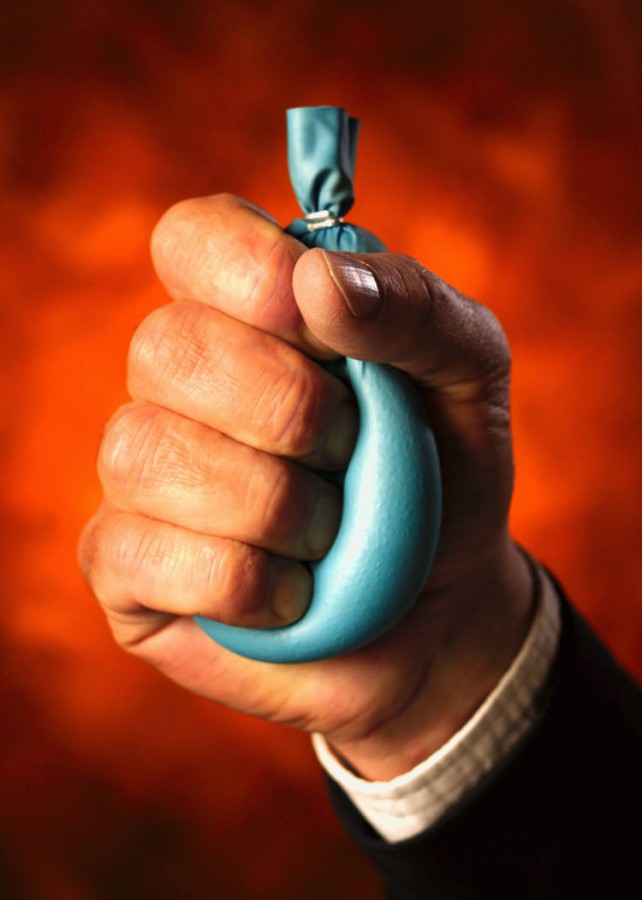 What I noticed most was how seriously emotional I was. I guess it felt like every molecule of my body was trying desperately to hold it together because of the anxiety and I had nothing left in the tank to suppress my bipolar emotions. CEO and President of Didi Hirsch, Kita Curry, gave a speech about her struggles with depression and suicide and I had to blink away the tears. Granted, she was a good speaker, but still, it was an overreaction on my part – partly because I know what it’s like to be in that situation and partly just because my bipolar tends to exaggerate emotion.

I found myself before my speech unstoppably pacing the in the green room unable to make conversation with the other folks back there. I’m pretty sure some of them spoke to me but it sounded like they were talking through a very long tunnel and I couldn’t quite get a hold of, or understand, what they were saying.

Okay, I admit, I’m very good at hiding how I’m feeling. All that pressure and anxiety is invisible to others, as a general rule (unless you saw the nonresponsive pacing). When I got on stage, the speech was nearly flawless and people laughed and applauded in all the right places. It was a success.

For me, handling pressure with bipolar disorder is a matter of three things: acceptance, preparation and dissociation. Note, I’m not suggesting this is the right way to handle it, I’m just saying it’s the way I do.

Acceptance of Pressure and Bipolar

The pressure and the bipolar reactions weren’t a shocker to me – I was expecting them. Feeling caught in the iron grip of a bipolar emotion isn’t exactly a new experience. What I find important is recognizing that the response will take place. Yes, I know I will feel a massive exaggeration of emotion given excess pressure. I accept that.

And, knowing that there will be pressure, I try to prepare for it. I try to warn my brain ahead of time, “Brain, remember, you’re going to get all crazy. Try to chill a little.” I practice my speech. I get it put in the teleprompter. I ask lots of questions. I do a run-through. I try to look pretty so I’m not feeling self-conscious (professional hair and makeup was offered). I try to take my mind off of it by doing something distracting.

And then, when the time comes, I pretty much dissociate. There’s some part of my mind that just takes control of the situation. It tells my brain to sit down and shut up and runs the show for the amount of time I’m under the lights. I don’t know how I do this; I only know that I do. It’s a neat trick that I’m not saying is a great idea – I’m just saying it gets me through many-a-pickle.

And then, when I got off stage, all I wanted to do was bawl my eyes out. It’s not because anything went wrong, it’s just because all that pent-up emotion has to come out somewhere and it always seems to pop out of my eyeballs. The other people in the green room were busy making conversation with and congratulating me and all I could think about was how much I needed to cry.

All that being said, the pressure is all worth it when you get to go to an event like that and accept an honour that reminds you why you do the work you do. People came up to me afterwards and said such kind things and one woman almost cried. So while the pressure itself may not be positive – the outcome certainly can be.

(By the way, I woke up the next day feeling like I had a massive hangover, in spite of having drunk virtually nothing. It was an adrenaline/endorphin hangover. Yes, that’s definitely a thing.)

Are You Doing Badly After The Boston Marathon Bombings?
Is There Bipolar Stigma in the Workplace?
Gail
June, 27 2017 at 3:31 pm

MAJOR problem with bipolar pressure, especially with appointments and getting a bath. Cripples me. To keep going have to cry. Also have OCD for lots of overthinking. HELP!

Hi Gail,
I'm sorry you're feeling this way right now. I know how hard it is.
You didn't say whether you are getting help. I highly recommend you seek therapy from an experience psychologist and see a psychiatrist for possible medication.
You can feel better but you need help.
- Natasha Tracy

I was under stress. For the past month. I had a wedding shower and my son's wedding. In addition, I had to deal with my mom's Alzheimers. She was upset and agitated and I couldn't reason with her. I did try to rest and meditate everyday which helped. After the wedding, I spent 2 days doing nothing. I had wonderful memories of the wedding, but my thoughts kept returning to my mom's behavior. It's been almost 2 weeks since the wedding and I finally am feeling more energetic. I also have to take a break from my mom.
If my other son gets married I m going to encourage him to elope.
My therapist said I can dissociate, but I don't think I do it anymore.

Natasha
Congratulations on your award!!! You deserve it for all the hard work you do helping others.
As for me, what I've noticed is that I'm much better at dealing with stress and pressure than I used to be since being medicated for bipolar and GAD. The medication calms me down A LOT. It's a big reason why I choose to stay on it, one of the perks I guess
I also used to be in toastmasters. What helped me relax was to think of the audience as a group of friends I was relaying something to. Meditating beforehand was something that also helped

First, congrats on that award. I read everything you write and you deserve it. You are an inspiration to a lot of people. Second, I'm so glad you wrote this article. It made me aware of some of my reactions to stress and made me realize why I have them. I feel much more validated. I am going to work on looking at past reactions and something along the lines of "what to expect" so that I will be more prepared to handle things in the future.

Congrats!
I was just writing about how difficult it is (I have bipolar, GAD, and panic) to withstand the pressure of performance. Not the sort you have just shared. I used to give speeches and presentations, and went into a dissociation type auto-pilot. I am asking/sharing about how extremely difficult it is to "perform" at family events, where your feelings are viewed as unfounded. Support is exerted as encouragement and love. ("Your bipolar is being treated and non factor.") I attended a shower for relative, for many reasons did not want to go. My son insisted I go, and "supported" me with love. Not going was not an option. All the getting ready, going, and giving an Academy Award performance,internally pulling together everything you have, has taken a terrible toll. Yet, I am expected to be so glad I went to a simple wedding shower. I cried on the way home, and haven't been functioning over a week. I have extreme anxiety/panic, and am isolating. This happens when I am expected to get up, show up, and enjoy these events because I love my adult son and grandkids, and should be able to do so.(I understand how your pressure was worth it, receiving such award!!) There are other stressors for me in regards to my family due to bipolar. I just worry how I am going to handle "Bipolar Pressure" over what others view as common experiences. I haven't seen this topic addressed until today. Thank you!!!