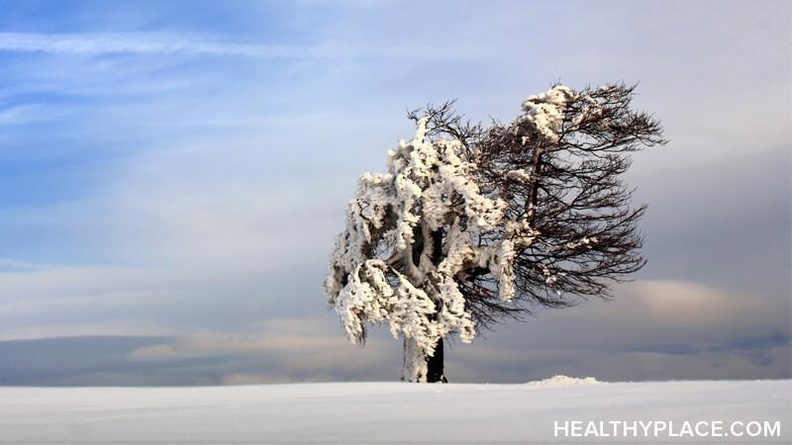 I have been burdened with side effects since the day I took my first psychotropic medication some 13 years ago. At that time the medication I was on made it impossible for me to be awake, pretty much ever. I had no idea how much hell I was in for and my doctor didn't seem to believe me when I told him about it. So I did the responsible thing - I just kept taking the medication, hoped the treatment would work and that the side effects would go away.

But that's mostly because I didn't know what I was doing. Today I know that severe side effects are something that we choose and are not something that is thrust upon us. We choose what we can live with, even tacitly, always have, always will.

Today I still suffer with a range of side effects. Nothing quite so debilitating as not being able to wake up, but other things like headaches, cramps, fogginess, fatigue and body temperature dysregulation. But I have chosen these side effects. Which is to say that I prefer the side effects to not being on the medication. But that's me.

On the other hand, I have stopped medication because the side effects of those antipsychotics were not tolerable. Some medications make me feel so ill physically that their payoff (or lack thereof) doesn't compensate for it. One that made me collapse in the kitchen at work comes to mind. (Although I even stuck with that one for months. I'm what you might call a trooper.)

Yes, We Choose Our Side Effects

But no matter how bad side effects are, I know that I can end them at any time by going off the medication. That is always my choice. I'm not "stuck" with them. I've chosen them. Because I feel that life, however imperfect, is better on the medication than off.

Well people tend not to understand this. Non-sick people don't seem to fathom a disease that is so bad that you would rather have headaches, nausea, cold hands, dizziness and so on than have to deal with the disease symptoms. I cannot tell you the number of people who have asked me, "If it's so bad, why do you stay on the drugs?"

APA Reference
Tracy, N. (2011, November 17). You Don't Have to Live with Side Effects but You Might Choose To, HealthyPlace. Retrieved on 2022, August 13 from https://www.healthyplace.com/blogs/breakingbipolar/2011/11/you-dont-have-to-live-with-side-effects-but-you-might-choose-to

I have yet to figure out which if my psych meds has the side effect of hypoglycemia, but I'm on Geodon, Lamictal and Zoloft for my bipolar. It's got to be one of those, though I'm also on Mirapex for RLS, and several GI meds, that I'm sure don't cause hypoglycemia, which ihas become a debilitating nuisance in my every day life. My shrink is zero help...

Hi Jake,
Sounds like you make a good call there.
- Natasha

Hi Amanda,
Well, I can understand your point about the term "side effects." It's why they are technically called "adverse effects" in the medical world, we just don't normally say that in common conversation.
And yes, we absolutely are the experts on our own lives. Good doctors know this and if they don't we need to remind them.
- Natasha

Yes!
I've been on so many different medications while trying. to find one that works. Quetiapine made me numb and sleep for my country and Aripiprazole gave me mixed states which I'd never had before. I agree with Amanda that psychs seem to just want to dump us on a med and make us go away, and won't work with us to find something that allows us to rebuild.
As for me, I'm now on Depakote. I get regular bruising, but this has been the best medication by far for stability. I accept the trade off of sanity for having my legs look good in a skirt!

I made a choice with my Doctors support to dump "Benzos" which I take for parasomnias and just take a mood-stabilizer. Now I am back to my old sleeping pattern which can be disjointed however I don't have a job so it is no issue.
I just have to make sure I get enough sleep in a twenty four hour period so as not to de-stabilize. I have had to dump coffee from my diet because it was really making me feel anxious without the Clonazapam to balance out the caffeine. Good blog. Cheers.

I keep wondering why they are called "side effects" when in reality they are the effects of the medication. "side effects" are just some of the many effects of using psychotropic medications. I am on the same page as you and without a doubt, the biggest "side effect" of not being on medication is death!
So many shrinks think those of us who share the diagnosis of bipolar come off our meds because we miss the highs of mania. You might disagree with me but frankly, the mania sucks most of the time. It is when I have done the most long-term damage to my life, self esteem, finances, work place, and meaningful relationships. The doctors are always looking backwards at our most recent crisis and medicating that with the notion that sustaining us on the medication that stabilized us during that episode will prevent another one. We, however, need to look forward towards a real recovery. A recovery that includes having a life worth living. We can't look forward to that life feeling as drugged and zombied-out by the medication prescribed during the height of a bipolar episode. I wish more doctors would work as an ally and collaborator with us. Tell us that we won't feel like that forever and that we won't need to be on that dosage our entire life. Medications CAN be titrated down, new and different medications can be tried if the "side effects" become intolerable. No doubt the doctors are experts at treating bipolar but too often they forget that WE are the experts about our own life.
Hmmmm how did I segue on to that??? When you figure that out, email me ;-)
As always, I thank you for all your insights and your eloquence!