There is a common refrain that if you looked in the DSM, everyone would have some mental disorder. And in point of fact, many symptoms are fairly generic and can be attributed to many. Fatigue, insomnia, thoughts of death, loss of pleasure and weight loss are part of the depression diagnosis.

But the part no one seems to remember is what’s under that,

The symptoms cause clinically significant distress or impairment in social, occupational, or other important areas of functioning.

In my experience no one likes treatment for mental illness. No one says, “please turn down my dopamine; turn up my serotonin,” or otherwise mess with the chemical reactions going on in the most complex part of the body.

So, in my experience, people don’t tend to get, and stay on, treatment they don’t need. The treatment sucks too much. Very few people think, “gee, I’m having a great day, why don’t I pop by the doctor’s for a prescription?”

Why Do People Seek Treatment for Mental Illness?

It’s not enough to just have a mental illness, you have actually want to treat it as well. Doctors don’t arrive at your front door with Prozac. You have to go out and get it. You have to bother making an appointment, explaining your problem to a doctor, the doctor agreeing and writing a script for you, you filling it at the drug store, and then paying for it. It’s a lot of bother. Many sick people don’t want to do that for a whole host of reasons.

Which brings me to a point: no one said you have to get treatment for a mental illness.

Now don’t get me wrong, if you are a danger to yourself or someone else, someone will likely try to treat you, but outside of that, you’re pretty much on your own. 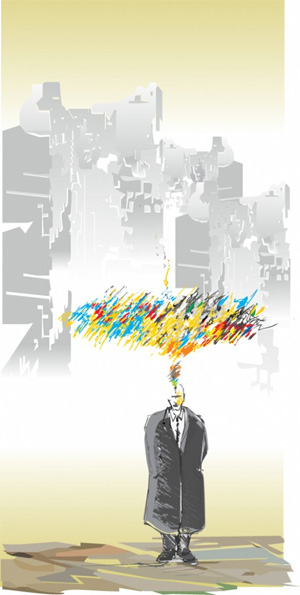 So then, not only do people have to be sick, want to get treated and go to actually get treatment. Generally they only want this because the mental illness is causing a problem in their life (thus meeting the noted criteria in the DSM). If you happen to see little green men, and talk to little green men, but it doesn’t impair your life, well then I guess you’ve just made some new, green friends.

But that just isn’t what happens with a mental illness. At least, not one that people want to treat. People don’t just see little green men in passing and get on with their day. No, they believe little green men are invading the planet and the only way they can be stopped is to aluminum foil all the windows in the whole world. And typically, people are highly distressed by this type of idea.

People don’t just cry at a long distance carrier commercial and go to the doctor. No, people actively hate their lives, hate themselves, don’t bathe, won’t get out of bed, don’t take care of their children and long to die.

See, that’s when it becomes a problem.

I get why people say the whole world is becoming medicated. I understand people would like to see a decrease in the number of prescriptions written. Personally, I don’t think that would be such a bad idea myself.

But make no mistake, people with mental illness aren’t taking meds because it’s a party in their brain and everyone’s invited. They’re getting treatment because their mental illness was ruining their lives.

Mental Illness and Crazy: Creativity and Medication
Bipolar Disorder and Treatment Stigma
Peggy
May, 9 2016 at 10:57 pm

My son has mental illness . It breaks my heart to see him struggle with his Meds , he stops them , looses them , and when he is manic he calls me bad names. Lies to people , he will tell them I won't give him his Meds and that's why he's acting the way he does . Screaming and yelling in public telling people he's having a diabetic episode. He's not diabetic and insists he has kidney and liver problems his bloodwork says he's healthy. He has even told people I forced my gabapenton on him. Which is a lie. He's 25 yrs old and on disability SSI, and someone called social services on me and a social worker came to my house to investigate me. I can go on and on. I just don't know what to do. The whole situation is making me depressed and I just would like to run away . I can't stop crying I love my son so much he's my world. He blames me for his mental illness.

I'm someone who's suffered from mental illness pretty much my whole life.
It's too much of a long story to write what the hell happened, too much has happened. Anyway, I can tell you that when it's serious, it will 100% destroy or take your life. That's what's happening to me and to be honest, you could be reading a post written by someone who's currently dead because I'm not sure how much longer I can take this.
I've suffered for years. I don't drink or use drugs, I exercise every day, I sleep right, I eat well, I eliminate unnecessary stress, etc. yet absolutely NOTHING has gotten rid of my problem so really the only option I have left is death.
I'm about to end up on the street because my lease is up and I haven't been able to hold down a job because of my mental issues. I'm choking up as I'm writing this because I'm thinking about my life the past several years and there hasn't been a day or a second that went by where I'm not affected. This sucks and it's not fair.
It's destroyed my relationships and friendships with many people. It's permanently damaged my friendship with my parents and sister, even though they often remind me that they love me. I just can't handle this any more. I've gotten help and have some right now, yet it's not working. Nothing works. I've tried everything and nothing makes this torture go away I feel like I'm going crazy. Scratch that, I KNOW I've gone crazy. I'm aware of everything that's happening around me and my own behavior, yet I feel like I have no control. I have sporadic and extreme behavior which I regret later all the time. I have explainable, random and extreme emotions. Extreme constant paranoia, jumpiness, hypervigilence, rage and outbursts, constant feeling of pressure in my left side of the head, shortness of breath because of intense anxiety, panic attacks in my sleep which cause me bodily harm, general erratic behavior etc.
No one will ever understand what I'm going through and strangers don't care anyway.
I hope my next life is better then this one.

Hi Collin,
I'm so sorry you're in that situation. I'm sure it is unimaginably difficult.
I know you say your only option is death but I don't believe that to be true. Avail yourself of some local charities or governmental resources and find low-cost housing.
I can't promise you that everything will get better -- I don't have that power, but things do change when you reach out somewhere new.
Please see our resources page here or look for resources in your local community: http://www.healthyplace.com/other-info/resources/mental-health-hotline-numbers-and-referr…
- Natasha Tracy

I take my meds on and off. I felt really stupid when I realized my risperidone far from just being antimanic and antipsychotic is quite often used as monotherapy for psychotic depression and that when I did start taking it my depression cleared up completely within a week. I felt an idiot for not having given it a proper chance. I did take it as prescribed during a manic episode but then I had gone so intensely manic I was just off the scale, yelling like a wild animal. If I'd not lived alone I'd definitely have been dragged into hospital. Nobody could live with someone behaving the way I was behaving back then! Right now I'm on what may or may not be the tail end of hypomania (I can't tell whether I'm just physically tired or it's really wearing off) and I still don't want to take the pills, basically because I spent years feeling miserable, with some depressive phases lasting 2 and 3 years, that when the hypo/mania comes I embrace it wholeheartedly and thoroughly enjoy being euphoric and over the top. I do get pretty irritable, sometimes to the point of rage, but as long as I haven't totally lost my mind (which I did once) I'd far far rather be manic than depressed. As for normality I just do not get normality for any length of time. I'm constantly up, down or sideways so I just accept that for how I am. Personally I think anyone who manages to live in today's crazy world without being driven mentally ill or to drugs or suicide or all 3 has something far more seriously wrong with them than you or I do!

thank you thank you for this plain english explanation. good enough to be shared. well done Natasha.

Hi Martha,
"impaired functioning creating pathology in mental illness as opposed to behavioral differences that don’t cause impairment"
Yeah, those are big words and hard to explain.
My favorite phrase is the title of the piece. It really tells you everything you need to know.
I'm glad I could help.
- Natasha

Hi Thom1,
It's true, it's best if people get treated at the early warning signs stage, I agree. Statistically they have better outcomes.
But realistically, few people are going to get treatment (initially) until something in their life falls apart. Once one episode has occurred, people are much more on top of it, but early on, it's quite a bit to ask.
Learn to love life? Kind of a high bar, but one I think it's worth shooting for. And if you're thinking it's possible, then I have no doubt that it is.
- Natasha

Brilliant post! So, so true. It's only been 6 months since I was diagnosed. I sought treatment for something that was wrong because it was ruining my life. Only then did I find out it was Mental Illness.

Awesome blog as usual, but this one really stands out for me. I've spent what feels like days trying to explain the concept of impaired functioning creating pathology in mental illness as opposed to behavioral differences that don't cause impairment. You do it beautifully. Thanks for writing this.

There;s a lot to be said for prophylatic treatment when early warning signs occur, whether through networking, peer support, case management and med consults. Recognition of a slippery slope is key to early intervention. Sounds like a formula for success, but too often we go to that place, as you say, that the despair is so deep that we "hate" our lives. The inability to function without any joy in our lives can enter a form of stasis, and we with all our supports are stymied because nothing seems to make us feel okay again. But somewhere, in my occipital lobe, I come to remember how to "fight the good fight." Steps moving forward become a march toward a lifting of symptoms, and making connections to things that matter. This change of season is helping me to make that happen; longer days and venturing into the sun make walking, going to the gym, more important and rewarding. Gradually, I'm thinking I might learn to love my life again.