The Power of Grace and Forgiveness

Good news--my friend Ann from AA is okay. Her house was burglarized around 5 p.m. yesterday, but fortunately she was not at home. Her neighbors noticed a car parked the wrong way in the driveway and a 15-year-old boy running around the house carrying a flat-screen TV, and called the police with a description of the perpetrators and their vehicle. The suspects were caught near a Ruby Tuesday, where they reportedly held a person up with a sawed-off shotgun--during the dinner rush. Thankfully, a deputy sheriff was close by, so they were caught and Ann got most of her belongings back.

She surprised me, however, when she said that the perpetrators were probably desperate for drug money. Who robs a house in broad daylight? Who holds up a person in a crowded parking lot? She said she hoped they got help. The power of grace and forgiveness kept her sober.

As people with borderline personality disorder (BPD), we have a lot to learn from Ann.

What the Big Book says about forgiveness 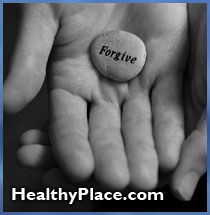 Chapter Five of the Big Book reads "This was our course: We realized that the people who wronged us were perhaps spiritually sick. Though we did not like their symptoms and the way these disturbed us, they, like ourselves, were sick too. We asked God to help us show them the same tolerance, pity, and patience that we would cheerfully grant a sick friend. When a person offended we said to ourselves, 'This is a sick man. How can I be helpful to him? God save me from being angry. Thy will be done.'"

Justice is one thing--I'm a firm believer in law and order and would like to see treatment combined with punishment. Our attitude toward the offender is another. The Big Book reads "Resentment is the 'number one' offender. It destroys more alcoholics than anything else. From it stem all forms of spiritual disease, for we have been not only mentally and physically ill, we have been spiritually sick. When the spiritual malady is overcome, we straighten out mentally and physically."

People with BPD are the same way. We're sick, and our number one killer is resentment. Resentment causes us to resort to unhealthy coping skills such as drinking, binging and purging, and self-injuring. Remove the resentment and everything else falls into place.

It works if you work it

So how do we reach a stage where we do not resent someone who wrongs us? I'm still in the process of figuring that out. But what I do know is the truth of the phrase we close our meetings with--"It works if you work it." Forgiveness and grace work only if you decide to make them work.

We have to work on our character with the help of our Higher Power. We have to ask ourselves who we are angry at and why. In most cases, it's because something we value is threatened.

An example from my life might be my laptop. Since I rely on it for work and some coping skills (such as watching an episode of "The Simpsons" online), I have a fear of my laptop being broken or all my data being lost. If one of these fears, God forbid, came to pass, I would be angry at whoever or whatever caused it. Why? Because I fear economic problems and because a good chunk of my self-esteem comes from my work. It would be hard indeed to forgive. But resentment would drive me to drink or self-injure, so I would have to forgive for the sake of my own sanity.

"It is plain that a life which includes deep resentment leads only to futility and unhappiness," the Big Book reads. "To the precise extent that we permit these, do we squander the hours that might have been worth while."

APA Reference
Oberg, B. (2013, August 20). The Power of Grace and Forgiveness, HealthyPlace. Retrieved on 2023, January 30 from https://www.healthyplace.com/blogs/borderline/2013/08/the-power-of-grace-and-forgiveness

Replacing Addiction: My Adventures With Kombucha
One Size Fits All? Not in Mental Health Treatment