One Size Fits All? Not in Mental Health Treatment

I love hearing from my readers. The other day, one wrote:

"[T]he facility here in a Central Florida receiving center puts everyone together, whether they be folks who are well in touch with reality; but are having emotional issue, or they be folks who are totally out of contact with reality. Everything is "dumbed down" (I do not like using that term, but I cannot think of one better) to those who don't know front from back, so to speak. I know there is a shortage of beds, but it would help if those of us who are aware, so to speak, would be treated as such. Sadly, for those who are not in touch, there seems to be no long-term place for them, and that is not right."

She hit the nail on the head. Mental health treatment is often treated as "one size fits all", which makes it difficult for people to get the treatment they need.

My creepy neighbors--different baselines in outpatient 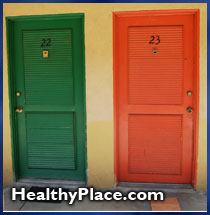 I live in an apartment complex for people with severe mental illness. Basically, too healthy for a group home and to sick for independent living. Some people here are very high-functioning. Then there are some others, such as my creepy neighbors.

One stood outside my door one time having a very loud conversation about how the Bible says masturbation is a sin only if the semen is on the ground. He's tried to come into my apartment without my permission, so I keep the door locked. I'm actually pretty creeped out by him, but there's nothing I can do since he's at a lower baseline. Another neighbor told me he thinks of me when he masturbates--way more information than I needed to know, but that's his baseline. Two neighbors have said they love me, while a third has asked why I don't have him as a boyfriend.

I feel like the healthiest patient in the cancer ward.

Just how diverse a range of baseline should there be in one facility?

My treatment team is affiliated with the hospital that gets the sickest patients outside of the state hospital. That's led to some interesting experiences in inpatient treatment. As a person with borderline personality disorder, I'm considered a severe case and am usually placed with other severe cases--regardless of functionality.

During one attempt to sober up and restore myself to sanity, I was with several other serious cases. One was convinced she was "an astronaut queen". Another often urinated on the floor and claimed to be Jesus. A third wandered around the unit screaming "Hallelujah!" It was not the healthiest of environments to recover in. Few things are scarier than suffering the symptoms of a psychological disorder with full control of your mind.

Should there be divisions between high-functioning and low-functioning patients? For the sake of everyone involved, I believe that patients should be grouped by levels of functionality. Not everyone is delusional. Not everyone dissociates. Not everyone needs the same level of treatment. One size should not fit all.

No place to go

Unfortunately for people with low functioning levels, there are not a lot of places to go. Mental health budgets have been slashed to the bare minimum. There is no money to evaluate who needs what type of treatment, and there are no beds for those who need a more structured setting. As a result, there is a one-size-fits-all approach to treatment that needs to be customized.

Everything I've read on the subject seems to indicate that Americans want better mental health treatment--until they realize higher taxes and higher premiums would pay for it. Then it's a "Well, maybe if we ignore it, it will go away." But mental health issues don't go away; they're just lumped into one group to save money. And that negatively affects treatment for people with severe mental illness.

It reminds me of what a physician I interviewed said in regards to a hospital's budget crisis--"What are we willing to pay to ensure there's an adequate safety net available?"

APA Reference
Oberg, B. (2013, August 27). One Size Fits All? Not in Mental Health Treatment, HealthyPlace. Retrieved on 2020, April 9 from https://www.healthyplace.com/blogs/borderline/2013/08/one-size-fits-all-not-in-mental-health-treatment

The Power of Grace and Forgiveness
BPD and "Best Friends" - Mourning the Loss of a Pet
Christina
September, 23 2013 at 10:24 am

I've been hospitalized multiple times and the hospital that I'm usually put in used to put us into "treatment groups" based on our functioning levels which was great, usually it was the suicidal (me) and sometimes homicidal and sometimes people who heard voices but seemed to be in control (knew they weren't real, didn't listen to them) and then they had the group that was totally out of touch with reality. If your condition got better (or worse) you could be switched.
Last time I was there they'd changed to simply grouping us into female/male groups regardless of the reasons we were there. I was always in the high functioning group as I was classified as suicidal, they don't really deal with BPD as a whole because it's a short term ward in a normal hospital. I do not like the way it's set up now. We'd really form some good relationships in these groups because we could all relate to each other.
I've never experienced things like hearing voices or having hallucinations (except when I had a severe reaction to my medication once and that's not the same thing) and many of them don't understand what BPD and/or suicidal people are feeling.
I'm hoping they change it back. Well actually I hope I don't go back to the hospital but that's probably not realistic.

Another great article from you, Becky. Imagine if we lumped all "medical" patients with brain diseases together and put them in the same hospitals and the same units, and basically the same treatments. Parkinson's disease, MS, epilepsy, migraine, dementia, traumatic brain injury -- and bipolar disorder, borderline personality disorder, schizophrenia, depression, OCD. It would make no sense and offer ineffective -- and possibly harmful -- treatment, and not "stabilize" anyone. We have brain diseases but are thought of as being separate from all other diseases, lumped together regardless of illness and of functionality.