Replacing Addiction: My Adventures With Kombucha

Addiction, whether it's to a substance such as alcohol or a behavior such as casual sex, is cunning, baffling, and powerful--and a common trait of borderline personality disorder (BPD). We need help to fight it. But some of the addiction battle is up to us. One important way to fight addiction is by replacing your addiction with a positive hobby. In my case, I have replaced my alcoholic lifestyle with the production and consumption of kombucha. 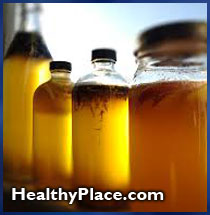 When I was drinking, my thoughts revolved around alcohol--how to get it, which alcoholic beverages to drink, how to get more money to pay for it and the actual consumption. I knew I had a problem as I often drank my grocery money or ended up in the psych ward after a week-long bender, but I didn't care. Alcohol was my life.

It became such a problem that I was sent to the dual-diagnosis unit at Richmond State Hospital in Richmond, Indiana. There I was forced to admit my drinking was out of control and that if unchecked, it would either kill me, send me to jail, or result in further hospital stays.

For four months I dried out. I attended AA meetings and group therapy. I discovered I did want to get better. But when I was discharged, I had nothing to replace my alcohol habit, which left me at a high risk of relapse. What was I supposed to do?

Then I discovered kombucha.

Kombucha is a drink made from fermented sweetened tea. Although fermented, it is not alcoholic--in fact, some people use kombucha to help them stop drinking. Kombucha is a popular probiotic beverage which may have anti-stress properties. I first tried kombucha at a farmer's market and loved it.

The problem is it goes for nearly $4 a bottle. And as a person on disability, that simply isn't affordable.

This problem was solved when I acquired a SCOBY--symbiotic culture of bacteria and yeast--which is the main ingredient in kombucha. Now I make my own--paying only for the sugar as I have an abundant supply of tea. I drink a bottle a day. I've noticed an improvement in my general health, both physical and mental, and I've noticed an increased energy level. I often experiment with different flavors and brewing methods, keeping notes on my trusty laptop. While not extremely time-consuming, it has replaced my alcoholism.

I still suffer from temptation from certain alcoholic beverages, but when my mind goes in that direction, I make myself think of kombucha. What fruits or herbs would give me a delicious kombucha? My most recent batch contained a few ginger-infused kombuchas as well as one with black raspberry juice. Which tea would be a good base--black tea, yerba mate or green tea? Before long the temptation is gone and I've got an idea for my next batch of kombucha.

My family is fond of saying the proverb "Idle hands are the devil's workshop." In addition to addiction temptation being strongest during HALT--Hungry, Angry, Lonely, Tired--boredom is also a time of strong temptation. That is why it is crucial to replace an addictive behavior with something positive.

For example, some people give up smoking by keeping a cinnamon stick in their mouths when the craving strikes. Some people with BPD who self-harm will either draw on themselves with a red pen or hold ice in the area they want to cut. Be creative! Find a positive coping skill to replace the negative coping skill! Ask your psychiatrist or your therapist for advice. Go to AA meetings and find out what other people do. Research positive coping skills on the Internet. The right one for you is out there, just waiting to be discovered.

What do you use to fight addiction? What hobbies have replaced your negative coping skills?

Leaving an Abusive Relationship
The Power of Grace and Forgiveness
J
January, 5 2020 at 8:24 pm

Hate to be a Debbie downer, but doesn't kombucha, especially homebrewed, contain some alcohol? Like a near-beer amount? Do you ever feel buzzed after having some?

It contains alcohol But only a trace amount 0.5 %. Alcohol is a poison a neurotoxin and is unhealthy in any amount, what this person did is a way better choice then continuing to kill themselves.

Loved this! You're absolutely on the right track. Replacing a destructive behavior with a constructive one is by far the best idea. Of course, as a therapist, I will also strongly urge that anyone with addictions look hard, preferably with qualified help, to find the problem that the addiction was trying to address. Mere habit change is rarely enough.
Now...I'm dedicated bread maker and yogurt maker - both can be quite healthy if done right. Could you add to your post (to facilitate readers' taking action on what you so correctly advise!) some links you recommend that will teach us how to make kombucha? I want to do this!
Finally, as I'm into nutrition big time, let me advise that tea has some distinct health benefits, because of the polyphenols in the tea. However, there are some pretty decent indications in the research that it must be consumed WITHOUT added milk - in it or your stomach, as proteins in the milk will bind with the polyphenols and block their benefit.
Thanks for this lovely post!