Bipolar Medication Will Take Away My Creativity: True or False? 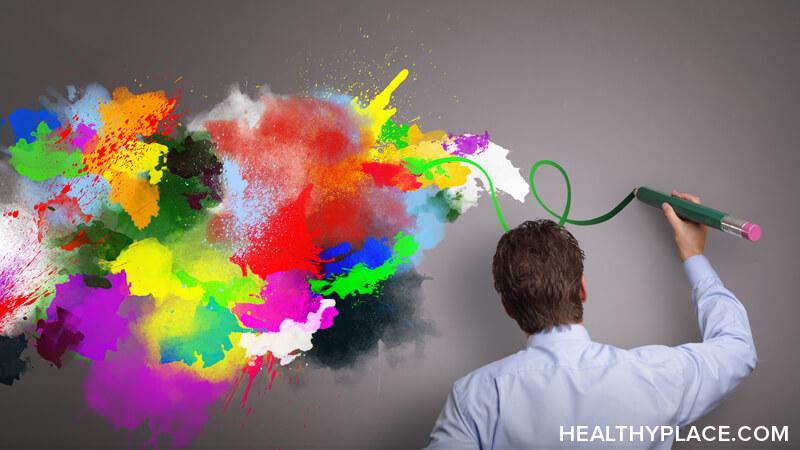 Upon being newly diagnosed with bipolar II, I saw many people online complaining that they were no longer creative after taking bipolar medication. The extreme side-effects of bipolar medication alone, such as weight gain and sedation, made me question whether or not bipolar treatment was worth it. The possible loss of my creativity…well, frankly, it scared the crap out of me. I was concerned it would affect my work in a creative career field and thus worsen my depression.

I cannot give a research-based answer to this question. I can tell you from my personal experience with bipolar medications that finding the right routine of medication enhanced my creative skills.

When I started the process of bipolar medication, I was very clear with doctors about this concern but was told that a lot of my creativity could be part of hypomania. However, I realized this was false; being that I utilized my creative side during periods of depression, hypomania and when I was stable. Writing and creating different projects are a significant part of my bipolar disorder coping skills as well. It took me a while to find the right routine of medications that would allow me to maintain my creative side while living a stable life, but it also placed more responsibility on me.

Finding Bipolar Medication That Allowed Me to Be Creative

The sedative side-effect of the bipolar medication is what made it impossible for me to thrive creatively. I was sleeping for more than 12 hours a day. I felt worthless, and like I could not contribute anything to society. I decided that enough was enough and I had to address the problem head-on with doctors. I went to my psychiatrist and worked for months trying to find the right routine of bipolar II medications that would allow me to thrive as an individual with bipolar disorder while utilizing my creative side to build a professional career. It took months to a year, but I finally found a treatment plan that worked.

Before treatment, I was unable to focus and put forth my creative ideas. I would get halfway through a project and then quit due to frustration. Today, I can complete projects that I am working on and maintain my career as a writer and creator.

When you live with bipolar disorder and are in the process of seeking treatment, you must have open communication with your doctors. I still endure many side effects of medication but it is not as severe, and I prioritize my creativity as being something I do not want to sacrifice. I have to make adjustments every once in a while, which is part of managing my treatment living with bipolar II disorder. In my experience, it is false that bipolar medication will take away your creative side but it requires work in finding the right treatment regimen to maintain your creativity.

APA Reference
Blum, H. (2018, June 19). Bipolar Medication Will Take Away My Creativity: True or False?, HealthyPlace. Retrieved on 2021, May 12 from https://www.healthyplace.com/living-with-bipolar-blog/2018/6/bipolar-medication-will-take-away-my-creativity-true-or-false

Coping with a New Bipolar II Diagnosis and What to Do Next
Bipolar Disorder and Motherhood: Should I Have a Child?
Nathan
September, 8 2019 at 10:38 pm

ABRAHAM HICKS. We would call those who are diagnosed with this Dis- order as STRONG WANTERS. We would not call it a DIS order .But the most ORDERLY THING THERE IS!!!!!!! HA! They have tried to dupe us into all believing that feeling really HAPPY is a disorder. Slap a label on it . Call it mania. Write out a script. Take a pill.keep increasing the dose. Don’t trust your own feelings anymore. Put a benchmark on how happy or sad your supposed to feel. And hand your power over to the peanut gallery.who doesn’t know your vibration, what you’ve put in the vortex, and where your going. Outsiders! Who slot everyone into groups of caterizations and bloody diagnosis. No one’s self empowered by all this Get help from professionals mentality. PEOPLE. WHETHER YOURE DOWN AND OUT, SUICIDAL, VERY HAPPY, ANGRY, SAD,, CRYING YOUR GUTS OUT, BEING NEGATIVE OR POSITIVE. DONT LET THEM CAGE YOU IN MENTAL BOXES OF ‘ delusions of grandeur....mania...bipolar...and all the other disempowering and damaging words that just make you want to give up. They go ho e...polish their Mercedes. You have lost connection with who really are and wait for your next regimented appointment time. PEOPLE... your emotions, your difficulties.... your feelings...are your built in emotional guidance system. You have it for a reason. You are not helpless or worthless or powerlesss. Your power is in your hands. Not another’s, not the peanut gallery.TRUST yourself. Your emotional scale, from rock bottom zero to high as a kite is your business and it’s not a disease. It’s not something for e erybody else to make money out of and leave you empty pocket. What ever you are feeling is telling you something.Forget the past, the people in it, what they said... And grab your life back in your own hands where it belongs. Get your personal power back! No one has the right to put a ceiling on how happy you can feel. And certainly it’s not a bloody disorder to be really happpy.what is a disorder is our society and it’s belief that the answer to everything is medication. Take back your personal power or else others will hijack it!!! And it will fund their careers and holidays. Happiness is not a disorder.Mania is a made up big pharma con. It’s like saying...don’t take your happiness above this line or you’ve got a disorder,CRAPPPPPPPP.IVE NOT SEEN ONE PERSON DIAGNOSED WITH DEPRESSION GET OVER IT BY PUTTING CHEMICAL PILLS DOWN THEIR THROATS. INCLUDING MY SELF. WERE IN THE DARK AGES. ITS EITHER SHOOT EM IN A PATSY MASSACRE OR DRUG EM! Anyone with half a brain and who’s bothered to research these so called lone nutter massacres that are becoming daily news knows that a harmless kid with an iq of bloody 60 something can’t execute lots of people like a highly skilled military sniper. But the massages are so dumbed down by the idiot box, the media and fluoridated tap water that they are no wiser than the sheep in the paddock casually munching away at grass oblivious to their impending fate. ( no offence to sheep ) Martin didn’t bloody do it. Do your research. Ask the survivors who’s only outlet to tell the truth was on the internet. The media is controlled by the really bad people so they told the story to cover up what really happened. And everyone just bought it.hook line and sinker. Because no one has time to look beyond the circus curtain. Everyone’s working their arses off. While the sinister plan unfolds. Nazi germany is repeating itself.and only those who have woken up areseeing the danger signs. It doesn’t matter how many more shootings there will be. Always a lone nutter is the fall guy. Always the police arrive way too late. At port Arthur it took the police 6 hours to arrive.A NSW premier back in 1987 said IT WOULD TAKE A MASSACRE IN TASMANIA TO IMPLEMENT GUN LAWS. Look it up! AND A 20+ mortuary truck was ordered for tas just prior to the event.then sold later. The Hobart hospital did a mass casualty training course just before it happened. It was all planned. To remove guns from the population. Why? Because there are plans ahead for us and they don’t want us in any position to defend ourselves. The terrorists are not overseas. They are running our countries. And killing their own people.Australia, Britain, USA. Leaders are war criminals. Killing millions of Afghans Iraqis sirians, indigenous people, babies. Satanic bloodlines. Really nasty pieces of work. Hollywood is a cessspit of evil. You’d better wake up everyone. Sleeping beauty time is over. The witch gave you the apple.you ate it. Now the prince is here to kiss you and say WAKE UP! Because you may be next if you don’t get your head out of the sand of everyday matrix and realise finally that we’ve all been duped.ANd....we are all on the next SCHINDLERS LIST!

I suffer from GAD combined with chronic depression and aside from an ongoling cognitive bases psycotherapy I'm also medicated with benzodiacepins and pregabalin as well as an antidepressant. I used to be very creative in various ways (painting, writing, etc, just for myself and now I just can't seem to find the motivation. Could it be the medication?