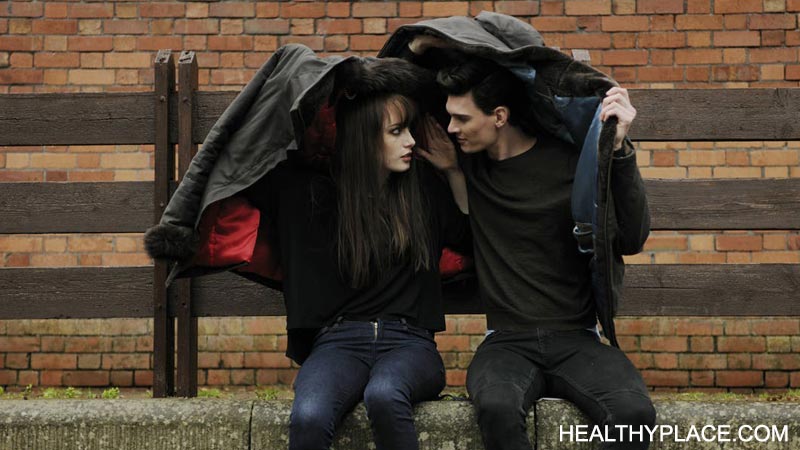 Like any relationship, bipolar relationships fail for various reasons. Two primary reasons are

When a person who lives with bipolar disorder is not seeking or getting the proper treatment, it increases the chances of a relationship failing. The highs and lows are more extreme, and it is a constant mental health battle for both people involved. This is why seeking treatment for bipolar disorder before getting romantically involved is so important.

Additionally, the stigma of bipolar disorder also contributes to many relationships failing. When people get romantically involved with someone who knows little about bipolar disorder, a high level of shame may exist. This comes from the partner making the person feel bad about their bipolar symptoms, behaviors, and just having a mental illness in general. Eventually, resentment starts to build. In a previous relationship, my diagnosis of bipolar 2 disorder was used as a platform for emotional abuse. It started out in a subtle way, but then escalated and became extreme. If a person is unwilling to accept your diagnosis of bipolar disorder, then it will eventually lead to the relationship failing.

As a mental health advocate, I have personally spoken to many people living with bipolar disorder who are in healthy marriages and romantic relationships. When I ask them what the main reason for the success of their relationship is, the answer usually involves the idea that both partners work together. They do not judge one another for their imperfections. Also, the person living with bipolar disorder is very comfortable with their partner. They feel safe and are not in constant fear of judgment. It takes time and patience, but according to the majority of the people I have met, it is worth it. What about your experience with bipolar relationships?

Is Bipolar I Worse Than Bipolar II Disorder?
Bipolar Disorder and Ghosting: It's a Big Problem
john dimas
November, 19 2019 at 6:52 am

Finally at the age of 51 I am taking the necessary steps to get help with my bipolar. I had recently started an amazing relationship with a God fearing woman!!! My first time, cus generally they are not very God fearing. Didn't take long to show my signs and shes gone. She quite possibly could have been the one that understood me, but I wouldn't open up about things. I owe it to me to get help, so if this ever happens again I will be ready to meet the challenges!!!

I have never been in a relationship with someone with the Bipolar illness and it gets frustrating at times. Maybe I’m
The cause of some of it because I don’t know all about the illness. Trust issues are not a problem but lack of communication is the main problem and again maybe that has something to do with me. I need help. I love her and truly want a life with her.

I need some help and advice I think IV fallen in love with someone that is bipolar and they have cut off all communication with me I'm not sure what to do they said they felt overwhelmed and thought about me all the time and had quit sleeping and felt they weren't giving me what I needed out of the relationship I need some advice pls help this person means so much to me.

My wife and I both have bipolar. That's considered to be impossible by some people. We've been married for 12 years now with no signs of trouble. I think that we understand each other better than someone without bipolar could.

neverist
Not everyone does this, it actually further perpetuates the stigma to say that people with Bipolar disorder ghost people, people shouldn't use their diagnosis to excuse themselves for being a coward.

I have never ghosted anyone and wouldn't want someone to do that to me,
the idea that were are slaves to our moods is as much a fallacy as it is for other people.

None of us have a choice over our moods we do however choose how we treat people and it's honestly a little saddening to hear the amount of people either using this as an excuse for their own bad behaviour or others using their diagnosis as a way to understand it.
Bipolar Disorder and Ghosting: It's a Big Problem
Susan Smith
I too have Bipolar Disorder and I am an extreme empath. Your story I can totally relate to. I have always been able to sense danger especially. I have excellent instincts. I don't watch the news because it breaks my heart!! Crowed places overwhelme me severely. As of two days ago a 15 month old Eveyln Boswell of Tennessee was reported missing and hasn't been seen since December 26th, 2019. Abused, missing, ect. children always have a profound emotional affect on me, especially because it took two monthsfirvher to REPORTED missing. . But this one is the worst sense of danger I've ever felt with a missing child. I can sense others pain and have physically felt the pain from people I'm the closest to. It's almost like a sixth sense. But a few extremely close relatives have fooled me because of how much I love them. My Dad is a psychopath, my sister a sociopath and my cousin and best friend has Narsacisstic Personality Disorder; all on my Dad's side of the family. Yet had it been a stranger, I would have immediately picked up on the betrayal, gaslighting, deception and abuse. To my knowledge I've yet to meet a another empath and it's hard for family and friend's to understand how I sense what I do that they've seen come to pass. For me being an empath and having Bipolar is so difficult for me. The pain I feel with my depression and the pain from others is unbearable at times. I so much wish that there was another empath that I could text with about how we feel. Please , if there's anyone here that would be willing to help me and I help you, please let me know.
Susan
Bipolar Disorder and Extreme Empathy
Ashley
I have been seeing my boyfriend since July of 2019 so for about 7 to 8 months now and he informed me he has bipolar on our second date. I accepted him anyway because I didnt care (I have a friend who is bipolar so I was familiar with the mental health issue but only on a friend level) during our first 2 months together he went through a hypomanic episode and he allowed me to support him throughout the episode. In December the week of Christmas I was staying over and he asked if we can do it another time because he was going through something so I gave him space even though I was angry because he did this while I was at work at my job . The week of new years he finally spoke to me and let me know he was diagnosed with clinical depression on top of his bipolar and would be MIA for about 2 months. I told him that was fine just so long as he keeps me informed he agreed but that was the last time i saw him. Despite me texting and calling a few days apart maybe about once a week he has only responded once which was January 14th and it was literally just one message (my birthday was the 13th he informed me he didnt forget about my birthday and hes sorry I have to deal with this) I told him idc about my birthday i just wanted to know he was ok. He didn't respond we havent spoken since and hes blocked my number. So idk what to do or if he even wants to be with me. Its driving me insane at this point.
Bipolar Disorder and Ghosting: It's a Big Problem
Candice
This is identical to my story.
Your story resonates so much with me. Seriously, it's like reading my past.
Bipolar Disorder and Ghosting: It's a Big Problem
Catwoman
Hi Hannah. Thanks for an inspiring article. I'm a blogger for BPHope.com and also have an article published in the Summer, 2019 issue of the magazine, titled Taking On The Bipolar Depression Bully. I'm beginning the process of becoming a mental health advocate. Keep up the great work n thanks again!
How Publicly Disclosing Bipolar 2 Affected My Dating Life