Bipolar Disorder and Motherhood: Should I Have a Child? 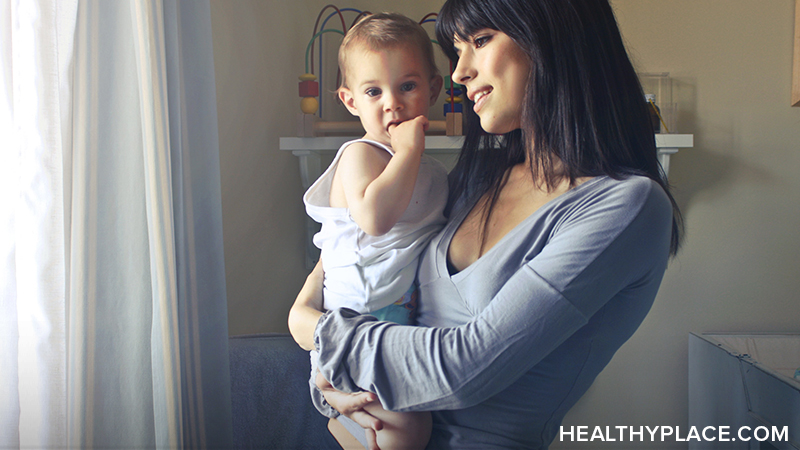 Bipolar and Motherhood: The Concerns About Having a Child

Parenthood is a challenge regardless of mental illness. However, living with a mood disorder and a severely stigmatized condition, makes the problem of motherhood all the more challenging. As someone with bipolar disorder, the concerns about becoming a mother includes:

Although I am aware of these concerns, I have never questioned becoming a mother in the future. Children have always been a part of my life. I am the aunt of eight and was a nanny for seven years. However, when I came forward with my diagnosis of bipolar 2 disorder, I began to see the controversy behind motherhood when you live with a mental illness.

Living in an environment that continually emphasizes what I am incapable of is frustrating and exhausting; especially in regards to becoming a parent which is such a unique part of our journey in life. However, I am not naive to the problems that may come with motherhood. My grandmother lived with bipolar disorder and did not receive treatment. She was a vibrant woman but as the years rolled by she was in and out of her children's lives. At the end of her life, she was alone and labeled as an inadequate mother. Although she was untreated, I was nervous that eventually I would end up in the same boat at some point. The stories of women with bipolar who ended up being terrible mothers rang louder than the positive stories. I had to trust myself and focus on the stories of promise and hope when making such an important decision.

Should I Have a Child as Someone with Bipolar Disorder?

Everyone is entitled to have their own opinion, and I admire women with bipolar disorder who choose not to have a child. If someone feels as though it is for the benefit of themselves and a child, then it is a selfless decision. In my personal life, learning about my diagnosis of bipolar 2 disorder as both a patient and advocate has confirmed my decision to have a child in the future.

There are many stories about mothers being incapable of raising children due to a bipolar diagnosis, but there are many stories of great mothers who live with bipolar disorder as well. I will not sacrifice my dream of becoming a mother in the future just because I wear a stigmatized label that says otherwise. It has been inspiring to see other female advocates share their expertise both as mothers and individuals living with bipolar disorder. I will do my best to raise my children with an open mind, a kind heart and give them the opportunities they deserve. I will not be a perfect mother, and I cannot provide my children with a cookie cutter life, but that does not mean that I am an inadequate mother. They will face challenges, and so will I, but I can give them a gift as well as the power to overcome challenges in the future.

If I allow society to dictate all of my decisions, then it will be impossible for me to live the life I deserve. We all have our internal battles, and we can teach our children how to overcome these obstacles. I have the right to become a mother regardless of my diagnosis of bipolar disorder, and I will move forward with it in the future excited and enthusiastic about the gift of a child.

APA Reference
Blum, H. (2018, July 16). Bipolar Disorder and Motherhood: Should I Have a Child?, HealthyPlace. Retrieved on 2022, May 20 from https://www.healthyplace.com/living-with-bipolar-blog/2018/7/bipolar-disorder-and-motherhood-should-i-have-a-child

Bipolar Medication Will Take Away My Creativity: True or False?
Coping with a Bipolar Depressive Episode

JP
I was on the same situation.I’m a widower and vulnerable.I met a guy online that I thought it was perfect for me my best friend and a soulmate.But after a a couple of weeks dating I noticed something wrong him.He decided to take medications and the side effects just killing him.Until to the point that he blamed me for how he feels.He didn’t take responsible for his own actions.He became very cold to me,not answering my text messages, and phone calls.And screaming at me and very abusive.He want space he felts he was suffocated with our relationship.That hurts me!As I was so attached to him we talked 3 times a day and texting constantly for 2 months.But then every morning he would send a text “good morning hope you have a great day”.And the 3 days later asked if he can call.I was hurt and don’t wanna talk.A week later I decided to talked to him.He told me all the excuses why it’s hard for the relationship to continue.It’s sounds he breaking up with but don’t want me to go either.So I was confused and decided to end the relationship at that night.And then a week later his calling me again from a different phone number because I blocked everywhere.He doesn’t stop calling and texting.And it’s like nothing happened.One day I answered him he wanna talk about what’s going on in his life and mine.It’s a friendly talked.That’s it!Im happy that I got out that toxic relationship.I got back my life and happy again.
Bipolar Disorder and Ghosting: It's a Big Problem
Ashleigh
This sounds so much like my current situation with my boyfriend. It’s like a cycle. Every few months he pulls away and won’t explain anything or talk to me. I struggle with anxiety and depression so when he does this I usually blame myself. Then I’ll keep texting and calling because I’m so hurt that he’s treating me this way and then he’ll end up blocking me. It’s so exhausting because he always manages to find a way to blame me even though he’s the one who pulled away. He hasn’t officially been diagnosed but his mom is bipolar and she thinks he could be too. I’m just so tired and I wish I was better about giving him space, but it’s hard to do when you’ve been with someone for years and they just refuse to communicate with you.
Bipolar Disorder and Ghosting: It's a Big Problem
Also Sad
I'm right there with you. I don't have any advice and am struggling myself, but you're not alone if that helps at all. The suddenness is still jarring after being told you're their person and that they still love you. The not being able to help them while you can see their struggling hurts.
Bipolar Disorder and Ghosting: It's a Big Problem
Sad
I know this article is a little older but I just found it. My boyfriend of 3 years (off and on) ghosted me for 12 days until I just heard from him. He broke up with me last spring (2021) due to being confused on what he wanted. 3 months later after some therapy (which he was opposed to) he reached out and said he wanted to try again and was working on himself. We did couples counseling to work on our communication style differences but that stopped and his individual therapy stopped in Dec. He's never been on medication or officially diagnosed but 2 weeks ago he broke down saying he hated living in Colorado, he needed to move back to be closer to his kids and he isn't sure what he wants anymore. He said he needed to process and then NOTHING for 2 weeks. I didn't reach out as I didn't want to push him further away, but was checking with his friend to make sure he was ok. Long story short, he sent me a cryptic email with thoughts all over the place this weekend and then we met in person to talk. He said he doesn't have the mental ability to give to a relationship (me) and loved me but was sorry. He said he is going to get help. I'm so broken and sad because I want to be there to help him, seeing my best friend struggle is so hard. :( I know I have to let him heal and move on with my life--it's just really hard after having gone through a divorce and then finally found someone I wanted to spend my life with.
Bipolar Disorder and Ghosting: It's a Big Problem
KlM
I can forgive you for being sick, but I can't forgive you ignoring it and ruining lives to make yourself a little easier. You haven't been remotely fair, you've been cruel in ways ill never understand, and wouldn't want to. I'm done hurting, you have to live with it now, I've suffered enough for 1 lifetime, it's my turn to be free.
Bipolar Disorder and Ghosting: It's a Big Problem
advertisement