Recently I became very depressed for no apparent reason. My therapist and I decided I needed to be evaluated, and that's when the nightmare started.

I was taken to the emergency room, evaluated, diagnosed with suicidal ideation, and sent home because there were no beds available.

When adequate is an improvement

There are stories similar to mine which have ended a lot less happily. One man suffering from a manic episode was shot and killed by a SWAT team when he wouldn't stop running--his family had called for help, but CIU never called back (which has happened to me). A few years ago, within a six-week period, two people with severe mental illness shot and killed police officers. One's family had tried to get him emergency treatment, but he vanished after being told no beds were available.

The media began to investigate how these tragic events could have been prevented. WISH-TV reported “All of the hospitals that used to admit patients with a psychiatric emergency in Marion County are closed. All of the private hospitals have closed their beds. … For all of Marion County, there are just seven beds available for acute or emergency psychiatric care for the indigent.”

Seven beds for poor people with a psychiatric crisis in all of Marion County/Indianapolis, the 12th largest city in the country. Maybe it's misleading to call this piece a call for better treatment. Adequate treatment would be an improvement. 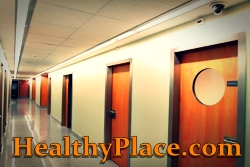 Once upon a time, hospitals worked to cure the sick. This was not a business, but a ministry, hence the religious names of so many hospitals. Hospitals were considered charitable, not businesses. But then it was discovered that people would pay for improved health. So hospitals slowly became businesses. Health care became less about health and care and more about the bottom line.

Psychiatric care, whether inpatient or outpatient, is not profitable. The medicines alone can quickly run into the hundreds or thousands per month. When you add doctor's visits, nursing supervision, therapy, etc., it can quickly total $10,000 per month for an inpatient stay--and that's on the low end of the spectrum.

Profit, however, is not always morally right. This is especially true in the case of charity. The primary focus should be to meet the mission--because if the mission is being accomplished, there will be more than enough support to ensure it continues to be successful.

Former U.S. Surgeon General David Satcher wrote "Another manifestation of stigma is reflected in the public's reluctance to pay for mental health services. ... While the public generally appears to support paying for treatment, its support diminishes upon the realization that higher taxes or premiums would be necessary."

The result is that available treatment for those in need is not a priority.

According to Philadelphia's Friends Hospital:

In other words, there's a lot more of us in this boat than many realize.

As it is, according to Friends Hospital, only one in five people suffering from a mental illness seeks help--the least we as a society can do is to make such help available and easily accessible.

I just wanted to share a general overview of my mental health treatment over the years.
* I found the most benefit from establishing a good longstanding relationship with my psychiatrist + therapist
*inpatient care (covered by insurance) should almost be considered malpractice in 99% of the cases. A day in inpatient care consists of: medication prescribed after 5 minutes of conversation with someone who does not know you at all, group therapy only, and generally being treated not as people with an illness, but as annoyances.
*most people including myself tell the doctors whatever they can to be discharged. The most common thing you will hear as a patient is "I want to go home!", followed by the patient crying hysterically while the staff could care less. When I was laying in the bed assigned to me, a woman came in and told me that I was a coward for attempting suicide. Soon after a heroin addict was given a bed next to me. He vommitted and had diarrhea all day. I demanded a new room only to be looked at like it was such a difficult task.
It has taken me years to find a great psychiatrist who actually has a conscience. A few examples of more unfortunate incidents
*prescribed 5 medications in a 15 minute introductory session
*One psychiatrist forgot my name on numerous occasions
*In a moment of despair i checked myself into a crisis center. In a later appointment the psychiatrist asked me "are you the guy who went to the crisis center?"
*One doctor in the crisis center diagnosed me with schizo affective disorder in less than 30 seconds while never actually looking me in the eye. He also was at least 80 years old.
I could go on for days, but the point is, people with mental illness for the most part are treated like animals. I am blessed now, but went through years of unnecessary chaos, just to find someone who was worthy of the title on their door.

Well said. I had a psychiatrist who I firmly believe should not have been practicing for reasons you described (he'd forget my chart, never learned my name, was a convicted felon for Medicaid fraud--and I was a Medicaid patient). He was notorious for changing our meds without telling us, which made me sick.
I'm sorry you've had bad experiences, but sadly what you've described can be reality for many people with BPD or any other chronic mental illness.
Thanks for sharing.

Mental health treatment is complex approaching that include medical and psychosocial interventions. Otherwise, psychiatric treatment would be deficient and temporary as well. Shortly every psychiatric patient should moderate its conduct through dealing with common life circumstances, in order to be satisfied with mental health treatment. The same issue seeks a simultaneous medical and professional psychosocial therapy, that include many experts, whose task must be in co-ordinate basis. As this complex treatment costs much money, it is difficult to realize this hopeful target, in the time where money evaluate every labor. In other side of reality, yet exists many prejudices and stigma toward mental health service among public opinion, that also diminish an efficient mental health treatment. By me, it ought to improve these great failure of complication psychiatric treatment to achieve an optimal mental state in community. Consequently, it would decrease the frequency of mentally ill patient, that actually, as You said, is very high.