Borderline personality disorder (BPD) is one of the few mental illnesses that can leave visible physical scars. One of the symptoms of BPD is self-injury, or SI for short. SI is so closely identified with BPD that some psychiatrists will diagnose a person with BPD if only SI is present (technically at least four other criteria should exist, but I'm going by experience).

SI is a negative coping skill. In the words of the late Lady Diana Spencer, "You have so much pain inside yourself that you try and hurt yourself on the outside because you want help."

SI: What it is and why

I first began self-injuring in college, after I witnessed an assault. My younger brother was the victim. I blamed myself for being unable to stop it. My "logic" was that if I wasn't afraid of pain, I could override my fear and take action. I could protect those close to me, and it would never happen again.

The problem was I quickly began self-injuring for other reasons: to punish myself for some perceived failure, to deal with rage, to tell people I couldn't cope with what my life had become. I needed it and was engaging in it almost nightly. This did not sit well with the campus psychologist, the campus police, or the dean (yes, my psych records made it to his office since I was "creating a disruption"). Church leaders told me I needed to repent of my sin; there was even a prayer "for eating disorders and cutting on yourself". Although my self-injurious behavior began as an attempt to maintain control, I was never more out of control in my life.

The stigma of SI 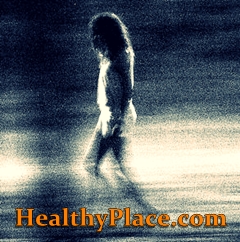 Unfortunately, SI is often misunderstood as attention-seeking behavior. That's not to say that some people don't use it for attention; just that they're the minority--I think I've known two people who might have fit that category, and both had problems other than BPD (one got kicked out of the program for possession of crystal meth, the other for frequent violent behavior). Sadly, this stigmatizing false belief exists even in the mental health profession.

When I was at Richmond State Hospital in Richmond, Indiana, I became suicidal. I told staff I was considering killing myself, even showing my therapist the note I was writing. Other patients told staff I was talking about suicide; one said 'I have training in suicide prevention and you need to help her." My mother 90 miles away even called the unit and told them I was suicidal. But because of my BPD diagnosis, it was decided I was trying to get attention. The "treatment" was to ignore me--at least until I surprised staff by making the attempt.

On the BPD unit at Larue D. Carter Memorial Hospital in Indianapolis, the staff had better training. All threats were taken seriously, and staff would do what they could to calm down a patient in crisis. That's not to say incidents didn't happen. They just became fewer as we developed skills to cope with the emotions or dissociation. There wasn't a stigma to self-harm there; it was understood that we were trying to find a way to cope with the pain we were in. As a result, we could talk openly about it without fear of staff writing it off.

Can you recover from SI?

SI can become an addiction. Like any addiction, recovery is possible--but we often confuse recovering with complete recovery. I've been out of the state hospital for two years now, and I still have to keep an eye on my symptoms to try and avoid relapsing into self-injurious behavior. Sometimes I can deal with the problems at hand without resorting to cutting or burning; sometimes I can't. I have a safety plan in place in case the latter happens. In this way, I am recovering from SI, but not completely recovered.

SI doesn't have to be a way of life. There is help available, even if you have to climb Mt. Everest to get it. You will eventually find someone who understands and can help you recover. You don't have to hurt yourself. You don't have to have your efforts at control actually controlling you.

I SI and what you said is right on. My most recent SI was two days ago because my whole family wnt to a baptism and my anxiety kept me home. I also have bipolar which leads me to SI when I'm depressed. I also feel that I am addicted to it. I did have about 6 years of no SI then it started up again like I never stopped. My husband ignores my SI now because he thinks I am seeking attention. I am crying out for help. I just started with a new therapist so hopefully she can help me deal with these issues as well as other ones. I feel no pain when I SI, physical pain. I don't feel like I'm doing it for attention because I only tell my husband and that's only some of the time.
Michele

I'm sorry to hear that you SI. It's hard to give up. Try talking to a therapist with training in helping BPD--even therapists who don't understand BPD can say hurtful things.
I'm sorry to hear your husband thinks you're trying to get attention. I wish I knew what to say. Maybe try bringing him to a session and explaining it?