BPD and Impulsivity: "I Wanted to See What Would Happen"

One of the symptoms of borderline personality disorder is difficulty controlling impulses. Needless to say, this can sometimes lead to disastrous consequences for actions that make sense only to us. Last night, for example, as I looked out my second-story window, I saw a dumpster full of construction debris and felt an inexplicable urge to jump just to see what would happen.

Thankfully I didn't, but impulsive, potentially self-damaging behavior can be a problem for people with borderline personality disorder.

"I wanted to see what would happen" 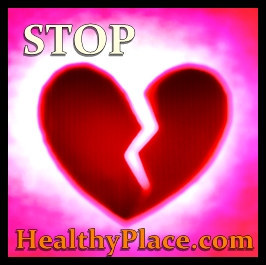 This explanation dates back to at least Ancient Greece. In Homer's Odyssey, the hero Odysseus visits a mysterious cave. His men sense trouble and urge him to flee. Odysseus, however, orders them to stay in order to see what will happen when the resident--a cyclops named Polyphemus--gets home. This ends tragically for the men, as Polyphemus eats several of them and curses the rest to be killed before returning home.

It's still around today. When I was at LaRue D. Carter Memorial Hospital, one of the patients dialed 911. When caught and confronted, she said "I wanted to see what would happen."

The strange thing is, even if we know what will happen, we might still go through with whatever bad idea is currently in our heads. This leads to another explanation for impulsive self-destructive behavior: "It made sense at the time."

"It made sense at the time"

In the summer of 2000, I was hospitalized after attempting to set myself on fire. I was taken to the ER by police, where I was briefly evaluated by a doctor as the police filled out the paperwork to have me involuntarily admitted. I tried to explain that I was fine, that I had snapped out of it, but there was still no explanation for why I would do something so "crazy', as the psychiatrist put it. All I could come up with was "It made sense at the time."

You may be the same way. Whether it's substance abuse, promiscuity, binge and purge eating, self-injury, or reckless driving, you may have a self-destructive habit you use to cope with your symptoms. It may make perfect sense to you--but that doesn't change the fact that it could end badly. It doesn't change the fact that you're risking your health and possibly your life.

You can fight back against self-destructive impulses. Ask yourself "Is this worth it?"

Is it worth a trip to the emergency room for your injuries?

Is it worth being arrested for?

Is it worth a psychiatric hospitalization?

Is it worth being placed in restraints?

Is it worth losing fill-in-the-blank?[my job, my friends, my apartment, etc.]

Stop. Take a few deep breaths. Try to look at the situation rationally. Is what you are about to do worth the potential consequences? Talk about it with your doctor or therapist. Most of the time you'll find that it isn't worth the consequences, and that the bad ideas you currently have are only temporary.

If you think it's worth it, try to stall for time. You can always engage in the behavior later, after talking with your doctor or therapist. You can't, however, undo the action once it's completed.

If it's not worth it, then don't do it. Talk to your doctor or therapist about the feelings and work through them.

Remember, you have only this one chance at life. Don't throw it away for something irrational, no matter how attractive it seems.

Keep It Real: BPD Recovery Does Not Depend on Feelings
A Call For Better Mental Health Treatment
Mary
July, 16 2015 at 3:10 pm

That sounds exactly like me! Some days I feel like running head on into a tree or jumping off the bridge or overdosing for absolutely no reason! Its so strange. Yet its fun, adrenaline rush I guess. I'm glad to hear its not just me. I never knew it was part of bpd

does anyone ever fully recover from borderline personality disorder?

I think it's like alcoholism--there is recovering, but no full recovery. People can get to the point where they no longer meet the criteria for BPD--if I recall correctly that usually happens in the patient's 40s--but I think it's something we always have to keep under control.