After Leaving Abuse: Memories of The Fantasy Relationship

When I left my marriage, I severely mourned the death of my relationship. My mourning for the fantasy relationship was as real as any grief I've ever felt. The grief was so real it led me to delude myself about the truth of my abusive marriage. Will, my husband, wasn't all bad, was he? Maybe our separation would scare him straight, maybe our recent civil conversations heralded a new beginning for us, maybe this was all a bad dream. These thoughts of hope led me down a fanciful path of wishful thinking. Before too long, I found myself in "Willy-Land" - the magical fantasy place where all was right in our marriage because Will said so. I imagined our relationship filled with roses and sugar, more good than bad, more love than hate. I thought that just maybe I had imagined everything! I put on my rose-colored glasses and remembered our wedding day, our sons' births, and family celebrations with bittersweet angst.

He said that he wouldn't function without me, could never love anyone else ever again, and that I was perfect and irreplaceable. He seemed larger than life and I thought he loved me more than anyone ever could. He needed me and I needed him and true love conquered all pain. I carried those loving feelings and applied them to him during conversations we were having in the present. I believed he was loving and kind and that we would work "this" out. 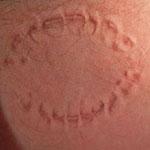 And then my fantasy bit me on the butt.

Will used my fantasy against me. He asked to meet and discuss custody issues. I heard "meet and discuss us". I became excited about seeing Will, and hoped that our meeting signaled the end of our separation. I built it up to Gone With The Wind proportions.

It wasn't what I'd imagined. This time, I'd gone to Willy-Land on my own because I wanted to believe the delusion that Will loved me. The meeting turned nasty almost right away and the pain of "failure" struck me a hundred-fold.

After that meeting, I continued to grieve for the fantasy relationship, but now I recognized it properly. My wishes and desires for a loving relationship with Will would never come true. Willy-Land was an illusion, a false promise of happiness. I mourned a relationship I would never hold, much like I mourned my miscarried babies of years past.

Over time, the mourning and sadness ended, but time wasn't the only thing I needed!

I needed to get past the sadness sooner than time would allow because I had to face Will in court and when we passed the children between his place and mine. I needed to be better NOW, and if I couldn't truly be "better" then I needed to pretend I was so he wouldn't know how weak I felt inside. If he knew how weak I felt, he would use it to his advantage.

Fake It 'Til You Make It

I decided that no matter how I felt inside, I would project an image of confidence and happiness when we talked on the phone or met up with one another. To do this, I watched confident women on television (Angelina Jolie has this all wrapped up!) and read books about abuse for hints of what life without abuse was like.

Then I copied what I saw and read.

In the beginning I would break down in tears and fear as soon as I was alone. Now I don't have to fake it anymore. "Faking it" made me understand that he never knew what went on inside my mind. Back in the day, I thought he could read my mind, but he was only reading my actions and interpreting them well. Faking helped dispel his illusion of control and my fears.

Purposefully Push Out The Fantasy

Toward the end of my marriage I was an expert in recognizing his abusive tactics. Recognizing it in him helped me to see when I started to abuse myself with irrational fantasies. When I felt myself heading to Willy-Land, that place of fantasy and wish-it-were, I would forcefully change my thinking.

When I noticed myself drifting, I told myself "Stop It!" and surprisingly, the same thing I once said to him helped me! After stopping the wrong thinking, I replaced it with something better or went to do something else.

Some people say to make a list of all the hateful things you can remember and read the list when you consider returning to your abuser. I don't like that idea because it tends to re-traumatize us to remember the horrid stuff. Traumatized people do not successfully fake it 'til they make it OR push fantasies from their mind.

So, I replaced the old fantasy with a new one. I wrote a list of qualities I was looking for in a person. At first, the only thing that came to mind was "He never hits me!" After getting the abusive crap out of the way, I found myself writing stuff like, "He loves to talk to me during dinner and sometimes we sit for hours talking about our dreams for the future."

When the old fantasy threatened to carry me away, I pulled out my new list, read it and felt it until it became stronger than any abusive fantasy relationship I could imagine.

"Faking it" and my new fantasy helped strengthen one another. Eventually I was strong, happy, and confident. And, believe it or not, I also eventually met someone who embodies every characteristic I wished for.

APA Reference
Jo, K. (2012, September 3). After Leaving Abuse: Memories of The Fantasy Relationship, HealthyPlace. Retrieved on 2022, May 24 from https://www.healthyplace.com/blogs/verbalabuseinrelationships/2012/09/memories-of-fantasy-relationship

You Can’t Stop Verbal Abuse With More Words--Use Action
Do the Effects of Abuse Change You Permanently?
Stef
October, 16 2020 at 11:33 pm

Thankyou I needed this so much!

Thank you for your proactive and helpful insights and suggestions. You have helped me by courageously writing about your own experience.

Hi CJ: I'm so glad that you have found these articles helpful. Please try to stay strong! -Kristen

I left five months ago and this fantasy life thing was a real problem for me. All along I was convinced he would change, so I was very experienced in creating the dreams of what could be for us. Putting an end to that was extremely challenging. I still do it, but I snap myself out of it quicker.
I also made a list of the bad. I found it helpful. I was in denial for so long. I needed to acknowledge what happened so I could heal. And healing meant letting go of the fantasy.
So for me, that list helped me move forward, not back.

Youre completely right. A list of bad things is re-traumatizing. I love the new fantasy idea because I am struggling with the old fantasy. Remembering the bad things just brings up anger and pain. Totally gonna try it thank you so much!

Bravo on an excellent job. I work with DV and also a survivor of family DV when a preteen. The other risk is finding another abuser who is not "as bad" so you think you can deal with it. Don't ever "settle" for abuse!

Excellent article. It took me years to be able to do this after leaving an abusive relationship. You are a powerful woman! Good for you!

Amazing! I feel like this one was written for me, and I thought no one understood. I've been in my fantasy "Wayne's World" and I love your tips for dealing with that. I had a list of all the horrible things he did but I never want to read it because, like you said, it is re-traumatizing.
Thank you.
- V

I guess I might consider that at this point in time. Thanks so much!

@ Randomly K: My observation if my life and others' points that the pattern keeps occurring in our life i.e. we continue to attract abusers until we learn to love ourselves. First, we need to love ourselves, respect ourselves and believe that we are worthy of good things. The abuser (the first one) breaks our confidence so much and at times when we meet the second guy, we lean on him or rely on him to run away from the past..And the patterns continues.
@ Kelly! You always say things that are so similar to events that had happened with me. I live in fantasy land these days! I keep thinking that the marriage could have worked. I hope he calls me (My urge to contact him is zero!). The divorce case is in the court and he does not even care to turn up! I am working now but weekends fill me up with the thoughts of my fantasy land and replacing them doesn't help :(

A wife who is abused, can you go to therapy or see a counselor? There is a lot we can do on our own, but when you have uncontrollable memories/flashbacks then it is time to receive professional support.

Ugh. I'm going through this very thing right now..for a second time. This second relationship has me feeling more messed up than my marriage. I trying hard to not let myself get sucked back in. :-/

Kellie,
I'm so glad I found your site. Reading your words takes me back to some very painful memories with my abuser.The worst thing for me was when I finally realized that he never really loved me. He didn't know how to love. My son had to get me away from him at gunpoint. Now, I'm also trying to warn other women.
Blessings,
Wanda