While it’s something that many people don’t want to talk about, sex matters to people. Sexual function and sexual desire can be important parts of a person’s life, particularly if he or she is in a relationship. And, unfortunately, what we know is that combat posttraumatic stress disorder (PTSD) affects a veteran’s sexual desire and sexual function in negative ways. In fact, some studies have showed such a correlation between sexual dysfunction and PTSD that some have proposed making it an official, diagnostic criteria.

Sexual desire, is, of course, one’s desire for sexual relations and whether one has a partner or not, this can be important. In a 2014 study, Problems in Sexual Functioning among Male OEF/OIF Veterans Seeking Treatment for Posttraumatic Stress, 63% of male veterans in the study reported sexual desire problems. Of those with partners, 72% reported a lack of sexual desire. According to the study, white race, combat exposure, social support, and avoidance/numbing symptoms predicted a lack of sexual desire. The 2008 study Sexual Functioning in War Veterans with Posttraumatic Stress Disorder, found that veterans with PTSD had significantly reduced sexual activity including sexual fantasies, foreplay, oral sex, and intercourse, in the previous month. Veterans cited their own health problems as the reason for reduced sexual activity.

It’s not clear why veterans with combat PTSD experience a loss in sexual desire but I suspect the above study may have hit on one main reason: the PTSD symptoms of avoidance/numbing. These symptoms often produce a lack of emotional intimacy in relationships and it only stands to reason that sexual intimacy would also be reduced. 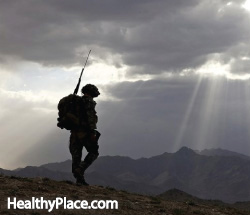 Several studies have focused on physical, sexual dysfunction in combat PTSD veterans. In Problems in Sexual Functioning among Male OEF/OIF Veterans Seeking Treatment for Posttraumatic Stress, an official erectile dysfunction diagnosis was present in 12% of male combat veterans while sexual arousal problems were present in 62% of partnered veterans.

How to Improve Sexual Desire and Functioning in Combat PTSD

Medication can address some sexual dysfunction issues and if the sexual function or arousal is being impacted due to a PTSD medication, a change in medication can often solve the problem. Many choices of medication exist so, in general, veterans should not have to live with this side effect.

Additionally, there is research that suggests that treating the underlying combat PTSD will correct the problems in sexual desire and function. This makes perfect sense. As other PTSD symptoms lessen, so do these ones.

Psychotherapy for combat PTSD is also often helpful in addressing these types of issues.

However, none of this help can be employed if the combat veteran is not open about what is happening for him or her so my biggest piece of advice for veterans experiencing reduced sexual desire or functioning is to be open with his or her healthcare provider so that you can look for a solution together. And remember: this, too, can be a symptom of combat PTSD and is not your fault.

Fighting the Stigma Against Veterans with Combat PTSD
PTSD Rates in Veterans High, But Not in All Groups
Cher
January, 24 2019 at 12:01 pm

I'm a partner of a man who has childhood trauma post-traumatic stress syndrome we've been living together although we've known each other for many years for about a year Christmas and Shelly after the honeymoon phase just died and John Levi's know what happened basically but he can't I can't talk about me he can't talk about these to me it was so traumatic that then we just talk a lot of other issues and he has a penal pump and he has one testicle from Childhood Cancer and but you know we were fine we were great and happy and I had not had sex since 1987 and I didn't want it I have a lot of female a very painful issues. Just have not seen anyone with as much pain as me and we've got a lot of work to do and we were happily going along that path I was going to start. I don't know if you've heard of it but it is therapy for women pelvic floor therapy and then they use these devices to widen you or you know and I don't know but I feel suicidal I feel horrible I feel terrible I don't know how to handle this I don't know enough about it I'm reading all I can I just feel like I need help so bad and no one can help me make appointment with a psychologist and I just feel it's him I need to talk to you when I can he goes ballistic oh my God ballistic ballistic out of control it's so hard for me he's a victim but I'm also a victim I believe I've got secondary post-traumatic stress syndrome and I already know that I have post-traumatic stress syndrome abandonment issues which he made me realize that before birth have to go G

I am a combat veteran and prior to war I was okay sex drive, but now I have been back the desire is less and less, been married 18 years and my partner is growing quite tired of it,

I have PTSD from sexual assaults. It's been 4 yrs with a councilor to get back to normal. During that time I too had no sexual feelings for anyone. I didn't want to be touched, I didn't want anyone in my home I had no trust in anyone. PTSD is a trama to the brain and body. It never goes away. To many triggers. Maybe start off with a support group of Vets with the same issues. He needs to talk about it. Keep talking about it. It's nothing to be ashamed of. Hope he can find some help. My first sexuall assault I was 8 yrs old. I didn't know I had PTSD until 35 YRS later. In my mind I thought this was normal. The first trama you shut down. Like a shield goes up around you. You can't let anyone in because you don't want to through that anymore

I am a disabled veteran of OIF 2,3,begin of 4 (spend 18 months in country. Also had a deployment in 2008-2009 Kuwait. I was just told by a medical doctor that i show 4 of the six signs of Combat PTSD. I've know have seen the doctor a few more time. Before i went to iraq i could not get enough sex. Now that i am back it is the farthest thing in my mind. I got married and divorce between the 2 deployments. I am onve again married since sept. 2015. My sexual drive is less and less. Can i do anything that would help be get that desire back?

Im an OIF veteran diagnosed with PTSD. I had a high sex drive before OIF, after OIF and a PTSD diagnosis my sex drive has gone through the roof. Its like I can not get enough. To top it off my wifes libido is low due to high testosteron, so that mkes it worse for me. Is it normal to experience a higher sex drive with combat related PTSD?

My husband was a very sexual man prior to being on AFG. Upon returning, he isn't interested in me except on occasion. Touching is almost non existent. We have been married 30 years but I'm feeling hurt and rejected! I don't know how to handle this as he tells me that it is me changing!!!! I have no idea how to handle this as he doesn't truly admit to the ptsd??
Any ideas??