This blog is specifically geared toward combat-related posttraumatic stress disorder (PTSD), however, there are many people outside of this situation who also suffer from PTSD. This blog is not meant to suggest that this significant group of people doesn’t exist. Here is some information about PTSD in multiple populations.

Of course, being in or around combat can cause PTSD, but any trauma (a frightening event), particularly those that are life-threatening, can also cause PTSD. For example, a person might suffer from PTSD after:

Trauma itself is not rare, and just like not all veterans suffer from combat PTSD, not all non-veterans who experiences a trauma suffer from PTSD either. In fact:

In spite of these high numbers, only about 7-8% of the population will suffer from PTSD at some point in their lives. Women are more likely to develop PTSD than men.

Number of Veterans who Suffer from Combat PTSD 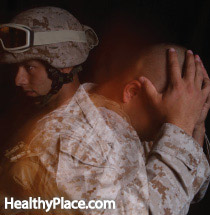 While 7-8% of the general population (including veterans) will experience PTSD at some point in their lives:

It’s also important to remember that other non-combat-related traumas, such as sexual assault do happen in the military. In fact, among veterans who use Veteran Administration healthcare, approximately:

Most PTSD treatments are developed for the population at large and few are dedicated towards combat-related PTSD specifically. That said, we do know that general treatments for PTSD work for many people no matter what the cause of their PTSD.

So while there are specific challenges faced by those with combat-related PTSD, we know that all people with PTSD can get PTSD treatment and recover.

Your all wrong. There is no such thing as psych disease and never was. When they gave us all Host dependent latent gene sharing stealth infections for decades all US has was criminals hoaxes and drugs used just to kill them faster.
http://www.lymeneteurope.org/forum/viewtopic.php?f=13&t=5147&sid=6c3d5f4751eb57abdf87d05a…
Throw your DSM's in the trash where they throw over 10,000 brain infected soldiers after adding to the mix of gene sharing stealth they knew they all had just to kill them faster.

there is no divide between PTSD and 'Combat PTSD', nor is 'combat PTSD' a medical term. They are the same disorder with exactly the same treatment
Combat PTSD gets more research and more clinical trials and funding. The area of PTSD with the worst funding is complex PTSD (see the proposed ICD-11 diagnosis and EPCACE in the ICD-10). Complex PTSD *does* have additional symptoms and does not respond to treatments like prolonged exposure therapy which are effective for other forms of PTSD.
see graph for differences -
http://www.dissociative-identity-disorder.net/wiki/File:Cloitre2013CPTSD.png
How about highlighting the Dissociative (depersonalized/derealized) subtype of PTSD, or complex PTSD, which are distinct, instead of creating an artifical divide which separates the "abused" from the "brave heroes".
Vets with PTSD don't put this artificial divide and stigma onto abuse survivors. But the media does and articles like this just intensify internal stigma that we must not talk about abuse.
Some forms of PTSD are socially acceptable, like those from combat or natural disasters, some are not, and funding and services are drastically reduced for them.
I'm unsurprised by the lack of references here. You won't find any research suggesting that combat PTSD and PTSD are different. Quite simply, they aren't. And yes, I read all the DSM-5 workgroup reports for PTSD.
Distinguishing PTSD, Complex PTSD, and Borderline Personality Disorder: A latent class analysis
Marylène Cloitre, Donn W. Garvert, Brandon Weiss, Eve B. Carlson, Richard A. Bryant
full paper on complex PTSD vs PTSD
http://www.ejpt.net/index.php/ejpt/article/view/25097
Dissociative specifier for PTSD explained - btw this affects the military as well, has a different course in therapy, and has excellent neuroscience behind it showing the differences in this form of PTSD -
http://www.dissociative-identity-disorder.net/wiki/PTSD#PTSD_dissociative_subtype_and_dis…

Interested in your comments. Are you a doctor or a combat veteran or something else?