Effects of Combat PTSD on the Children of Veterans

Last week I discussed the fact that combat posttraumatic stress disorder (PTSD) can be transmitted to children from their parents in cases where a parent suffers from combat PTSD. This intergenerational transmission of trauma, or secondary PTSD, can drastically impact a child’s behaviors. Symptoms of combat PTSD in children can range from hyperactivity to extreme withdrawal.

Effects of Combat PTSD in Children

The effects of combat PTSD in children vary depending on the symptoms experienced in the adult. Anxiety is certainly one of the most common symptoms and can be brought about through many of the symptoms experienced by the parent. For example, if a parent re-experiences the trauma, particularly to the point where it feels like it truly is happening again, this is accompanied by fear and anxiety that the child also feels. Children don’t understand what is happening and they may fear the parent cannot take care of them.

People with combat PTSD also tend to experience avoidance or “numbing” symptoms as they do not wish to re-experience the trauma. This often emotionally cuts them off from the child and the child may feel that the parent doesn’t care for him or her.

Hyperarousal symptoms, also common in people with combat PTSD, also affect children. Being on edge, angry, or aggressive much of the time can make a child fearful and wonder whether the parent loves him or her.

Symptoms of Combat PTSD in Children

These reactions in children are internal, however, and what the parents and other adults see is behavioral. Symptoms of combat PTSD in children can be seen, mistakenly, as a hyperactivity or conduct disorder or they may make the child appear to be withdrawn and a loner. And, not surprisingly, children often mirror the combat PTSD symptoms seen in their parent. For example, while most homes of veterans are not violent, of those that are, children are known to act out with violence as well. 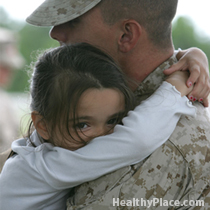 Symptoms of combat PTSD in children include:

It’s important to remember that children of parents with combat PTSD do not jut “grow out” of these symptoms; the effects of combat PTSD can be seen in teens as well. Problem behaviors are common in teens where combat PTSD is in the home. Teens may have a more negative outlook towards the parent with combat PTSD and more negative attitudes towards school. Teens also may be more sad and anxious and less creative, according to one study. In short, it’s worth dealing with parental combat PTSD no matter what the age is of the child.

In the next article, I will discuss some of the ways that a parent with combat PTSD can fight the effects that it can have on his or her child.

APA Reference
Croft, H. (2014, March 19). Effects of Combat PTSD on the Children of Veterans, HealthyPlace. Retrieved on 2020, July 5 from https://www.healthyplace.com/blogs/understandingcombatptsd/2014/03/effects-combat-ptsd-children-veterans

Can Combat PTSD Get Transmitted to Children From Their Parents?
How to Help the Children of Veterans with Combat PTSD
Peggy Fore Hatcher
June, 30 2014 at 11:05 am

Is there any information about adult children that grew up with a veteran parent that suffers with PTSD. My daughter has been treated with depression for years and sever anxiety disorder for more than 20 yrs. As a child her father diagnosed with PTSD. It took a lot of years for him to receive the right treatment through the VA. In the past year my daughter's anxiety has worsen and being in the work environment she express fears of being fired or not doing the correct things, not wanting to be around people and having a hard time expressing her feelings and staying defensive if there is an issue is brought to her attention, honestly it is almost like reliving the beginning of my husband's PTSD. She was exposed to more of my husbands PTSD issues than our youngest daughter. Where can I get her evaluated?

@ Krista, I felt the same way a few years ago and became involved with the local veterans newsletter. I wrote many articles regarding this issue from a spouse's point of view. I actually put out our entire personal story in a two part issue in order to shed light on what the families go through and how spouses and children suffer. I have done articles regarding post infidelity trauma since so many PTSD cases involve affairs as well. Our local vet center here also started a spouse's group and they offer marriage and individual counseling for the spouse as long as the combat veteran is being seen there as well. You are absolutely correct that there is not enough light shed on the responsibilities and long term effects that are put on the families of the veterans. I felt very strongly about that which is why I got involved with the veteran's organizations and tried to bring more spouses together for support, advice, etc. Our local vet centers are very beneficial if you are fortunate to have one in your area.

at what point are there going to be any studies on the devastation wreked upon the spouses of soldiers with combat PTSD? They are the main target of the rage, have to protect their children from it while trying to protect themselves at the same time and are the only adult in the home that is mentally capable to even try to fix things. If they only knew from the beginniing that they can't fix it and actually get some help, of which they is very little out there that is free, they still are basically unwittingly put in charge of an incredibly voloatile and possibly dangerous situation for years and yet the only person who gets any sort of compensation fron the govt is the one who inflicted all the pain and damage. write about that.

It is SO good to see this series about families, and and children in particular, affected by the PTSD of a parent. Too often, in mass media articles about PTSD, this topic is not considered or is glossed over, and it's an issue worth taking very seriously.
Any family with a parent who has PTSD is at risk for inter-generational transmission of the trauma. This isn't about some kind of mysterious contagion. It's simpler than that. It's a matter of parental dysfunction, in two areas: neglect, and abuse.
The most overt symptom of PTSD is often depression, and that easily leads to neglectful parenting. This means children who should be assisted in learning emotional self-management may NOT get the attentive parenting they need. While this may not seem like a big deal, in reality it can be more damaging than overt abuse, as many of us have seen in our consulting rooms, working with the adult children of depressed parents.
The other common overt symptom of parental PTSD is irritability and anger. This can lead to over-reaction to the natural stresses of child-rearing, and when directed AT the child, to overt abuse. This over-reaction can be easily exacerbated when there is parental self-medication with alcohol or street drugs.
Native American communities, with which I have worked in three contexts, have been devastated by this inter-generational transmission of psychological trauma, compounded by self-medication. These devastation of these communities is largely invisible to main-stream America, just as the effects of combat PTSD on military families tends to be.
A problem not seen remains a problem, and still needs our concern, care, and commitment. This series is a good step in that direction. I hope it is widely read.

You have hit the nail right on the head and described exactly what I am seeing in my own home. And furthermore what I have worked so hard to shield my kids from for years now... But thankfully (or not) within the last week, three of my six kids have come forward to talk to be about how they are feeling about things with dad's problems right now. I am extremely thankful that I have the very open relationship that I do with my kids. Ages ranging from five to thirteen, blended family. And I find it no coincidence that the kids having the struggle are my husband's biological kids. So now
...I search for counseling. My five year old I knew was not handling his anger in an age appropriate way and all said it was because he was the "baby" of the family. But... It's very clear he searches for more... He needs his daddy and he does not know how to express that the correct way. It was my job to protect him and make sure this didn't happen. I can't fix my husband, but I had one job with my son. And I failed him.