What is the Definition of Combat PTSD? 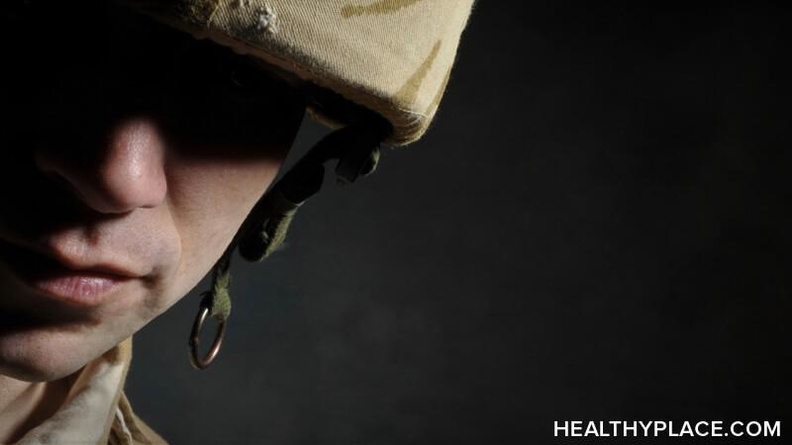 Combat PTSD is defined as a specific type of posttraumatic stress disorder (PTSD) experienced by men and women who have been in combat. Combat PTSD can happen to anyone in combat, from those that have experienced live fire to those who are support workers in a war zone area. Not everyone in combat experiences combat PTSD, but many do.

PTSD is a mental illness that can afflict anyone who experiences or witnesses extreme trauma that constitutes a threat to the life of an individual or another person. Not everyone who experiences this type of trauma gets PTSD and it’s unknown why some individuals get PTSD and others don’t (more on PTSD Causes).

Diagnosing combat PTSD is complex. It involves four components which I address below and provide examples of in this combat PTSD video.

According to the Diagnostic and Statistical Manual of Mental Disorders (DSM-5), in component one, a person must have: 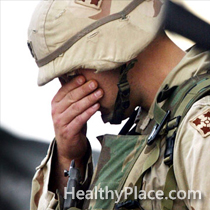 Of course, any of these can happen in a combat zone to any of the people working there. In fact, combat PTSD can even be seen in some family members of soldiers as they learn the traumatic details of what has happened to a loved one.

The second component involves the persistent re-experiencing of the traumatic event. This often happens in flashbacks of the events but could also happen in images, dreams, hallucinations and other ways. You might see someone with combat PTSD experiencing a flashback if they jump or hit the ground when a car backfires.

Thirdly, a person with PTSD must actively avoid stimuli that are associated with the trauma. This might be avoiding thoughts or feelings associated with combat or avoiding places that remind a person of combat.

Finally, people with PTSD experience negative thoughts and feelings associated with the event. Examples of this might be:

These types of things are often seen in people with combat PTSD and their loved ones often say that the soldier “turned into someone else” once they got back from combat.

Some symptoms seen in people with combat PTSD include:

The important thing to know about combat PTSD is that having these symptoms doesn’t make you crazy or weak. Experiencing combat PTSD symptoms just means that you are having a stress reaction to a nearly impossible situation. People with combat PTSD can be treated and go on to live full and healthy lives.

APA Reference
Croft, H. (2013, November 21). What is the Definition of Combat PTSD?, HealthyPlace. Retrieved on 2022, May 24 from https://www.healthyplace.com/blogs/understandingcombatptsd/2013/11/what-is-combat-ptsd

I would really appreciate some help from someone. My boyfriend has severe PTSD from 25+ yrs in the army as special forces and I'm just wanting to help him the best way I can

I do not appreciate specific deliniations such as "combat." I realize war is hell, but I have very serious chronic PTSD, and I have not been to war. The need for veterans to be acknowledged and get service and treatment is very real, it's just irritating that it's the one thing people consistently refer to when they talk about PTSD--and it does not include me.

You can't get mad. You clicked on a link that says What is the Definition of Combat PTSD. By you clicking on this link you should have known it was gonna be about COMBAT PTSD and not just PTSD in general.

Combat PTSD eludes to the fact that it was derived from war. That doesn't make non combat PTSD any more of less important, it's only a descriptor.

I suffer from Combat PTSD..I sorry you are affected with this horrible condition. Please don’t get bitter with us Vets...I bet any Vet with PTSD would help you in moments of stress....you can usually pick us out...if you are getting triggered look around we will help you like we would a Brother.

SmSeelig, I am a disabled vet and I am in my MSW program trying to find a way to reduce the symptoms of PTSD in Veterans with combat-induced PTSD. If you were to describe one problem with the treatment or VA accessibility to mental health, what would you say that would be? My ex husband was in the 4th ID when Saddam was found in the hole and he came back affected with this disorder. If you can provide any information of a problem you would like to see a solution to that could help. I am trying to earn my license in clinical social work to work in the VA helping my brothers and sisters overcome these internal challenges. Thank you

Let vets have PTS. It’s primarily an anxiety disorder, so call your problem “anxiety” or “anxiety disorder” or whatever suits you. I for one am tired of hearing “you don’t have to be a vet to have PTS”. Obviously. However, life is a little different after you have experienced death over and over, watching your friends die, being unable to save them, killing an enemy and wondering “why them and not me”. When you see death day in and day out at a young age, it changes a person. Please don’t trivialize vets experiences by comparing that it to growing up with a drunk or rowdy parent. Unless you’ve seen death up close and personal more times than you can count and feared you were next just as many, you don’t have PTSD. Be thankful and find something else to beat your chest about.

Billy Bob is absolutely correct. The article is literally on the subject of combat ptsd and even then, in the article itself, the writer includes everyone else that has ptsd but outside of combat and outside of even being in the military at all. Why are you getting so bugged, I mean...

sounds to me like you are looking for attention. If you have PTSD, I suggest you seek help, and maybe not look for excuses to cry about why there's an article that's not highlighting YOU. Suck it up buttercup

I thought the article was well written. On point regarding disorder. I am a U.S. Army Veteran and PTSD is real, I can vouch for that.