I have suffered from depression, on-and-off, since the age of five or six. It wasn’t until I was locked away in a psychiatric institution that I began to feel as though I was actually ‘mentally ill.’ 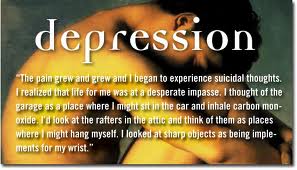 I’ve wrestled with what I’ve suffered from for years. Is it a chemical imbalance in my brain? Is it a normal response to the situations that were arising in my life? Will I always be like this? Am I mentally ill?

After the third hospitalization, two for depression and one for drug-induced psychotic mania, I began to realize that just maybe, I might suffer from a mental illness. But I decline to say that I currently suffer from depression, or any mental illness, because I truly and honestly don’t believe that I do. But have I suffered from depression? More than you could ever imagine.

But when I was in the thick of the depression and feeling suicidal, I never thought that what I was thinking was abnormal in any way. I remember often telling myself that the so-called ‘normal ‘ people were the ones who were mentally ill. I had a theory as a youngster that society would label the intelligent, those who saw life for what it truly was, a dismal place filled with ignorance, hate and greed, as depressed, so as to not have to take their opinions seriously.

I believed I was smarter than the ‘normies’ and that they were all just fooling themselves into being happy. That no one in their right mind could actually, legitimately be happy in this world that I could only view in such a dark and dismal light.

It was only when my depression began to lift, in my mid-twenties, that I realized that ‘hey, maybe there was something wrong.’

Even while I was depressed, I was always interested in researching and trying to come up for an explanation for why I felt the way I did. I never thought I had situational depression, because the situations in my life were mostly positive in childhood, and that didn’t seem to matter. I thought I had clinical depression because on the surface, things looked good and there theoretically shouldn't have been a problem. But looking back with a clear mind now, I can see that there has always been a problem. I was a shy kid who never really fit in. I didn’t enjoy the same things that other kids enjoyed. I was bullied.

One of my many diagnoses was of dysthymia, which can be a terrifying diagnosis. In simplest terms, someone with dysthymia goes through life essentially feeling like they are in a fog. They have difficulty enjoying everyday things and just float through life, sad most of the time.

So, What Did I Have?

I’ve been clear of mental health issues for over five-years now and have been able to analyze what my problem may have been.

My self-diagnosis was that as I didn’t fit in as a child, I developed situational depression. As my situation didn’t change, my depression worsened and by the sheer length and severity of it, became clinical depression. It altered the way I viewed the world and diminished my capacity to experience joy.

Then I got into drugs to self-medicate the sad feelings away. Which of course, only makes them worse in the long run.

Essentially, I was a depressed kid who got more and more depressed as my situation didn’t improve.

And now I know that what I was going through wasn’t ‘normal.’ Not everyone feels like that and no one should have to feel like that.

And if you feel like that, please talk to a mental health professional.

[...] nature of mental illness in the young, specifically attention deficit hyperactivity disorder, depression and eating disorders, I think it’s time that it becomes part of the teacher [...]