How Long Can Someone Be Punished for Having a Mental Illness?

Many theories abound as to why mental health stigma plays such a major role in society. But one undeniable truth is that the media have likely done more harm than good.

A Canadian news story caught the attention of the world in 2009 when Vince Li, a Chinese immigrant to Canada with schizophrenia, suffered a psychotic break and brutally murdered and decapitated Greyhound bus passenger, Tim McLean.

Should the Mentally Ill Be Locked Up Forever After Committing a Violent Crime?

As far as horror stories go, there isn’t much worse than someone taking out a machete on a public bus, decapitating someone and then parading around the bus licking blood from his fingers while holding onto the head of the victim. 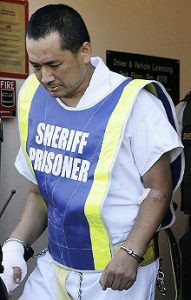 This happened, and it is absolutely astonishingly awful. There is no denying that. I can’t imagine what the family of Mr. McLean have gone through over these past few years. My thoughts are definitely with them as I’m sure they are dealing with more than I could ever imagine.

The reason I bring this up is that Mr. Li has caused yet another public outrage by recently being granted supervised access to the community where he is held in a forensic psychiatric hospital.

A recent editorial in the Winnipeg Sun seems to have a fairly good grasp of the public sentiment regarding this news.

Not Now. Not Ever

“His schizophrenia symptoms are being managed with high doses of antipsychotic medication at Selkirk Mental Health Centre. And according to his doctors, he’s doing very well. That’s great. We’re all happy for Li and we hope that he continues to take his medications and finds some type of meaningful life inside the walls of a mental facility. But he should never get out. Not now, not next year, not in 10 years – not ever.”

Not now. Not ever.

Mr. Li was found "Not Criminally Responsible" for his actions on account of a major mental illness. Not criminally responsible. Then why does society feel the need to criminally punish this man, for something over which he had little to no control over?

Mr. Li likely did not wake up that day and decide ‘I’m going to go on a bus and decapitate someone because that just seems like a neat thing to do.’ Mr. Li, in his deluded and paranoid state due to untreated schizophrenia, believed that Mr. McLean was an alien and that he was in fact saving the world by killing him.

As someone who has suffered psychosis, I can at least somewhat put myself in the shoes of Mr. Li. Although the things I did while psychotic cannot be paralleled to what Mr. Li did, I certainly can understand that what he was doing felt right at the time and that after coming back to reality, he likely felt absolutely awful about what he did.

Mr. Li was ill. Just like anyone else. But most people’s illnesses don’t typically result in the death of another human being.

And just as the newspaper article against him being granted supervised access to the community stated, he is being managed on medication and is doing quite well.

Take a Walk in His Shoes

We have already lost one life to this terrible tragedy and sadly we cannot bring back Tim McLean. But we don’t have to allow another human life to be thrown away because of it.

Imagine waking up from a psychotic rage to realize that you had ended an innocent life? Mr. Li has to deal with that thought every single day.

Put yourself in his shoes and ask yourself, ‘doesn’t he deserve a second chance?’

APA Reference
Curry, C. (2012, May 22). How Long Can Someone Be Punished for Having a Mental Illness?, HealthyPlace. Retrieved on 2022, August 13 from https://www.healthyplace.com/blogs/survivingmentalhealthstigma/2012/05/how-long-can-someone-be-punished-for-having-a-mental-illness

My Experience With Mental Health Stigma
Have You Ever Lied About Having a Mental Illness?
David Albert Newman
May, 24 2012 at 2:04 pm

I will soon visit Vince Li, peer to peer. While my paranoid schizophrenia psychosis was different in terms of not involving violence, I too did believe that I was the second coming of Jesus.

This interview with Vince Li was just released. A very interesting read that allows us to get inside the broken mind of a man who murdered under the duress of psychosis, and how it affects his every day life. An interview conducted with the Schizophrenia Society
http://www.cbc.ca/news/canada/manitoba/story/2012/05/22/mb-vince-li-schizophrenia-intervi…

As afterthought of this terrible criminal event,I can say that the punishment measures should to serve as corrective and ameliorative instrument for mischievious person, either mentally health or mentally ill ones. Otherwise, we would to going in vicious circle, when the feeling of vengeance would prevail. Meanwhile, as for psychotic person as executor of destructive actions, it could to say that they should to response for their respective incriminate act, in appropriate manner. Just for Mr. Li'macabre punishment, I would to augment the fact that in public predominates the fixed idea that mentally ill persons are more dangerous than mentally health ones. Forensic researches has confirmed the fact that the prevalence of destructive acts between two these categories of population is identical one. The problem is why this scientific veracity couldn't to implement in public opinion???

Thank you for the comment Jerry. I definitely agree with your position. Jail will not serve any purpose for Mr. Li. He needs the right conditions and the right supervision as well as the right environment and should he ever be released, he should definitely be followed quite strictly to ensure that he continues to take his medication.

I do not believe "jail" is the correct facility to place him in. Yes, he has to pay for him crime - sane or not - but in the right environment, the right conditions and the correct -strict supervision. A re-lapse is possible, and going off meds will start all over again.

It's a definite tough subject. But how can you be held accountable for your actions, if you were not aware at the time that they were wrong?

Oh that's terrible and the thought that he could be back in society must be awful for the family. He should be in jail for the rest of his life. I understand that he has a mental illness, I have bipolar, but he needs to be accountable for his actions. The schizophrenia is the reason but that shouldn't excuse him. Someone is dead at his hands.
Michele

Thank you for the comment. In Canada at least, those found Not Criminally Responsible are not given sentences. They are reviewed annually by a board of mental health professionals and then deemed as either a continued risk, or healthy enough to be re-integrated into society. And once someone begins the re-integration, they are followed closely by psychiatrists and mental health professionals to ensure that the medication is still working and that there are no signs of psychosis. If he did go off his medication, he could be brought back to the psychiatric hospital.

I don't think this man is being unnecessarily punished. While he may be doing well on his meds at this point in time, who is to say he won't stop taking them at some point due to not having symptoms anymore, or that the dosage will keep him stable for long periods of time. Due to the large margin of human error, he should be made to serve whatever sentence the judge passed down to him, or stay in an institution for the rest of his days.