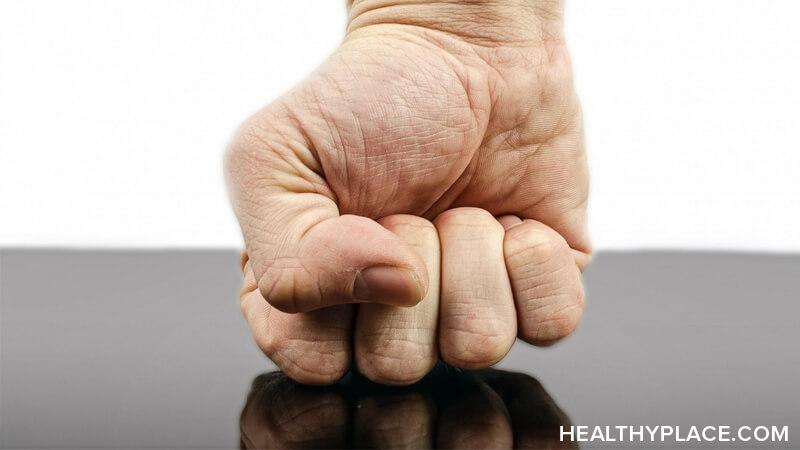 Not everyone who self-harms does so out of anger. Even when self-injury is fueled by rage, participating in self-inflicted violence doesn't automatically make you a violent or aggressive person.

I can't speak for everyone who self-harms, but I can speak for myself. There were times when I was truly furious—at myself, the world, or both—when I hurt myself. Sometimes, I let the rage take charge. I won't go into detail, but the point is I could be pretty vicious to myself.

But self-inflicted violence isn't necessarily a sign that you're becoming a violent person overall, even if you hurt yourself out of anger. Yes, I lashed out sometimes—but only with words. I was hurting. It's not uncommon or unnatural to lose your temper when you're in a bad headspace. I never lashed out in a physical sense when I was self-harming, nor have I done so since.

Physically lashing out isn't that uncommon, either, depending on several situational factors—not the least of which would be the severity of your actions. There's a wide gulf between punching a pillow and punching a person, for example. I would go so far as to argue that even an isolated incident or two wouldn't necessarily mean you're generally violent, though, at the very least, it would be a red flag that you need some extra emotional support (sooner rather than later).

In short, hurting yourself doesn't automatically make you more likely to hurt other people or act more aggressively toward others.

The thing is, self-inflicted violence is a bit of a misleading term. Self-harm isn't necessarily savage or brutal; some acts of self-injury are quite subtle and relatively minor in severity, at least in a physical sense. Emotionally, of course, any kind of self-harm is a significant warning sign that all is not well and that help is likely needed to make things better.

For myself and many others, self-harm isn't an act of aggression so much as an act of desperation. It can be punishing, yes, but it can also be rewarding—or at the very least, a relief. This is one reason why so many people find it hard to stop once they've started. Our brains play a trick on us that convinces us self-harm is the only way we can feel better, and the longer we rely on it, the harder it can be to believe that there are other—much better—options.

So if you're worried that engaging in self-inflicted violence will make you, or someone you love, more aggressive, know that this will not necessarily be the case. Instead, I urge you to focus on the more important concern here—self-harm itself. However you or your loved one may feel about the matter, know that self-injury is never the best solution. Self-harm recovery is always possible.

If you need convincing, feel free to leave a comment down below. I read—and do my best to respond to—every single message.