Self-Harm and "The Baggage Game"

Everyone people watches – it is in our nature. Whether you’re at the mall or at a restaurant, you look at people and wonder who they are and why they do what they do. As a kid, I always played a game where I’d look at a person and guess what they’d do ‘when they grew up’. Now, I think we all still play that game, but that game has turned more into judging than a game of Make-Believe.

More than usual, I’ve been people watching and wondering things about the people who walk by. I look at the tall man in the suit, chatting away on the phone and wonder if he really enjoys his job. I look at the woman with seven kids trailing behind her and wonder what she does when she has a moment to herself.

I look at the teenager walking with his head down, bracelets lining his wrists, and wonder if he self-harms.

What is the “Baggage Game”?

After Noon came out on Amazon.com, Nook and Kindle, I spoke to some area high school health classes. My goal was to talk about the issues in the book and really emphasize the mental health aspect of the story – meaning self-harm and suicide. 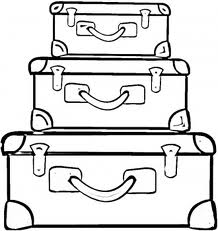 Being this topic is very uncomfortable for many high school teenagers to talk about, I decided to bring in an activity near the end of class that may make them take their mind off of the seriousness of the topic. I called this activity the “Baggage Game”.

The point of the activity was to make people realize that everyone struggles with something and that everyone has a life beyond the one seen day after day. The person sitting next to you could be the popular cheerleader at school, but at home her parents could be alcoholics. The happy, smart boy in science class could be depressed and contemplating suicide.

You don’t know the baggage people carry and everyone has some.

How Do You Play This Game?

Below is how the activity went down in the classes. Of course, it can be changed up and done in different ways:

- Get your hands on a paper with three suitcases on it – you can Google “Suitcase Coloring Sheets” and get a whole bunch.

- Of course, make sure you have some kind of writing utensil.

- Next, in each suitcase write something you are struggling with. For example, when I did this activity with the class, I wrote struggles from both my past and present: self-harm, up and down moods and weight insecurities.

- After the three (our more) struggles have been written down, rip the paper into as many pieces as you want.

- Now on every piece of ripped paper, write a coping skill that will help manage those struggles. Some examples that I used were pretty typical – music, writing, dance and talking to others.

- After the activity, you are free to throw the papers away if you want.

It was nice to receive emails after I did this activity with the classes about how much they liked it. Some students emailed me saying they did this if they were feeling frustrated in class. I’m not saying you shouldn’t focus in class, but if your emotions are overwhelming you to a negative extent, write down your baggage and rip it up later.

Ripping those papers sure made me feel better and I have a feeling it may help you too. Why not give it a try.

Struggling with Self-Harm and Low Self-Esteem
Self-Harm and the Emotional Roller-Coaster
Kayla Chang
May, 10 2019 at 1:50 pm

Hi P. Moore,
I'm glad you found this article helpful in your own life. The teenage years are a difficult time for many, but having the tools to just get through one day at a time can be of great comfort.
Kayla

Thank you for you insight and very useful game (activity) on how to help young people to address and manage their stress and their feelings. This is especially difficult for young adults/teenagers who are making adjustments in their lives as they become adults.
I thank you for this information and i will encourage others to play the Baggage game. I am a parent of a young man and I see that he sometimes struggles with self esteem and becoming an adult.