Taking Risks Is a Part of Mental Health Recovery 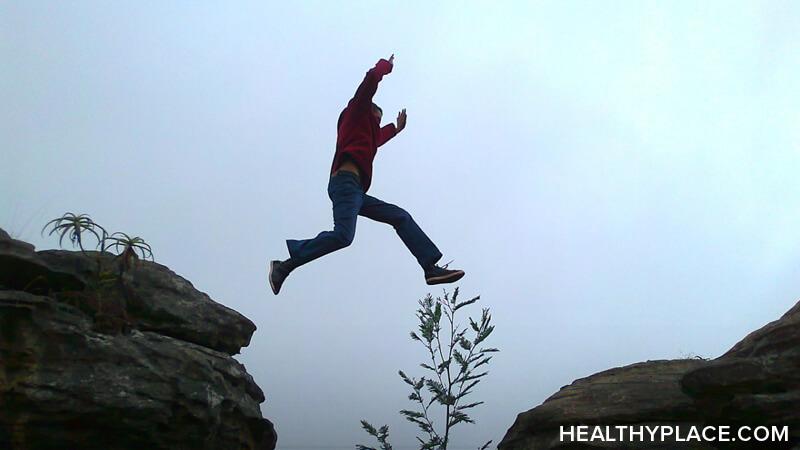 You'll never know what you're truly capable of until you take risks and push yourself. This applies to everyone -- with or without a mental illness.

There have been times in my recovery where I was presented with new opportunities that I could have very easily turned down. I wanted to play it safe in fear of becoming symptomatic. Sometimes it's easy to hide behind my diagnosis to say "no". Other times I was told to play it safe.

Living with a mental illness is challenging to say the least. It took me quite a while after receiving my diagnosis to get to a place where I was not only stable but also thriving. Even though I am in mental health recovery, I have taken risks to get to where I am today.

I Learned to Take Risks as a College Student

I struggled between playing it safe and taking risks during my time as a college student -- which lasted 13 years. A college degree had always been important to me, and I would have been crushed if my mental illness had prevented me from getting it.

I dropped out a few times, and it would have been so easy to quit right then. I felt defeated and would often blame my mental illness. I was scared to go back, and at one point I was told, "College isn't for everyone." I would generalize, too. College must be impossible for everyone with schizoaffective disorder.

The truth is, college is difficult for almost every student and everyone has his or her own story and struggles. Schizoaffective disorder just happens to be mine.

I bolstered up my courage and went back, and it was worth it to take the risk. I finally graduated in 2014.

From that point on I decided that I would never hide behind my diagnosis. I might become symptomatic if I take a risk, but I might also accomplish something great. You never know until you try.

I'm not trying to downplay the seriousness of mental health issues, but I don't think receiving a diagnosis means you have to give up on achieving your goals. Mental illness does not make you a hopeless case. It just means you might have to take a different path.

It's also okay to admit defeat if you fail. At least you tried. You can move on to a different goal.

Mental health recovery takes some getting used to. You have to get into a routine, practice some healthy living skills, and learn what works best for you. Yes, mental illness makes life difficult and recovery takes work, but that doesn't mean you have to give up on your dreams. It means you have to adapt and be flexible and patient. You may have to find another way to achieve your goals, and that could include taking risks. In my experience, it has been worth it. I would rather try and fail than live with regret. Don't let your mental illness steal your ambition. You deserve a full and meaningful life.

Helpful or Unhelpful? A More Effective Approach to Recovery
3 Tips for Coping with Summertime Depression