The Bill Cosby Case Can Teach Us Three Lessons

Years ago, Bill Cosby had jokes as part of his routine about drugging women in order to have sex with them. At the time, it was considered funny. Now it's considered creepy and may even be evidence against him. But it never should have been considered funny in the first place.

The Bill Cosby Case shows that rape culture is deeply embedded in American culture. Every college and university starts off freshman year with a "here's how not to get raped" seminar for women--the burden is on the victim to prevent the crime. I've never heard of a "here's what consent is and why you must have it" seminar for the men who might perpetrate the crime.

Recently, I signed a contract to publish a Bible study for sexual assault survivors. In the Bible study, I use the example of robbery to illustrate consent. Let's say a robber demands your wallet and you give it to him without fighting. That hardly means you wanted him to have your wallet. You cooperated because it was the safe thing to do. That's not consent by any stretch of the imagination. It doesn't matter if you looked rich in a poor neighborhood, if you like to give money to people, or even if you're drunk. Your wallet was taken without your consent and that's a crime. Replace sex with wallet and you have an understanding of how rape works.

I saw a Facebook meme that perfectly illustrated the double standard in sexual conduct.

If 40 men say a woman is a whore, we believe them. But if 40 women say a man is a rapist, it's questionable.

Rape is the only crime in which people always disbelieve the victim. We never think a robbery victim is making it up for attention. We never think someone is lying about their car getting stolen because otherwise the thief will have too much power. We never accuse an extortion victim of trying to ruin the perpetrator's life. We never accuse assault victims of destroying a legacy. We've seen all that with the Bill Cosby case. 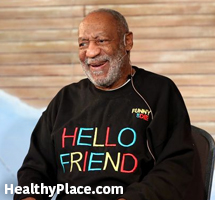 This disbelief plays havoc with the victim's emotions. The rate of posttraumatic stress disorder (PTSD) among rape survivors is considerably higher than among survivors of other types of trauma (Effects of Rape: Psychological and Physical Effects of Rape). The burden of proof is on her, and even videos and physical evidence aren't always enough to convict.

It doesn't matter whether or not Bill Cosby is guilty. It doesn't even matter that it's Bill Cosby. The victims will still be disbelieved at best. And so far, we've watched just the warm-up to the worst treatment they'll receive.

Sexual predators prey until they get caught and treated. It doesn't matter if they're married or not--they prey because they're sick and driven by a sexual obsession.

Bill Cosby is probably a sexual predator--even if every allegation is false and the sex was consensual, who sleeps with that many people other than a sexual predator? Who jokes about drugging and raping unconscious people? What kind of person spends time at the Playboy Mansion?

Regardless of what happens with Bill Cosby's trial, there are three lessons we can learn from the Bill Cosby case. Now is the time to talk and act.

APA Reference
Oberg, B. (2016, January 4). The Bill Cosby Case Can Teach Us Three Lessons, HealthyPlace. Retrieved on 2022, May 16 from https://www.healthyplace.com/blogs/recoveringfrommentalillness/2016/01/three-lessons-the-bill-cosby-case-can-teach-us