Are People With Schizophrenia Perpetrators Or Victims?

On National Public Radio (NPR) today, I heard an array of psychiatrists and parents speak about the mental health system, and how to better protect the public from the criminal behavior of those with severe mental illness. The argument was that society needs protection from us, so that the tragedies and shootings that have occurred over the past decade can be prevented. They spoke of gun control, forced hospitalization and increased access to care. Many of these points are valid, and yet their entire perspective on mental illness is heavily flawed.

People with Schizophrenia Are Not Rabid Zombies

The state and it's law abiding citizens are not under attack by thrones of mentally disturbed individuals as many would believe. We are not rabid zombies, but people in need of medical attention. This flawed belief propagated by the media not only stifles rational solutions to the problem, but makes it dangerous for people with schizophrenia to live their lives free from victimization.

Victimization of People with Schizophrenia 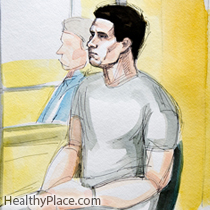 Victimization rates are very high for people who suffer from schizophrenia. Some indicate that you are five times more likely to be a victim of homicide if you suffer from schizophrenia. Others find that we are more likely to be victims of violent crime than perpetrators. Despite these statistics, the debate about schizophrenia tends to focus on the safety of others, rather than our own safety. It is as if our safety is less important.

I have personally experienced some of the discrimination that people with schizophrenia face on a daily basis. In certain instances, an individual can feel threatened by the mere presence of someone with schizophrenia. This, in turn, creates an environment that is potentially dangerous for us, as someone can preemptively attack us. The stigma of schizophrenia itself, in these cases, can cause violence. Only within the last decade I've experienced two burglaries, multiple thefts, vandalisms and threats. While the motivation for these crimes are largely unknown, I can attest that in at least two of these cases the motivation was prejudice from comments made prior to the crime.

The debate on mental health should not be about "us" versus "them." Society is not the exclusive victim of schizophrenia. There are two sides to this debate, and no psychiatrist, parent or radio show could convince me otherwise. Next time NPR has a show about mental illness, maybe they should be more balanced. There are many victims to this illness, not just ordinary citizens. My safety is just as important as anyone else's. Focus on that, for once. Are people with Schizophrenia victims or perpetrators? I would say a little of both. I am willing to admit it NPR, why don't you?

Thought Manipulation And The Psychotic Mind
How Schizophrenia Currently Affects My Life
Sean
July, 20 2014 at 10:56 am

CONCERNING SCHIZOPHRENIA, assumption is at the moment, rampant.
Currently, there are two fields of incompleteness. These two fields of incompleteness are known as Science and Religion.
These two separate fields of global interest are governed by two separate differing groups of equally closed minded folk.
If either field was complete in revealing that which is true/real, there would be no room left for the other, since complete means complete. But since these fields remain separate, and thus remain incomplete, a complete singular connection to that which is true/real, thus meaning a complete connection to reality itself, has not, and can not, be achieved.
Thus, even to this day, people are still not truly in touch with reality.
What is reality ?
An apple has an inside and an outside. So does reality. Currently we are present with-IN reality, thus we are located on the inside, not on the outside. On the inside we are always confined to the present moment even though we are moving across time. The outside extends across all time other than the present moment.
In the world of Science, the outside is indirectly seen as nothing but "The inexplicable mysteriousness of Quantum Mechanics", and that is all.
In the world of Religion, the outside is known as the "Spirit World".
In short, today's physicists do not include the outside in their collection of the currently "acceptable" laws of physics. They leave that side to the religious folk and their "Spiritual World" interpretation.
The laws of physics on the outside are different than the laws of physics on the inside, and this is due to the laws of physics on the outside also including that extension across the dimension of time, rather than it being confined to merely the present time only.
As a consequence, whenever an event is governed from the outside, today's physicists once again are stunned by "The inexplicable mysteriousness of Quantum Mechanics". After all, today's physicists still in general only think of 3 dimensional events, thus when events such as this occur, meaning a 4 dimensional event has occurred, they still can not fathom its meaning, nor know of its source.
Thus today's physicists are still puzzled when it comes to Particle-Wave Duality, the Collapse of the Quantum Wave, Entangled Pairs, Action at a Distance, Delayed Quantum Choice, Quantum Erasure, etc.
Only when you take both sides into account, can one understand what reality is, and therefore what the so call "Schizophrenia" truly is.
The inside of reality truly exists.
The outside of reality truly exists.
Those whose minds point toward "TRUTH" see the outside as well, since the outside truly exists.
Those who only see the inside are unable to see the complete truth.
Those who are unable to see the complete truth and thus are not completely in touch with reality, are those whom are so limited, so bounded, that they still base decisions upon beliefs, disbeliefs, opinions and assumption, etc.
As a consequence of such retarded and backward behavior, they also make absurd claims.
As an example of this, with absolute unbounded certainty, the medical field states that "schizophrenia" is nothing but a mental illness. They are absolutely certain that the "schizophrenics" are seeing and hearing things that have no true foundation. Meaning, they state that there is no true foundation to support such occurrences as being real independent events of some kind or another. Instead they claim that it is nothing other than being the result of a brain defect, and that the source can therefore be of no other source than the brain itself.
But this is insane. To be absolutely certain of something, one must wrap ones mind around it completely, and thus in turn one has seen all that surrounds it and thus has seen all that supports it.In doing so, in seeing it all, one also sees the entire cause. Yet every day the medical field comes up with a new theory as to what the cause actually is. On top of that, they constantly come up with a new theory as to what schizophrenia actually itself is, as they continue to look for a more complete and thorough understanding.
And so, as insane as it is, they are absolutely certain that it is a mental illness, yet they have no absolute understanding. Thus they claim that one can successfully surround something, while at the same time believe that the very act of surrounding it is not a requirement to do so.
In turn we are left with a moronic set of arguments.
One side practices insanity and claims to have reached certainty, while at the same time they include assumption as part of their equation.
The other side has only advanced from the stone age to the brick age and in turn still speaks of "Demonic possession." rather than look at the problem at hand in a truthful technical manner.

I can only agree with you. Very few people with mental illness of any type are dangerous to others
Sadly though the media in their unending quest for ratings, sales and advertising revenue resort to more and more if a sensationalist style if reporting
When there is a case of someone with schizophrenia doing something terrible, such as the Tim McNeil case in Canada a few years ago, that provides fuel for many years of reporting and referencing
I do think that sadly some peoples illness can make them too dangerous to walk the streets ever. 99.9% of people with schizophrenia will never be a danger to anyone they all get lumped into the same pile as "homicidal"
Society in general has a lot of learning, a lot of maturing to do before there is significant change in perceptions
I just hope I am alive to see it

thank you for the informative article, Dan. I have a brother with schizophrenia which he has chosen not to treat, and he has been victimized many times. property destroyed, threatened, and had people convince him he should give them his money, ie financial abuse. It is both heartbreaking and infuriating. he is a gentle soul, and is fearful of others alot.
sharon

Very good article. The vast amount of criminal behaviour is not committed by those with mental health issues like schizophrenia. Our society wants all perpetrators of violence to be "ill" so they don't have to think that "regular " folk can commit these acts. Most persons with schizophrenia would rather be left alone than seek out persons to harm.

My 31 year old brother is more scared of everyone around him than we need to be scared of him. It's sad. No win situation.

Yeah, it must be very hard on families. I can only imagine.