Thought manipulation and alien persecution are common themes in delusions associated with schizophrenia. I wrote this poem several months after I was off my schizophrenia medication and believed that celestial beings were controlling my thoughts. In essence, these other worldly entities were the puppeteers of my ideas and actions, and I was their marionette. It was a truly terrorizing experience that many people with schizophrenia endure.

What was I saying?
How am I here?
Who am I speaking to?
This is so queer. 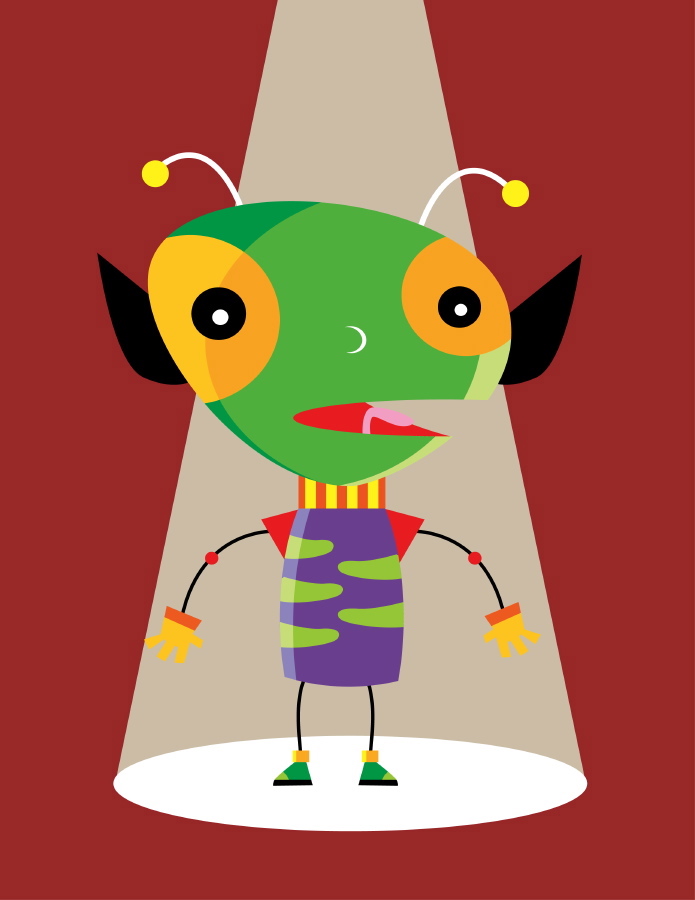 I wrote this next poem soon after I recovered from a psychotic episode. In the poem, I am trying to hide from aliens who I believed were spying on me from inside their UFO's. I believed they were inserting technology and devices inside of me to better track my movements and ideas. I desperately wanted to escape from them, but felt like any attempt was futile at the time. I had even considered using powerful magnets to interfere with the tracking devices, but was medicated before I was able to do so.

And so I hide,
From their peering eyes,
As they sit in a spaceship,
High in the sky.

Their technology knows,
That I am here,
as I quiver and groan,
In fright and fear.

End Mental Health Stigma with the Culture of Schizophrenia
Schizophrenia, Paranoia and the NSA
Ray
April, 14 2018 at 2:22 am

Wonderful, I really think so! I’ve just spoken out to my doctor about living with schizophrenic symptoms in silence (I’ve had two previous psychotic episodes but this is different; completely different) your poem was really great to read as this is one of the symptoms o have similarly. It’s so frustrating. I was also quite sane before all of this :(

I have just come across this as an attempt to find information on people's experience with what we believe as aliens. I have schizophrenia myself and have been dealing with it for two years , there is no doubt that I do believe they are real but imagine if we were there technology and by the use of emotions they control us. I have never seen aliens, most of my visions that I have experienced was of a vast spiritualism that exceeded it self to explain that we were parts of the universe experiencing itself and that heaven if existed was our home or reunion with what ever material matter we began as and with most of that it made itself appear as alive the whole universe was alive and with this enlightenment I began to think we constructed ourselves as beings to support the idea that we were a lost race that needed to find heaven in any means we can. This idea eventually began to grow as my voices started growing and my ideas began to grow. I began to believe my voices were created by aliens. The worst thing is ill never really know if Iam right or wrong . From a science point of view or doctors I just have a case oof schizophrenia which I don't believe is wrong I just think aliens are also real also. I don't know much about it but in yoga we are believed to exist from plains of existence that hold bounds to different realitys what if this real in terms of schizophrenia what if by some choice we have left this plain to search for the new Land or haven and in terms of science it is developing a sort of disorder . I wish i could explain it better i have become such a different person since i developed schizophrenia . I used to smoke a lot of weed and really hallucinate hearing voices from other rooms talking about me believing we were aliens but we were there robots because they existed in an other universe which was different to ours maybe it is real maybe it's another wall of psychosis i just wish i new what was the real awnser

Dan,
Just this past weekend my sister who has had Paranoid Schizophrenia for over 20 years reached her worst when she believed "zombies" were chasing and trying to kill her, and became involved in a crash with a semi and another car. Miraculously she suffered no body injury and drivers of the other vehicles were unharmed. Weeks before this, she began to sprinkle salt in the entrance doors to the house and rooms, and even on her bed. In the past, she'd spray Lysol behind anyone who left her presence. She adamantly refuses to take her medication, even medication for the cancer she has because she believes it's a conspiracy to kill her. She also believes she can tell by looking at a pill if it is generic or not; and if generic will not be of benefit to her. She will not drink from a glass or cup unless she can see the bottle or can opened in her presence or purchases it herself. I said bottles or cans, but actually, she will only drink if it comes from a can. I could go on and on about her paranoia. But I just want to say thank you for sharing your experience with this devastating condition. It is of some comfort to know that we are not alone in this struggle, and I sincerely wish the best for you.

Thank you. Wish you the best also.

Dan,
Last October 2013 when I was at my worst for seeing aliens and other entities, I was hospitalized until my prescribed medications began working. At the time of my discharge I did not have as severe sightings. I worked through my fears by burning sage in my house to purify it. On my new medications I am not afraid anymore. Even on my new medications, I still see aliens and other entities in my digital pictures and videos, but now I do not act out. With the help and support of my nurse boyfriend, I accept what my mind sees. Even-though his mind does not see what my mind sees, we talk about these things. I finally found a doctor that understands me and my perceptions of the world around me. Your doctors are only as good as the information you give them. Find a doctor that you trust and follow the treatment plan that you both agree upon.
S.
P.s. Please reply how you are doing.