Separating Yourself From Schizophrenia 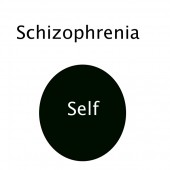 I am many things to many people, but I am not a disease. This is a distinction that many people misunderstand about people with Schizophrenia. Most of my behavior when I am feeling well, is dictated by my personality and personal choices and not my illness. It is only while not under medical care that the disease penetrates into my behavior and personal life.

When you are diagnosed with a serious mental disorder people tend to attribute everything you do to that disorder. When I recently injured my back, many people around my wrongly believed that I was having an episode. Likewise when my sleep has been poor as a result of a sleep disorder, people wrongly attribute the effects to that of Schizoaffective disorder.

These are examples of difficulties many people have in separating the symptoms of a mental disorder to that of other ailments. Schizophrenia, I believe, is something outside of the “self” and needs to be treated as such. It is not ingrained in our personality, and is not a result of personal choice.

If you have Schizophrenia, try to remind yourself that you have a disease of the brain and not a personality flaw. This will give you a better chance at fighting it. I believe acceptance is the first step to recovery, and accepting an illness as stigmatized as Schizophrenia can be daunting. I think some people prefer to remain outside of reality and deny treatment because of this.

I am many things to many people; I am a writer, a poet, an advocate, and a business owner. Schizophrenia effects many of the things that I am, but it will never dictate who I am. Remember this and you will be one step closer to your goal; seeing yourself and reality for who they are.