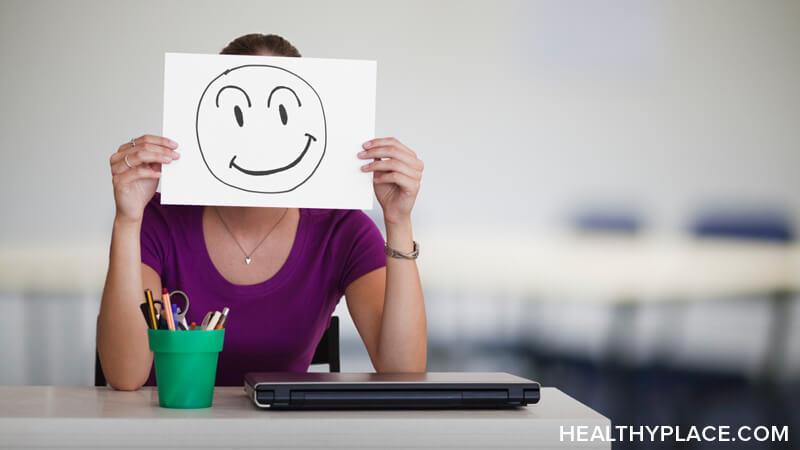 I’m sorry to say I have found bipolar disorder requires a fake smile pretty much on demand, every day. We all have fake smiles for different situations but mine need to be at the ready, at all times, because I use them more than others. Fake smiles with bipolar disorder suck, but what can I say, I need them.

I know that we all have fake smiles. Someone asks you how your day is and you likely smile and say, “Fine.” That’s just a social norm.

But I suspect that your average, non-mentally ill person brings out his or her fake smile considerably less than I do. For example, during the day, many things will elicit a genuine smile from people. This is normal and this is so often not the case with me.

I know that during the day, I’m unlikely to truly feel happy. This is because I experience anhedonia – an inability to experience pleasure. And those with other symptoms of depression may feel similarly. Depression feels like the weight of the world is constantly on your shoulders. It feels like a film exists between you and the world and stimuli from the world is just blasé and doesn’t seem real to you – it doesn’t reach you in any real way.

And so I need my fake smile. When there are things that “should” make me smile, I need to follow through with an actual smile. People really don’t like it if you never smile. It just doesn’t work on a social level.

Learn more about what I call a “manufactured” smile and what it means for a person with bipolar disorder and those around him or her.

I think people need to know that if bipolar disorder induces fake smiles, it’s not something to be judged. You shouldn’t feel bad about the fake smiles that are needed for socializing. Those around you should not judge you either.

People sometimes know when I’m fake-smiling due to bipolar disorder and I’ve been known to feel bad about it. But I try not to. And I should say that smiling, even when you don’t want to, is the better option for you mental health anyway.

I know what I need to do to make social interactions work, and part of that is fake smiles. I’m sorry, but it is.