I have had many adrenaline rushes as I used to paraglide and skydive. Those two activities led to about 200 adrenaline rushes and I enjoyed the vast majority (almost dying will also give you an enormous adrenaline rush, accomplished on at least one of my skydives, but it’s not nearly as fun). But, really, I don’t think I was paying close enough attention to any bipolar symptoms, at the time, to really see the effect the adrenaline was having on my bipolar.

I do remember the rush and I do remember the crash afterwards, but these are pretty normal adrenaline reactions. Of course, my bipolar disorder was not as bad during these times so that likely impacted my experience of adrenaline.

But this latest adrenaline rush was different. As I was walking outside the building I was freaking terrified. I didn’t really think I would be, but I was. Looking straight down was petrifying as the guide pointed out landmarks and so on. At the beginning it was all I could do just to not crush the tether to which I was tied to the building with all the strength my hands could muster. 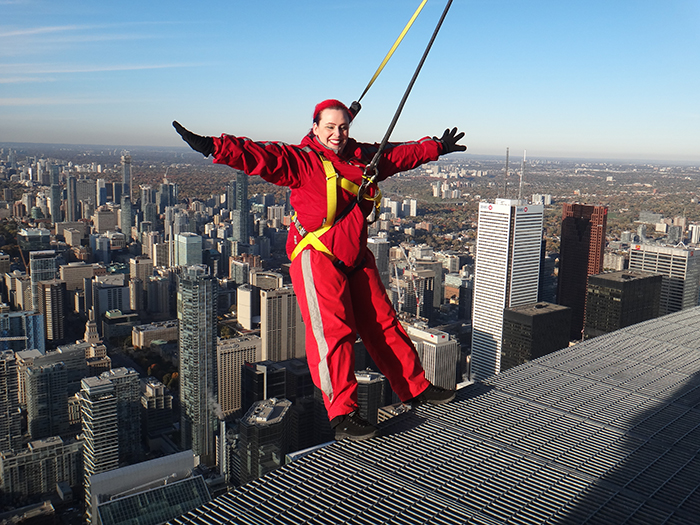 But eventually, (rather quickly, actually) it came time to actually hang off the side of the building. I did this both leaning backwards and leaning forwards. Even thinking about it now my stomach gets a little squigy. I was quite sure, at the time, that I would be the first of the 85,000 people who have done this to break the harness or tether. Like, seriously.

Naturally, I didn’t. Naturally, I, like all the other people, was fine. Safety is kind of their thing, way up there.

Adrenaline’s Impact on My Bipolar Disorder

It is a depressing realization that I have to hang off a building at 1168 feet to feel like a person. I told this realization to the person I was with and it struck him sadly. It is a truly sad thing.

All that being said, the break from my normal experience of bipolar disorder was seriously welcomed and it actually gave me hope. Yes, I had a depressing realization, but I also realized that my body was still capable of feeling something other than pain. I didn’t know if it could, after all this time. But it can.

So maybe, just maybe, this means I’ll get that feeling back one day but in a more sustainable way. Maybe I’ll figure out how to beat back this bipolar a little bit more. Maybe all my future days won’t be the same.

And that is not a depressing thought at all.

[Postscript: In case you were wondering, a crash after that much adrenaline is nasty. It requires lots of rest and lots of doing nothing. Well, if you’re me, anyway.]

Tips on Bipolar Disorder and Planning
Bipolar and Managing Extreme All-or-Nothing Behaviors
Andrew
June, 19 2018 at 12:39 am

Thank you for telling this story! I'm left wondering about the therapeutic implications of such experiences for those of us with mood disorders. Very interesting indeed.

Why lie? Why would you tell us that all of these comments were written today at the same time? That makes me sick. [moderated]

Hi Anon,
I apologize for your seeing an incorrect date on comments. It is due to a recent technology upgrade. We are working on rectifying this issue.
I'm sorry for any concern this may have caused.
- Natasha Tracy

I am a 58 year old M.D. Due to my Bipolar Disorder/Substance Abuse/ADHD I unfortunately lost the privilege of practicing medicine in 2003. A devastating loss of course. Quite a mind/life changing experience. I PLAN to write down my story and see if I can get someone to publish it. The problem is my energy level. I was self-diagnosed (the psychiatrist I went to agreed with me!!!) at the age of 30. I was in my Internship at that time. I KNOW I had the symptoms when I was 12 because that was when I tried alcohol and it became my solution. Alcohol did for me, very quickly, what I couldn't do for myself. I have been in and out of treatment centers since March of 1990. I have been sober now for a year and 8 months this time. I feel like if I relapse again I won't have the strength nor interest to ever stop again. Since I first saw Nicholas Cage in the movie "Leaving Las Vegas" I decided that was my fate. That is the type of thinking that comes from my mental illnesses. In any case, my experience with adrenaline rushes (in hypomanic and manic phases) is mixed. If I'm in low hypomanic phase it is WONDERFUL!!!! If I could figure out a way to stay at that level or even in a medium hypomanic state I would have a GOOD life. My experience with Bipolar Disorder is being in hypomanic states that eventually turned into full blown manic states. In full blown mania I am a person that nobody wants to be around. It is a person that I don't recognize nor does anyone else. The adrenaline rushes feel FANTASTIC while you are in the rushes. Basically with the dump of dopamine into the brain and the adrenaline rushing through my bloodstream it is like being on methamphetamine or cocaine. Ergo and to wit my tolerance for alcohol and other CNS depressants. I could tell stories about many drugs but alcohol has ALWAYS been my drug of choice. Before I went to my first treatment in 3/1990 my tolerance had reached quite a high level. I could drink a case of beer and a fifth of vodka and still function without slurring my words. That is due to the dopamine and adrenaline. I have always has this theory about adrenaline having analgesic properties, at least for me, due to many instances. For the last year or so I was in a mildly depressed state. I HATE the depression side of Bipolar!!! I have a torn rotator cuff in my right shoulder. Even without lifting anything if I place my right shoulder/arm in the wrong position I experience severe shooting pain and then some numbness in my hand. I have just been through a high hypomanic. I had so much energy that I didn't know what to do with it. I decided to mow my lawn and I did it quickly and vigorously. I realized that I was not feeling ANY pain in my right shoulder/arm. Several hours later, after I had done some things that help slow me down (other than CNS depressants) I noticed the pain returning. At that point I realized that my theory had been proven. I don't know if anyone else has similar experiences with adrenaline rushes but that is my experience. Thanks for listening.

Hi James, a lot you described triggered thoughts of my experience. I was diagnosed very late, after more than 30 years of symptoms. I try to be very short: a nearly fatal car accident 37 years ago, years of recovery, since then in chronic pain - but I've learned to live with it. Depression: I thought because of dealing with constant pain. Hypomania: I thought that is my normal state and didn't understand why other people were so lazy, slow, and had to sleep so much. :) I've been an artist, almost 'enjoyed' the depression because they gave me a subject to work with. Very successful, got many awards. First time showing my art to others gave me an adrenaline rush. Parallel I did dangerous things - (in my manic phases, without feeling pain, searching for another way of getting an adrenaline rush, giving me the feeling I am alive) I thought I needed it to show myself that the accident didn't take away everything. When I met people I was either in a hypomanic state, boosting where I have been, what I've accomplished (without realizing the 'boosting' factor or what terrible impression I left of course) other times I didn't speak a word with others because I was afraid of communication, afraid that I had nothing to say, afraid that I said the wrong thing... Later I learned that people thought I was extremely arrogant. Sleeping just 3 -4 hours/night burned me out. constant jetlag didn't help. I was offered a job, I took it and managed to keep it for 10 years, but had to work more and more and became less efficient because my brain was so foggy for not sleeping sufficiently. After 3 times in the ER within a month, I successfully applied for disability. Losing my job and losing my income got me in a deep phase of depression. I had my drinking under control while I was working, but it became uncontrolled it after I lost my job. I started in the late afternoon and needed much less than you because my tolerance level was much lower, but still, I drank to feel better, to forget, and avoiding to face reality. Since it was a relatively short time (2 years till I was diagnosed with bipolar disorder and got my pills), I managed to get out of my drinking habits on my own. I can hardly imagine what it takes to break a very long habit. Congratulations to you for being sober! I saw two fantastic doctors, one for psychiatric and one for psychology, who worked together. The psychologist finally diagnosed me with being bipolar and I got the right pills to level me. I am taking the least amount possible, otherwise, I feel like a zombie with no energy at all, sleeping 9 -11 hours or even longer. I still don't feel pain when I am in my hypomanic state and hurt my body through work, but I forego the pain for the pleasure I get from working in my garden in a hypomanic phase. Sometimes I miss my manic phases, the feeling to be on top of the world, being brilliant, and invulnerable. Since I am on pills I am not seeking for adrenaline rushes anymore - there is a clear connection for me. Unfortunately, my creative drive is gone as well. I moved, I changed my life totally, my awards are in a box, nothing around me reminds me of my past. I am trying to live NOW, and most of the time I can manage. Write your book. You'll do it probably more for yourself than for anyone else. Rethink the idea of searching for a publisher. Do you have the tenacity to go on and on when you get on rejection after the other? Will any rejection be seen as a failure that gets you into another phase of depression? The market is small, stories written by people with bipolar disorder/addictions have already been published. And finally, I agree: adrenaline rushes, manic phases and feeling no pain go hand in hand.

Really Appreciate this post, how can I make is so that I get an email when you make a new post?

Yes you have to bless yourself with life threatening moments to feel like a real person, or anything at all that resembles what god intended when he breathed life into you. Since we are all different, its OK to be different. My similar experience atop the unfinished Americana hotel in New York (1962) was also a real/unreal rush. I walked away from near disaster feeling whole again. Definitely not something for everyone. However not everyone feels like there life isn't worth living at times. You did what it took to feel something!!

Just found out I'm bipolar. Now I can start to deal with it.