Have a Mental Illness? Go to Jail

Recently I spent the night in the psychiatric emergency room. While I was there, the police brought a suicidal drunk woman in. Short version: she created a huge disruption, refused treatment, tried to leave and was eventually arrested for public intoxication.

Mental illness, especially when combined with a substance abuse disorder, is an easy way to wind up in jail.The prevalence of mental illness in the criminal justice system

According to PsychiatryOnline.org, 6 to 15 percent of people in city and county jails and 10 to 15 percent of people in state prisons have a severe mental illness. These individuals generally have an acute and chronic mental illness and are poor functioning. The report blames "deinstitutionalization, more rigid criteria for civil commitment, lack of adequate community support for persons with mental illness, mentally ill offenders' difficulty gaining access to community treatment, and the attitudes of police officers and society." 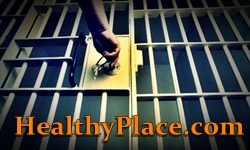 In 2005, PBS's FRONTLINE aired an episode about this phenomenon, "The New Asylums". According to this episode, almost 1 out of 4 inmates has a mental illness. That's not factoring in borderline personality disorder (BPD), depression and anti-social disorder. Factor in a dual diagnosis (mental illness and a substance abuse disorder), and the National Alliance on Mental Illness (NAMI) estimates well over 50 percent of inmates meet this criteria.

I'm fortunate: I don't have a criminal record largely due to my location. Most of the crimes I've committed--usually intimidation--were a result of my mental illness. I've gone to the hospital instead of jail.

Why? Probably location. Indianapolis has a Crisis Intervention Training (CIT) program, which provides training to police officers on how to deal with individuals with severe mental illness. There are hospitals that accept indigent patients in psychiatric crisis.

According to a joint report by NAMI and Public Citizen's Health Reserach Group, 29 percent of the nation's jails routinely hold people with a severe mental illness with no charges against them. In other words, nearly one-third of the country's jails are makeshift psychiatric wards--psychiatric patients--without criminal charges--are being held in jail to wait for an inpatient bed.

It varies by state, with Kentucky being the worst. There, according to NAMI, 81 percent of the county jails hold psychiatric patients with no criminal charges. It also varies by county. Montana's Flathead County holds the record for housing the most people in this category; only the county jail--not the local for-profit psychiatric hospital or the local general hospital--accepts emergency psychiatric admissions.

Why this is unacceptable

It all comes down to "Is money worth more than human life?" While we as a society often say no, our actions indicate that yes, it is.

When institutions began to close, many of the patients had nowhere to go. They went to the streets. There, they didn't receive treatment, and their conduct often resulted in arrest. Since the promised community-based treatment never materialized, the only place for them to go was jail. In jail, there was hope for treatment. Fast-forward to today, and in many places, such as my beloved Indianapolis, the county jail is the leading provider of mental health treatment.

Jail is not conducive to therapy. For example, in Montana's Flathead County, individuals with severe mental illness are placed in the "soft cell". This barren, padded cell has a grate in the floor for a toilet, and meals are served through a slot in the door. That's not going to help the person feel better. A look at the jail's case history confirms this.

But treatment costs money, and this is the era of no new taxes. Studies show that while most people want there to be a good mental health system, support diminishes once they realize it will mean higher taxes or higher insurance premiums. The treatment of and sometimes the very life of a psychiatric patient therefore goes to the lowest bidder.

Mental illness is not a problem that will go away, regardless of how much we want to sweep it under the rug. It will continue to plague our society. The question is "Will we be a just and humane society which takes care of our most vulnerable, or will we continue to use jails as psychiatric wards?"

People with PD's are committing crimes and causing mass disruption in this country. They need to be locked up somewhere. They aren't curable and their behavior is excused as mental illness when it is criminal behavior with a new name.

No, they need treatment Frank. And are they curable? That depends on how much effort society is willing to put into the treatment available to people living well below the poverty level. I think they are the ones we are mostly talking about here, & I have personally been mocked in court by a judge who saw I had a mental condition. For starters, I got a public defender with no interest in me, I then went to court every single month for 15 months, getting repeated continuances, which was quite difficult for me preparing each month, never knowing what would happen. Eventually someone realized a DA had never been assigned to my case. So 15 months of mental vanquish for me, due to a clerical error in their part. Suddenly they assigned a DA And then proceeded to hear my case. And while I had been put in charge of acquiring letters from my doctor and therapist, on the day of court, the PD had lost them. I think most people would have been granted a mistrial, or a postponement till my lawyer could find said papers. Particularly after wasting entire days of my time every month for almost a year and a half. But instead I was railroaded, with them knowing I had mental issues which the missing papers addressed adding that since then I had made some very significant strides forward, with a request for a bit of leniency due to my condition, but since the public defender lost them, things proceeded without taking any of that into account due to lack of said papers. No running back to his office and look for the papers, the judge wouldn't allow it (The judge only said no after I personally asked the judge of that was possible, and reconvene later, or the next day. My PD didn't care to ask any of that himself, who got visibly mad at me for not just staying silent, as I'd been told.) The judge laughed at me, asked if my mental illness made me a qualified lawyer, I muttered no, so then he asked me my opinion on a case of never heard of, acted amazed that " a high ranking lawyer such as myself " would know the case well. He mocked me a bit more until growing votes with his game, and decide to make a point out of me, and I was told I'd be made to pay court costs, and probation fees, as well as pay for my random drug screenings. As well as public service and again, me paying the cost associated with paying someone to supervise my public service..??? Even tho drugs played no role in what I was charged with, I still had to pay $75 cash whenever I was randomly screened. It added up to thousands of dollars quickly, and already, I've barely managed to live a month on less than what an average worker brings home in 2 weeks, at minimum wage for a decade or so. And the decision was to fine me financially, quite heavily? I wish in retrospect that is asked to just get a jail sentence. Living like that for long is going to bring out some bad ideas from anyone put in that position, trying to pay my monthly bills alone and eat with some regularity is all I can typically manage due to my condition. Frank, can't you see where treatment would have been a better solution? The fact I'd sought treatment a year or more before being told I had to should have shown I was remorseful and already working on controlling certain behaviors. Does it really sound like I got anything close to a fair, even reasonable, court case? Frank? *SMH*

Thank you for writing about this issue.
My dear friend is constantly being sent to court and prison, for her behavior due to bpd and substance use.
The comnunity simply wring their hands. Her family and friends distance themselves.
I love my friend, and, thus, desperately look for a way to ease her pain. As i suffer a mood disorder and severe anxiety, this is sometimes more difficult than it ought to be.
Thanks again, for starting the conversation. Let's keep talking, and build hope for our loved ones to find a way out of the cobwebs.

[…] has been shown, repeatedly, that prisons are not healthy environments for people with mental illness, but, unfortunately, our jails and prisons are often the largest treatment providers in the area. […]

[…] out a rather lengthy survey detailing why we should vote for him while McCain did not. We are not criminals who have lost the right to vote–we are citizens receiving treatment. The fact that we are mental health consumers should not […]

Hello there! This post could not be written any better! Reading this post reminds me of my good old room mate! He always kept talking about this. I will forward this page to him. Fairly certain he will have a good read. Thank you for sharing! edgdccgkkgfe

I totally agree! I am living it! My youngest daughter has BPD and has been in & out of jail many times - not because she is a criminal but because of her inappropriate behavior and lack of impulse control - not to mention being homeless. I am not an activist type of person, but I keep trying to find the answer of How To Solve this on-going problem in our society.
This is another excellent article, but leaves us dangling at the end - still wondering what do we do about it? Does anyone have an answer? And, not just a general answer, like - change the laws. HOW?/WHAT do we do?

I wish I knew the answer. Other than raising awareness, I don't know what to do. As I'm fond of saying, "This needs to be solved by minds wiser than mine." At one point in time I would've recommended lobbying one's Congressman or state representative, but I'm rapidly losing faith in American democracy by the stunts currently going on in D.C. I'd recommend trying to raise awareness through the media--nothing brings change like bad publicity. But I really don't know how to change things. How do you make people willing to pay higher taxes or premiums in order for there to be an adequate safety net available?
Maybe the best way to change the reality is to change hearts, one at a time, by being open about what really happens.

I empathise with you, and send you my best intentions.
I have a dear friend , who is currently in prison. She suffers constantly with her illness, with substance abuse, and with a seeming lack of understanding for her needs in Scotland, where she lives.
I love my girl friend dearly. When she has difficulty with her enotions or rage, i try to understand her experience, & model how I might handle the same.
I have difficulties of my own. I'm an extra sensitive person, much given to anxiety and mood swings. But I live in hope that love and understanding are the keys to walking this path beside her. &, hopefully, easing the way for others to grow & learn with us.
I'll keep you and your daughter in my thoughts. Every little resource that brings hope is a step forward, in my experience.