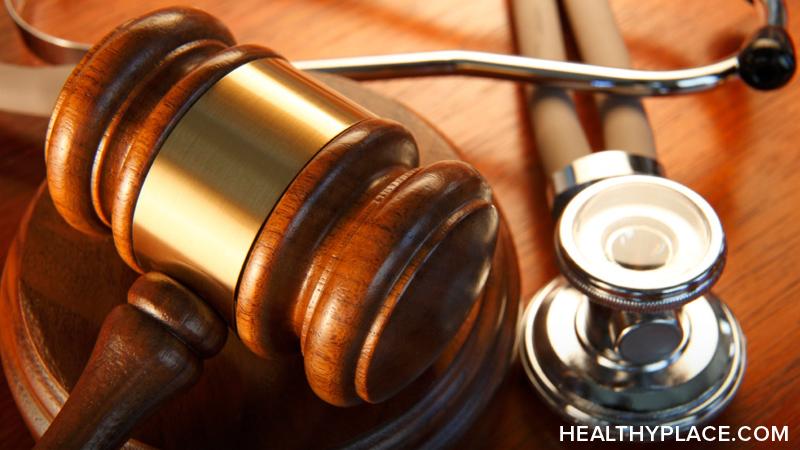 Mental illness can affect criminal behavior, but it's important to dissociate people with mental illness from violent acts and criminality in general. People often assume that a person must be mentally ill to commit an especially heinous crime. This stigma has been discussed at length, including how people with mental health issues are more likely to be victims of violent crime, but I want to approach the conversation about mental illness and criminal behavior differently.

The reality is, sometimes the people committing crimes do have mental illnesses that play a part in their criminal behavior. However, omitting explanations about why or how mental illness can contribute to criminality feeds to blanket statement stigma that labels all criminals as “crazy” and prevents people with mental illness who engage in criminal behavior from getting the mental health treatment they need.

How Should We Mention Mental Illness in Reports of Criminal Behavior?

In my city, a man was arrested after a house fire when the fire department discovered he had been building homemade bombs (which, thankfully, didn’t go off). His trial revealed he had severe, untreated mental health issues (although it wasn't specified which in the news) for which he had unsuccessfully been seeking treatment for 10 years. The judge in the case called it a “sad fact” that the man was only able to receive treatment as a result of something like this. The man is serving a conditional sentence, including receiving the treatment he needs.1

Many in the community responded by saying mental illness shouldn’t be an excuse and the guy needed a harsher punishment. To me, this narrative exists because news media don’t often take time (or have space) to explain the complexities of mental illness, including irrational behavior (The Role of the Media in Mental Health Stigma).

It also leaves too much room for people to make assumptions that all people with mental illness will behave erratically, potentially even dangerously. People begin to conflate the two ideas, which contributes to the stigma of the mentally ill as violent criminals.

Explain How Mental Illness Contributed to Criminal Behavior--If It Did

I know with the shrinking size of newspapers and the even more rapidly shrinking size of attention spans it can be hard to fit all those details in and get people to read them fully. However, I still see value in explaining these issues.

When we write in broad strokes such as this person has a mental health issue which caused him to do this, people don’t understand what that means. They see it as an excuse without understanding how mental illness can affect rational thought and think these people are just “crazy” and need to be locked away before they hurt someone or do more damage. This sometimes leads to the belief that all people with mental illness are dangerous.

Presenting stories this way also typically omits how proper mental health treatment, as opposed to jail time, helps people. My local would-be bomber reportedly expressed regret for his actions after getting help. If he had been thrown in jail and written off as a lost, crazy cause, I’d wager he’d be even worse off. Even the judge in the case said jails are not treatment centers.

If mental illness were explained even a little bit more when reporting, I think people would better understand mental illness and it's relation to criminal behavior.

Should People With Mental Illness Who Commit Crimes Be Punished?

People need to face consequences for their actions, but that may not always look how we expect it to. If treatment can be provided, that should be the first thing doled out. Beyond that, the person should still face some sort of punishment; I imagine punishment would be determined case-by-case. I don't think that jail time is an across-the-board answer.

I get it, it’s hard to see past how victims are affected, and I’m certainly not trying to devalue that reality. But I think it’s also important to recognize what may be going on when mental illness is really involved in crime because then we can separate the stigma from the reality and actually make a difference in a criminal’s life while avoiding stigmatizing mental illness as a whole.

Hello to all team,
i am just went through above info for the reason to find mental health illness effect on Criminal behavior. the info was good but not to the point that i was looking for.
my question is "how mental health can effect criminal behavior?"
if any thing specific on hand is available, would be glad to have them

Hi Hamidullah,
I'm not sure what you're looking for specifically, but I'm thinking perhaps you're looking for more scientific information? If so, that's not something I have right on hand, but I can look into it for you to see where you might find such resources on HealthyPlace or through our partners.
That being said, my point with the above blog was that mental illness does affect our thinking, sometimes to the extreme where irrational things seem like rational things to do. When untreated, mental illness can be detrimental to a person's functioning and sometimes people resort to things such as criminal behaviour.
I hope that clarifies it. Please let me know if you are looking for something more specific and I'll see what I can dig up for you.
Thanks for commenting.

I think this is an incredibly important read and I'm so glad to see it being addressed here. Unfortunately there is an undeniable presence of mental illness in criminal history but as you point out it shouldn't be seen as a blanket -- all criminal have mental illness, all those with mental illness are criminals -- this is of course, completely untrue. Having proper response to action, and possibly including treatment is a positive way to respond to these situations.