Psychiatric Medication Stigma: There's a Pill for That 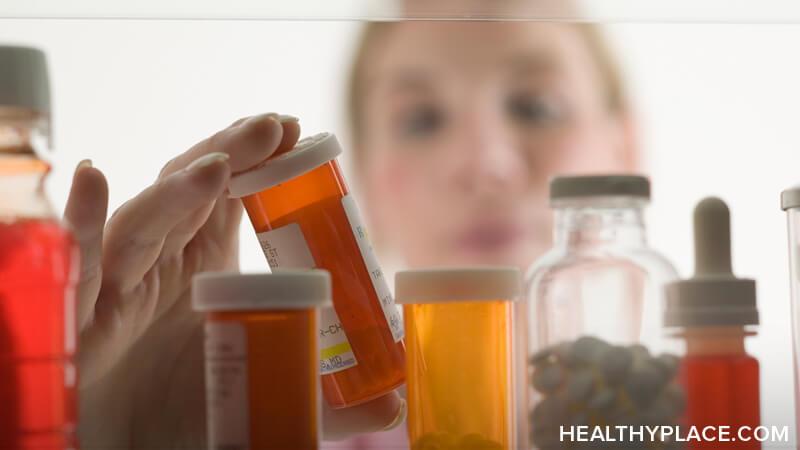 The use of psychiatric medication has grown significantly over the years. According to a survey done by the Centers for Disease Control and Prevention, between 2011-2014 over 10 percent of U.S. adults reported taking an antidepressant in the past 30 days (compared with 6.4 percent from 1999-2002).1 With a higher percentage of the population taking psychiatric medication, there is a chance that its use is being increasingly normalized.

However, this can lead to a different kind of psychiatric medication stigma. Because medication is becoming so prevalent, many people readily assume that fixing mental health problems is as easy as picking up a prescription from the drugstore.

I have heard this opinion expressed in various ways. Most recently, I was discussing a complex mental health issue with someone and received the reply, “There are pills for that.”

I was taken aback by the overly simplistic nature of this response. Certainly, there are many pills available to treat mental health conditions, but long-lasting recovery tends to involve far more than getting a prescription.

Sometimes Medication Does Not Reduce Symptoms

The prescription medication stigma that says taking a pill is an easy fix for all mental health problems implies that those whose symptoms do not improve with medication somehow do not want to get better. This perpetuates mental health stigma because it places blame on the person who is suffering. In reality, medication may prove ineffective for a variety of reasons.

Although many people with mental health conditions can benefit from taking medication, this hardly means that it is 100 percent effective. For example, only about one-third of people with major depressive disorder will experience symptom remission with the first antidepressant they try. Another third will not experience relief even after trying multiple medications.2 Additionally, even if a medication helps, it may only offer partial relief from symptoms.

For someone already experiencing hopelessness because of mental illness, having symptoms that are unresponsive to treatment can feel like a personal failure. This feeling is intensified if the expectation from friends and family is that going on medication will completely resolve the issue. That is why it is important to explore multiple treatment options rather than assuming medication will be effective all by itself.

Unfortunately, there is no "one size fits all" answer to mental health treatment. What works for one person will not guarantee success for another. As researchers continue to explore options for effective treatment, acknowledging the complexity of mental health conditions remains an essential part of combatting stigma.

ok- so your mad- got it- now swallow this- shut up- people aren't mentally ill- their troubled- unless your in the mental club,- all about which club --"you need" to belong to/with-- to me it is anyway-, some people just cant do mad- sorry but if its OK for you - that's great- some people need to see the crap to overcome it- that's how "those people" find their way- whereas--some people already know what the crap and misery is, and why its there- usually, and its so ironic- it was misery that did it to them- messed them up- looking on the dark side of things- stuck- trapped- in a bad thinking head state- until they're overwhelmed, take drugs to alleviate- end up temporarily psychosed on street drugs- no real mental illness- but purely temporary drug effect- on the road of their lives, like a bump on the road, a temporary road block- delay-not "some mental illness" woooo-lets all get on board story- my sicks this- whats yours type deal- here ya go mad person- eat this insanity- poisons- you go mad going on,, or coming off, - that Psychiatry agrees with, happens-- how insane is that- the 1400 to 2962 reported and known, insane side effects, in a psychotropic, so here we are- we've been tagged mad-we've been forced to eat 1400 to 2962 insane side effects, that come on big ime going onto it- that if we try to escape from, once were addicted- we go mad too- all from a lovely doctor- who knows your gonna be mad once he or she drugs you- when your saying you not- along with your family- but are never going to be able to escape from that- that most don't even know until they've been addicted, and try to escape the debilitation and madness in the poisons- for them--to them-which only takes six weeks- about the time, funny that, your gonna be in the bin, as long as you agree your mad- youl eat the poison- you need the poison- their right- and your wrong, cause your not gonna get out until you do- and yet the very doctors doing this- also admit at the same time- these drugs don't suit everyone- they harm "some people" they say- concede- yet none of them - ask them- have ever got anyone off them safely- and that's a catch 22 from hell- is what that is- glad everyone's happy and believing in and with their diagnosis and treatment- but are those people prepared to back up the people who cant do that- what they can- are those people, ever going to back up, the non believers- their brothers/sisters in arms- the people reporting those 1400 to 2962 aDVERSE SIDE EFFECTS- that "their saying they cant cope with" being on-- that they just cant take- live their lives being on- saddened by- even traumatised from/by- being on them-That's what id like to know- does being drugged and believing in someone, supposedly helping you- prevent you, from supporting the sad unhappy traumatised people who can't.- who are being abused because of that imposition- that drugging, by the same people- a bit like the church everyone's leaving in droves--because of how- they treated some people- in spite of their faith and their love of Christ or religion- That's what i don't get- I thought we were brothers in arms- and that no matter who it is calling the shots- they cant act a certain way with us- when at the same time, their abusing over half the people who don't believe them- what they're saying, and what their doing,-silly me hey, maybe that brothers and sisters in arms things been drugged out of them- stuffed if i know.

Medication can help a situation temporarily but does not cure mental illness! Thank you for your contribution to the debate! I appreciate it.