What is Secondary Traumatic Stress?

Secondary traumatic stress can be thought of as PTSD symptoms seen in those directly related to a sufferer of PTSD not emerging due to a lived trauma. In other words, PTSD is passed from veteran to spouse by way of their close relationship and through transmitted knowledge of the traumatic event. 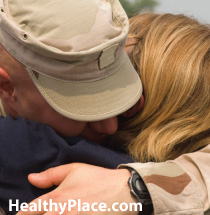 These types of problems would be expected in a veteran with combat PTSD but we now know these problems occur in his or her spouse as well.

This study found that between 21.6-42.6% of wives reported symptoms severe enough to quality as PTSD in the spouse.

(Almost all research centers around male veterans with female spouses; however, there is no reason to believe that male spouses would fair any differently.)

In addition to the manifestation of secondary traumatic stress, the caregiver (most often the spouse) also experiences a burden in caring for the person with the mental health issue. Caregiver burden is more pronounced in spouses of veterans with more severe combat PTSD. This caregiver burden is thought to possibility contribute to the secondary distress felt by spouses.

What Can Be Done about Secondary Traumatic Stress in Spouses?

Additionally, treatment of the veteran with combat PTSD is thought to improve the spouse’s distress levels as well. Once this happens, the spouses are able to be more effective caregivers which may help the veterans further. In other words, if one spouse experiences less distress, the other spouse may follow suit.

No matter what, though, ignoring the symptoms of secondary traumatic stress in spouses is not an option any more than ignoring combat PTSD in veterans is. Just as one partner improving helps the other, one partner worsening can bring the other partner down too. So what matters most is that secondary traumatic stress be properly evaluated and treated by a professional (such as a psychotherapist) so that it takes as little a toll on the family as possible.

Combat PTSD Symptoms – Hyperarousal (Being Keyed Up)
PTSD vs. Combat-Related PTSD
Anonymous
May, 29 2018 at 1:16 pm

My husband and I have been together for a little over 6 years now. For a long time things were great...then he started to change. He gets so drunk that he cannot remember what he does or says to me. He's started to get physical and I was told that if I called the cops on him again, that he would end his life long before they could arrive. He refuses help for his alcohol problem, and yells that he doesn't have a problem. Yet, the only time he is like this is when he drinks, which sadly is almost every day. Yet, on those rare days when he is too hungover to drink, he is the most loving man and the man I fell in love with. I've never been so scared in my life. And he put his hands on me. That's not okay. I've tried everything I can think of, in the moment to get him to stop. I've tried not saying a word, I've tried yelling, I've tried calmly talking and asking him to calm down. It's like a switch goes off, and he doesn't even know why he's so violently angry. Things in our home are constantly broken and thrown, holes in the walls...I'm just so lost, and starting to realize that my personality and outlook on life are changing drastically and there needs to be help for veteran's spouses....it's not just the veterans who've seen war, who deal with the consequences...

God help all of the veterans please don't forget the families

Contact your local VA hospital
They have resources for you to tap. Just know if you tell them he has been violent they WILL baker act him and force him to undergo mental health exams. (I've been through these from PTSD) it's not all bad, but it's hard to fix someone who doesn't want help. But they may have some good advice l, or a counselor you can talk to. God Bless.

I have 2ndary PTSD. I've had it for 20 years. I'm 62 and he 68. He older he gets the worst he gets. In the last 10 years hes gotton more aggesive, abusive , metalally, and pyshically abusive. I don't understand him anymore. I left for two years I thought we had our problems iron out. Wrong biggest mistake I ever made. It lasted l week before he blew up. And I'm stuck again. I spent all the money I had to spent up house. He's says things and forgets he says it. I don't no what to do , I'm scared, I locked my door when he's mad or at night. I'm lost PTSD is like he's cheating with someone invisible and you can't find them .

I'm the widow of a Vietnam veteran who had severe PTSD. We were together for over 40 yrs married for 40. We have 3 adult sons. He's been gone for almost 6 yrs now died from cirossis & liver disease/cancer from contracting Hep C in Vietnam. I won't attempt to tell my story I would have to write a book. I know I have been affected by living basically my entire adult life with someone who had PTSD and have been looking for some kind of specialized help in my area.