Anxiety Disorders: Can You Fake It 'til You Make It?

When I was in graduate school preparing to be a counselor, a professor once told our class that, rather than worrying about practicing with clients, we should simply fake it 'til we make it (Faking Confidence When Not Confident Can Build Self-Esteem). The class as a whole was experiencing significant anxiety, and it seemed unlikely that we could just fake our way out of anxiety and into success. Why would she even suggest something this shallow?

Why Fake It 'Til You Make It Can Help Anxiety Disorders

As it so happens, "fake it 'til you make it" can help anxiety disorders. The concept comes from the therapy technique called acting as if. Developed by psychotherapist Alfred Adler, acting as if encourages people to act as if their obstacles, including anxiety disorders, are already gone.

The idea is that actions are important, and when people begin to act differently, they begin to think and feel differently, and they become different. "Fake it 'til you make it," then, is a way to allow ourselves to take action despite paralyzing anxiety disorders. 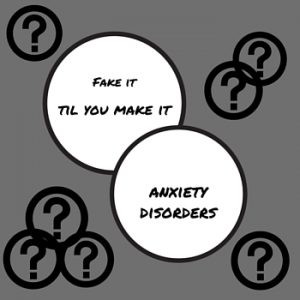 As anyone living with anxiety disorders knows, anxiety snakes its way throughout the brain, twists itself around our thoughts, and injects them with its poisonous venom. Anxiety makes us overthink everything, and with anxiety, our thoughts center on fears, worries, and the magnification of our own shortcomings.

"Fake it 'til you make it" asks people to ignore those anxious thoughts and act as if they don't exist. After all, with anxiety disorders, our thoughts aren't trustworthy anyway, so why not just ignore them?

Should You Fake it til You Make it with Anxiety Disorders?

There's validity to both sides of the argument. "Fake it 'til you make it" can help you begin to take action. When you take even little steps, you start to have success. When you have success, your thoughts and feelings shift positively (5 Character Strengths of People Living With Anxiety). When actions, thoughts, and feelings all begin to improve, anxiety disorders diminish. Yet "fake it 'til you make it" can be incredibly difficult when you live with one or more anxiety disorders.

Consider experimenting slowly. What one thing would you most like to change? What little steps would get you there? Pick one step, one that you feel comfortable with, and no matter how tiny, take action. Fake it 'til you make it in this one area, and you'll be just a bit closer to banishing anxiety disorders from your life.

Tags: Fake it 'til you make it. anxiety disorders

APA Reference
Peterson, T. (2016, April 7). Anxiety Disorders: Can You Fake It 'til You Make It?, HealthyPlace. Retrieved on 2023, January 31 from https://www.healthyplace.com/blogs/anxiety-schmanxiety/2016/04/anxiety-disorders-can-you-fake-it-til-you-make-it

Do More of What Works To Reduce Anxiety
Reading Helps You Cope with Anxiety
John
April, 10 2016 at 10:41 pm

I can't fake it. When anxiety hits and depression follows, even my dog feels the negative vibes. My wife knows right away. You are right, the human needs to change their patterns of actions and thoughts to positive ones. Negativity must be dealt with swiftly or it will override your life.

Hi John,
You make a very good point. Sometimes, it's impossible to fake it because those that know us well see through it. That can be a great motivator. It's frustrating how quickly negatively can take over. Recognizing it and replacing it is important! And doing it again. And again. It has a tendency to continue to creep back in, but over time, it loses its control because we genuinely stop believing it and have changed our thoughts and our actions.

Having a hard time faking anything. Just trying to get out of the dark hole I am in.

Hi John,
That's okay. Truly, fake it 'til you make it, or acting as if, has its place and can be effective. And truly, it does have its limits. When you are in a dark hole, trying to fake it can actually backfire and make you feel worse. That doesn't mean there's nothing you can do. Discover little things you can do every day to climb a little bit (or even just prevent sinking deeper -- that's progress, too.)

CAN ANXIETY MAKE YOU THINK YOU ARE GOING CRAZY
Hi Kim,
Yes, most definitely. Anxiety can make you think you are going crazy. In fact, that's one of the hallmarks of anxiety. If you haven't already done so, visiting with your doctor is a good idea just to rule out any other health conditions and then to make a plan for dealing with this anxiety. Often, seeing a therapist is extremely helpful in getting rid of the feeling that you are going crazy. You're not going crazy! You're just listening to your mind and body and starting to do something about anxiety.

I know it anxiety and what got me to this point! I just can't seem to get over it...ugh. Do you have any suggestions?

Hi Kim,
Anxiety is hard to Just get over! But you can move forward even when your anxiety is still strong. The foundation involves defining what you want (why do you want your anxiety be gone/what your life will be like when it's gone), then plan small actions to get there. Practicing mindfulness is very helpful, too. When you find yourself having anxious thoughts and emotions, bring your attention to your life right here, right now rather than on your fears, worries, and general anxiety. This comes from an approach called acceptance and commitment therapy (ACT). Mindfulness is part of ACT, and it also stands on its own. This article will tell you a bit more if you're interested: https://www.healthyplace.com/blogs/anxiety-schmanxiety/2015/07/stop-avoiding-anxiety-acce…