Abuse Is a Scary Word No One Wants to Use: When Should You? 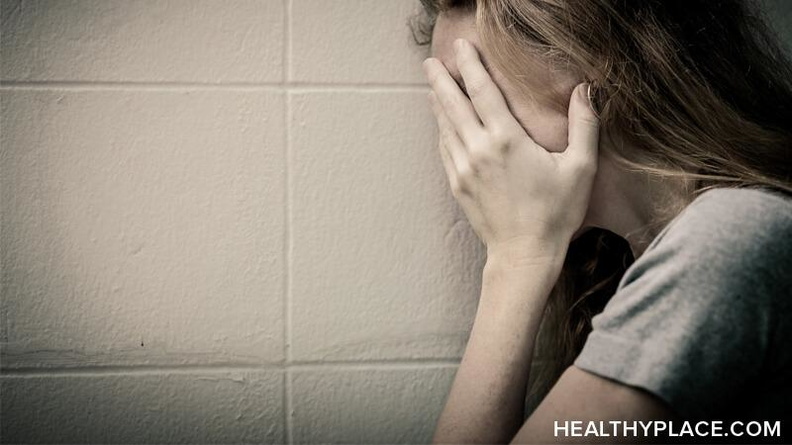 When I began my website way back in 2008, I chose the title "Verbal Abuse Journals" because, somehow, the word Verbal seemed to soften up the word Abuse. Back then, to me, "Verbal Abuse" was the name of a band or the type of angering insult one might hear from a stranger on the street. Verbal abuse was almost a joke, a simple case of mama-not-teaching-you-how-to-talk-nice, as far as I was concerned. I felt comfortable using the term verbal abuse to help describe my marriage because it wasn't really abuse. It couldn't be scary abuse--it was just an ugly vocabulary. And people can change their vocabulary. 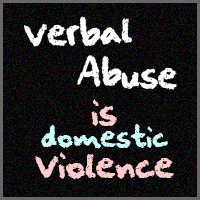 It didn't work. He would mimic me and say "Oh! That hurts! You're abusing me!" in a high-pitched voice with an exaggerated expression of surprise on his face. (Mimicking is also a form of verbal abuse.)

As the situation worsened, I'd hear him say to our boys during rough-housing, "Oh! Ouch! You're abusing me!" in the same girly voice. This, of course, was abusive too because he said without saying, "girls are wussies and your mama-who-is-causing-disruptions is a girl and you boys shouldn't think or act like mama mama or daddy will make fun of you too".

One time after calling him out for his verbal abuse, he charged over to me and sliced his hands through the air on either side of my face while bellowing, "You think that is abuse? Do you want to see what abuse is like? [now pounding his fist into his palm] You've got it so f*^king easy and you don't even appreciate it!" I took two steps back, shaking in my socks, and said, "Intimidating behavior is verbal abuse too!" (Let's not discuss how wise that was at the present time...)

Fortunately, instead of showing me how appreciative I should be, my husband turned around and left me to my quickly-beating heart and wobbly knees. I sat down and, after a few minutes, realized how close "intimidating anger" was to "physical abuse". Intimidating anger like my husband used is body language only. He didn't touch me. I said to myself, "He didn't touch me this time," and then cried because the times he had "touched" me flooded back to mind.

There were two memories that came back right away, but there would have been more if

Suddenly I realized that verbal abuse is freaking serious stuff. I thought of the fear I felt when his tone changed a certain way, the nervousness that came over me when I heard boots hit the floor in the kitchen, and the sheer panic I felt when seeing "that look" come over his face. Verbal abuse was straight out abuse. My husband abused me. I could not ignore the abuse in my relationship any longer.

All Abuse Is Scary Because It All Hurts--Emotionally and Physically

After that, I began to fill in the blanks between verbal abuse and physical. I suffered emotional abuse, mental abuse, and (a couple of times) sexual abuse. The common factor was fear - my fear of him. There was no easy fix for this mess. My husband could not simply teach himself a kinder, more polite vocabulary. His words were the outward expression of some very ingrained, terrible beliefs he carried within himself. As it turned out, they are ingrained beliefs he is not willing to question or change.

Abuse is a scary word. No one wants to use it to describe their marriage or relationship. It is far easier to admit that we have a "bad relationship" or that "our relationship has problems". I dare say that a "problematic" relationship does not include fear - not even a little bit of it.

Verbal abuse causes fear. It makes you want to fight, flee or freeze and become so small you can't be seen at all. When you can admit to yourself that your relationship is abusive even if there is "only verbal abuse" used so far, then you can move forward and act upon that knowledge. So long as you diminish your feelings of fear or the term verbal abuse as "nothing" you will not find your way to peace.

APA Reference
Jo, K. (2012, December 14). Abuse Is a Scary Word No One Wants to Use: When Should You?, HealthyPlace. Retrieved on 2022, September 29 from https://www.healthyplace.com/blogs/verbalabuseinrelationships/2012/12/abuse-is-a-scary-word-no-one-wants-to-use

Co-Parenting With An Abuser
PTSD and Memories of Abuse Can Diminish by Noticing Them
Ericka
February, 23 2016 at 4:35 am

You mention a book that you've worn out and written notes in the margins in this article. What is the name of that book?

Ericka, the book is called "The Verbally Abusive Man, Can He Change?" by Patricia Evans.

Hello. Thank you very much for sharing this article. I have been married now for 3 years to a man that is emotionally, verbally, and mentally abusive to me. It is hard to understand and doubly hard to leave this relationship. One day he can be the man that I fell in love with - can be kind and caring. Then the next day he is a monster. He curses me, he calls me names, he accuses me of horrible things, threatens me.....The sad part is later he says he does not know what I am talking about - that it never happened - that I must be crazy or that if it did happen it was probably my fault. I simply cannot take the abuse anymore. It is affecting me physically and mentally. I have lost all self esteem. I have lost all interest in anything. Why cant I make myself let go and move on.....

But how can you move on when life threatening illness was seemed to start it and you lost your job and doctors have warned you it may be safer to stay where you are because the move might kill you and they still think you might live without the stress...and of course they do not seem to get the irony of their own statements (I'm already stressed clearly...).but you're very tired very broke and all you seem to do is sleep or pray that death would hurry up and happen now anyways to save you the trouble and pain. Far better to be with god than here.

You can "move on" in your mind to a mental/emotional state where the abuse doesn't hurt so much. You can also have your partner put out of the house if you get a restraining order that sticks. Once your abuser is out of the house, you can hear God's voice much more clearly. Let God decide when it is time for you to go - don't make that decision for Him. Please call The National Suicide Prevention Hotline number at 1-800-273-8255. The National Domestic Violence Hotline number is 800-799-7233. You should call them, too. There is hope for you, but you have to get help from the right people.

Thank you for this, I needed the reminder.
For me, a big challenge has been to choose to be honest with myself about this issue in my relationships, if I believe someone is essentially *good* & acting out from their own fear & ignorance & trauma triggers, then I am loathe to label them as *bad*, which is what is set off for most ppl by the word *abuse*.
So even Liking or Sharing this post implies that I am *accusing* my very recently ex-partner of being abusive...
& overall, that feels *unfair*, but the truth is, on the increasingly more regular occasions when he did go into an altered state of inappropriate RAGE, his behaviour WAS abusive, & I was, very, scared of him in those moments, & its deeply painful to accept that reality.
That I believe he has Aspergers & so has disabled capacity to even understand my feelings, & that I live with Complex PTSD from exposure to early chilhood (verbal) abuse & intimidation, meant that the worst times were very bad indeed,for both of us.
The only times I was clearly able to recognise the threshold of * really not ok* were the few times I witnessed him being physically abusive to his extremely well-loved dog... & even then, he didn't *see* himself or remember his behaviour afterwards.
As you astutely say, if they are not willing to question or change, no amount of loyalty or love or even compassion will ever make it ok :-( But, my oh my, this is without doubt the saddest conclusion I have ever come to, cos on a *good day*, he was kinder to me than anyone else I've ever known, in the best ways he could :-) & it's harder to integrate these truths, cos the abuse was almost always in private, & the rages were only seen by me. To the rest of his world, he is a prince, & to some, a *long suffering* one, cos I became more & more fearful, & harsh with him, the more I felt the love he used to show me in his own way, had started, all too often, to look like hate :-(
Thanks for writing, & for listening, helps me shift another giant boulder from the doorway to my tender heart :-) xm

You know, despite what you think his emotional problems could be, the fact that his "bad side" was reserved for you and his dog shows that he CAN control how he behaves. If he is a "prince" to others and a horror to you, that is a clue that his issue is "control & manipulation", aka abuse, rather than some mental issue that deserves more compassion.
Plus, no matter why a person is abusive, there comes a point where their victims must ask themselves: can I tolerate this behavior any longer? When the answer is "no", it is time to move on.