When Verbal Abuse Is Disguised as a Joke 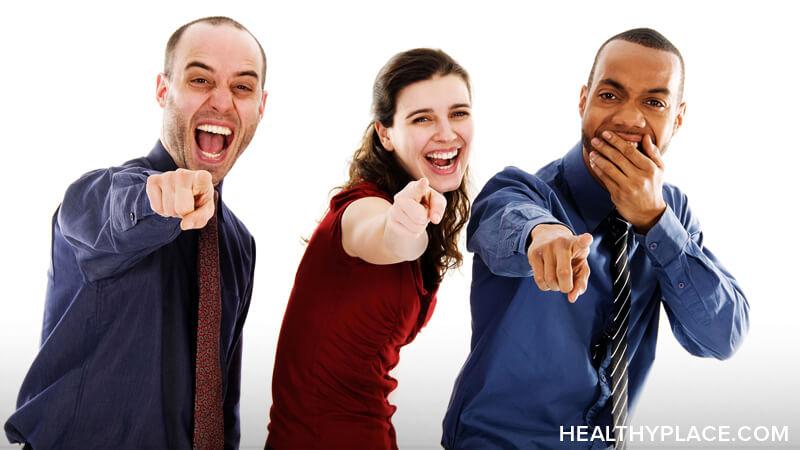 One of the reasons verbal abuse is so insidious is that the abuser goes to great lengths to disguise his behavior as normal by saying hurtful things to you with a laughing or joking tone. By making jibes about your appearance or calling you stupid "for a joke," he can convince you that the abuse is all in your head, while still managing to belittle you into submission. Over time, you'll start questioning your own judgment. You'll put your trust in him rather than trusting your intuition. As a result, things will always end up being done his way. However, if he were to act this way explicitly, he risks being called out on his behavior and having his dominance undermined -- the very thing an abuser fears the most.

That Verbal Abuse Wasn't a Joke, and You're Not Too Sensitive

Disguising a hurtful comment as a joke is one of the many signs of verbal abuse, but I didn't know this at the time. Like many others, I believed I was just too sensitive; that if I wasn't so insecure I could handle his "banter" and we would get along just fine.

It's important to remember that a verbally abusive partner behaves this way so he can assert his control and influence over you. If you realized how great you were and how much better you deserved, you might not be willing to put up with his "jokes."

Identifying a pattern of abuse is half the battle, but it's up to you to break the cycle.

APA Reference
Smith, E. (2017, July 18). When Verbal Abuse Is Disguised as a Joke, HealthyPlace. Retrieved on 2020, April 3 from https://www.healthyplace.com/blogs/verbalabuseinrelationships/2017/07/when-verbal-abuse-is-disguised-as-a-joke

The Difference Between Arguments and Verbal Abuse
Why Does Verbal Abuse Happen? What Makes a Person Abusive?
Catie
January, 30 2019 at 1:00 pm

Hi, my boyfriend and I have a lot of what you would call “banter” and he is very funny, loud and outgoing, as am I, so we share this sense of humour. I have spoken to him countless times over the past couple of years about some jokes going too far and no longer being funny, and making it very clear by not laughing when I find his remarks hurtful and also by telling him. I am very careful not to just expect him to guess my feelings as some people do, as I want my message to not be mistaken, so I am very clear when his jokes are hurtful to me.
Looking back, he has undermined me by saying things such as “you’re not funny” and making jokes about my appearance eg “you’re so pale” or “you’re ginger” when I had dyed red hair, or something that I don’t think is incredibly offensive, it could be seen as “teasing”, but it was relentless.
I am so incredibly sick of explaining to him what I find hurtful and he still so often responds with blaming me for being inconsistent in my reaction, saying that sometimes I laugh and other days I’m upset, and that it is a joke. I believe that in the past I have perhaps been inconsistent in my reaction, and more recently I have been very explicit when he says anything insulting within a jokey context. We have had many big conversations about this issue, where I’m so frustrated I get very upset and cry. I enjoy most of all when we hang out in a group of friends which happens rarely, as he is good fun, displays he cares about me in front of my friends (I have been ill for a while, so he shows to be caring) and he is funny and banters in a way that is not too far.
I’m concerned that this is all for show, but on one hand I see this as being normal to behave as your “best self” around other people and be more relaxed one on one?
But he still does the stuff described above trlling me it’s a joke and whilst it has improved, it still hurts and I feel undermined, disappointed and disrespected.
I don’t know what else I can do to get through to this person?

What about when he says things he thinks are amusing or exciting to him, but they're not to me? Is that the same? My boyfriend thinks it's exciting and "fun" to think of others, male or female, hitting on me. I find it annoying most of the time. He will go on for days about the same thing even though I tell him to stop. He says, "I'm just having fun." I can't even go to dinner with a high school friend without some stupid sexual comment from my boyfriend. You'd think he was a teenager instead of the 56 year old he is.

What about jokes to kids saying you will gut them like a pig or cut their ears off, as a “joke” if they don’t do what they are told? Or banging your hands on the table as a “joke” and response to your kid who has the beat in his blood and can’t stop drumming?
My husband has done both this weekend. And when (Eye) confronted him, he blew it off as jokes. Especially the first one bc he said he was just recalling what was said in a movie. No doubt a violent movie at that. He did watch The Hateful Eight on Friday. Maybe that awfulness got into his head. Am i being over sensitive as a woman? He said the boys knew he was joking. But they’ve also been conditioned some too.

Hi M,
You're definitely not being over-sensitive. I would be horrified if anyone said those things to my child, so you're right to call him out on his behavior. Watching violent movies is no excuse -- he's not a child. It's isn't an issue of gender, either.
The conditioning you refer to is worrying. Is there anyone you can talk to about what's happening in your home? If you feel that you or your children are threatened in any way, you should contact the Child Abuse hotline or the Domestic Violence hotline, both of which can be found on our Helplines and Resources page.
Good luck, and please visit this page for information and support whenever you need it. Emma x

Agreed, nothing at all funny about it. It's all abuse no matter how you stack it all up. It's hurting someone, and making "that someone" dislike themselves only because of someone's need to feel better about their miserable self.

I totally agree, Nancy. Thank you for reading :)

Thanks again, I am frequent reader of this blog. And each time i get something worth to read. Thanks Emma.