Denial In Abusive Relationships Works - But Not After Them

Boy oh boy. Have I ever made some mistakes after leaving my abusive husband. I know that from a distance it looks like I've got my stuff together. I mean, I write this blog and give tips on how to heal from abuse and have a really good grip on the dynamics of abuse.

You would think I'd be off making new kinds of mistakes, having new kinds of adventures and leaving Egypt and it's river to tend to themselves. Ha! Double ha! Oh no - now I'm really laughing at myself . . . hold on a second while I remember what I was talking about . . .

Denial In The Abusive Relationship Screwed Up My Ability To Trust 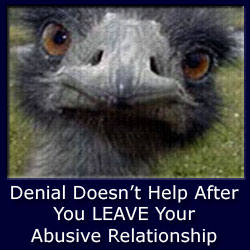 Denial screwed with my ability to trust from the beginning of the marriage. Since I married him, I should be able to trust him, so I did. Mistrust would have been a better reaction, but denial is strong.

So, my new self made its first big mistake. I tried to be who I was before I married Will. Despite the undercurrent of pain and mourning, I felt beautifully free sometimes. The last time I felt that way was when I was 16 with keys to a car and friends to hang out with in places none of us were supposed to go. Back then, I trusted everyone and out of all the people I'd met, only one really hurt me. I figured those were pretty good odds.

My new self decided to trust everyone. Do you know what happens when you open yourself up naively like that? You get a big purple light that emits from the top of your head and only jerks can see it. Jerks flocked to me like moths to a light bulb. (To the two people who may think I'm talking about you, I'm not.)

However, I did not want to be the former abuse victim with trust issues (so typical - my new self would defy the odds!). I denied the fact that I could not trust just anyone - for a while. I woke up when I found myself in a bathroom with a "tattoo artist" who suddenly wanted to show me the happy face tattooed on his penis. Don't ask.

I struggled for a few months to find that happy medium between trusting everyone and protecting myself (Trusting Yourself After an Abusive Relationship). It was difficult to stop denying that perhaps anyone in my position might have earned a few trust issues to work through.

Denial In My Abusive Relationship Screwed Up My Financial Sense

My second mistake was financial on the surface. For 18 years, no matter how badly Will treated me, he did provide for our family financially. We always had enough. But if we found ourselves in dire straits, a deployment or extra job would come through and save us. Financially, I was spoiled. So I gave myself a shopping habit to make me feel better about everything else.

I knew how to budget and handle money because that was my job during my marriage. After leaving, I knew my income was drastically reduced; I knew I needed a job. But my experience had been that just as it got really bad, money would magically arrive and save me. Guess what? Will was the money-maker. There were no more financial miracles headed my way.

I had me. I had a minimum wage job that never quite made it to full-time status. And I had attorney bills. And then I had medical bills. And I always had other bills I couldn't pay. Despite my previous financial astuteness, it turns out that you have to have money to save it, invest it, give it, and buy Neutrogena Body Oil. It really hurt when I couldn't afford my body oil anymore. (Anymore meaning after I'd maxed my credit cards.)

Although at face value this seems like a money problem, it was really a continuance of my denial problem. It was easier to deny the abuse and go shopping than to look at the truth. After leaving, it was easier to believe money would fall from heaven than to deal with my lack of it.

This part is really tough for me to write because I dearly love the two people involved in this story. One is my son and the other is my ex-boyfriend. Both of them had major drug problems that I did not think I was denying at the time. In hindsight, I denied the problems were as large as they were.

My son and I went round and round. Eventually, just before his 18th birthday, I convinced him to go to rehab. He went, but it was only so his girlfriend could continue living with us. His girlfriend, in the meantime, did not stop using. When Marc came home, the problem doubled. I forced his girlfriend to live elsewhere, thinking that would show my son how serious I was about his drug abuse.

He had a lesson for me in mind instead. Without going into details, his choices to increase his involvement in the drug world pulled my triggers. Instead of kicking him out, I made excuses for him. I innately knew I was denying the problem, but I couldn't find a way to fix it. In the end, due to my son's choices and the fact that I had no money, I ran away to Texas with my now ex-boyfriend, the second person this story is about.

You know what? I don't even want to talk about my ex-boyfriend today. I don't know what is going on with him completely because I've moved to Indiana with family to try to get a grip on my finances. I know I miss him. I know I love him. But it is much easier to talk about Marc because he is now drug-free!

It took a lot for Marc to get there. He had to do it on his own under some particularly taxing and strange circumstances. But he did it! For all of my excuses and denial, my son finally did what I dreamed he would do.

Sometimes, letting go is the answer. I'm still learning to let go of my major coping mechanism of denial. I'm not quite sure who I am if I can't bury my head in the sand.

What was your biggest mistake after leaving abuse? See also: Is Leaving an Abusive Relationship the Answer to Mental Health Problems?

APA Reference
Jo, K. (2013, November 17). Denial In Abusive Relationships Works - But Not After Them, HealthyPlace. Retrieved on 2022, October 7 from https://www.healthyplace.com/blogs/verbalabuseinrelationships/2013/11/denial-after-leaving-abuse

How to End the Habit of Isolation in Domestic Abuse Recovery
How To Find Some Peace In An Abusive Relationship
Liza
October, 12 2014 at 12:37 pm

I have read some of ur posts before but after reading above ur life before sounds similar to mine. I feel a sense of relief as it did happen. Need to stop self doubting that's the hard part especially now my husband is especially nice to me. I left him 18 months ago.

I too trusted the first people I could, my upstairs neighbors. The mother ended up stealing my oxycodone for my fibromyalgia and stole my phone when I was in the hospital for 2 weeks and racked up a bill of over $500!! Her boyfriend climbed into my bedroom window multiple times stealing things when I didn't even think I had anything to steal! The daughter and her friend stole other things from me like cd's, board games, alarm clock, $40 gift card I got from the abuse shelter where I had been before I moved to this place. She stole my camera and jewelry including my sentamental charm bracelet that survived the tornado I was in in 81' when an aunt suddenly started digging in the dirt and discovered it. I had gotten that charm from my parents when I was very young and was the last of my things that had sentimental belongs as my beautiful ceramic heart necklace with my name on it was lost in the tornado. Neighbors downstairs told police that they had seen the man coming out from my apartment with my food. I was too depressed and not really eating at the time so I didn't even notice it but I did notice when my Christmas candy was gone from the refigerator. I had been Soooo abused during my 20 year marriage and I did not need this abuse to happen to me again. I did end up filing a report but missing alot of stuff that had been stolen due to being so deeply depressed but when he had his final court date the guy skipped town. This guy had bragged to me earlier before I knew he had stolen from me and he said that he had a twin brother who had died and he showed me his drivers license. Also this guy did not have a drivers license and drove anyway with 1 or 2 times me calling the police when I saw him leaving with the car again. I am proud of myself too when I heard what I thought was abuse upstairs with the daughter so I ran upstairs & the daughter answered and she said everything was fine but I made her get her dad to see and I told him "I don't want to ever hear any abuse up here cuz I WILL call the police." Well, and wouldn't you know it I had to listen to many fights up there and one time I heard glass break so I called the police. The next day while my parents were here she knocked on the door & asked me why I called the police and was sticking for him. HUH! She smelled of alchohol and my parents witnessed it! This man got mad (at his actually a boyfriend not married) and put a huge crack into the gf's front car windshield. I was a nervous wreck already from an abusive ex husband who almost killed me twice. I was a nervous wreck but they were kicked out when my lease was nearly up. When I told the landlord after they left that they had stole from me he said why didn't I tell him right away cuz he was trying to get them evicted all along. But I had been so abused in my marriage that I had no self esteem to do so or tell the police that my ex was still abusing me and not following the 2 year restraining order. You'd think I would not be able to trust a sole after that but that's not my nature but I am much wiser from my past experiences and like everyone told me, what goes around comes around. I figure kharma has gotten all. I do recall seeing the daughter in the newspaper for druken driving.