When it comes to the statistics about domestic abuse, it doesn't matter to me how many men to how many women experience domestic violence. Domestic violence is a power issue more than a gender issue. Intimate Partner Violence affects men and women, and I really do not care in what proportion.

Domestic violence will not end until

I do not see the day when no person seeks power over another. I believe the majority of people want and work for equitable relationships, but I also believe there will always be those who do not. I think the desire for power over another person is a temptation all of us battle with at times. Some of us win that battle, and some of us lose ourselves in it.

Victim or Survivor? The Choice is Yours 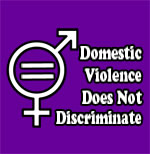 In the absence of our ability to make people stop abusing, we're left with the option of personal responsibility. It is up to each of us to decide that no one is allowed to hurt us emotionally, mentally or physically. If they do hurt us, it is up to us to end the abuse. No one else can do that for us. There are helping agencies designed to educate and support us, but ultimately, the decision to remain with an abusive person and find ways to deal with the abuse or to leave the relationship is our responsibility. Any abused male or female has the same choice - it is no different for either gender.

There is no doubt that our court system does not have the means to appropriately deal with non-physical abuse when it comes to the end of relationships and in regards to custody. In fact, the family court system often fails to protect the children when it comes to physically violent parents, awarding custody or allowing inappropriate visitations to the abuser. The family court system is a serious problem that cannot be avoided when victims of abuse with children choose to end the relationship. The court's decisions are often unfair to the victim and to the children.

How you choose to handle the consequences imposed by the court is your decision. You can decide that you are a victim and compound your problems, or you can decide that you will survive the court's decision with valor and commitment until the day comes when you have more evidence to refute it. Any male or female has the same choice - it is no different for either gender.

Whether you stay or leave an abusive relationship, you will also face the abuser's continued ability to say whatever they want to say about you. You may lose friends. You could lose your job. Your abuser could stalk and harass you. You could find yourself more isolated after the abuse than you were during it, especially as the agencies that aided your escape lose interest in you now that you're free. You can choose to feel victimized, or you choose to survive: find new friends, utilize other helping agencies to find work, do what you must to protect yourself from stalking, and reach out to end your isolation in healthy ways. Can you guess what I'm about to say? The choice is no different whether you're male or female.

Why I'm So Bent About Gender

Within anti-domestic violence advocacy, there seems to be a trend to pit female victims against male victims and vice-verse. I do not know who is behind it, nor do I know if there is a "who" to blame. I do know that blame has no place in this fight against domestic abuse, especially when victim blames victim for any reason.

I also cannot stand the new trending belief that both parents are better than one parent even with evidence that one of the parents abuse because it is a corruption of the Father's Rights movement. This is a complicated issue that I believe resulted from the pendulum swinging too quickly for societal acceptance in women's needed and just quest for equality. I have issues with including domestic violence in the Violence Against Women Act because its title perpetrates the myth that only males abuse and that females are weaker and need Big Brother's separate and unique protection.

In a perfect society, men and women are equally protected under the law not because more laws were made to protect one sex but because in each mind and heart of all people, women and men are respected equally, and their individual contributions or crimes are our only measures of judgment. However, this ideal is as far away from our current reality as the idea that no person would seek power over another.

Until everyone is considered equal and no one desires power over another, it is left to each of us, individually, to choose to be a victim or a survivor. Survivors fight against inequality and wrongful judgment (the essence of abuse) in whatever way they deem fit, proper and true. Victims stop trying. It does not matter how many injustices you endure or what gender you happen to be - the choice to be a victim or a survivor is yours and yours alone.

Using Your Emotion To Find Your Best Solutions Empowers You
Children in Abusive Homes Need Help to Unlearn Abuse
Fred
November, 1 2012 at 8:08 pm

I will concur that women can absolutely verbally abuse men. But I do find it troubling that the books etc about it talk about it as if men are the ones that do it. My wife does it me and her sisters do it to theirs husbands and her brothers do it to their wives. It works both ways. Thanks for pointing this out Kellie. And you're right. Whoever it happens to, it's wrong.
I still shake my head and wonder why in the heck a person would think it's OK to berate, insult, isolate, scold, and try to control their mate.

Nothing that a victim/survivor does actually "stops" the abuse. By leaving an abuser, a survivor gets away from the abuse, but the abuser will more likely than not continue to abuse others who stay in her/her/hir's way for too long.

You cannot stop the abuser, but you can stop the abuse. We cannot help what the abuser does when we end the abuse for ourselves. It is not our job to stop the abuser. It is not our responsibility to warn any new victims. It is our job to stay away (as much as possible if there are children involved).
You stop the abuse when you no longer allow it to harm you, either by leaving or putting up strong walls against every word your abuser says. To end physical violence, you must leave the relationship and (sometimes) protect yourself until your abuser moves on to a new victim. I don't know how to disallow a pinch or a punch in the face to harm you. Do I need to remind anyone that verbal/emotional abuse escalates to physical violence in the overwhelming majority of cases?