My Friend Abuses His Wife! Now She's Not Talking to Me

The last post offered insight into how to help your friend's wife who says she's being abused. This is the second email from a man who finds himself in that exact situation:

"The first time she and I talked, she asked that I not tell anyone and then said, "Do you think I am stupid?" That broke my heart. I replied, "You are a brilliant, kind person," and that put a smile on her face. I set out to help her build self-esteem.

"I email her every day with verbal abuse information. She doesn't send much of a reply back, so it is hard to know if she will take some type of action. Should I not email her anymore and hope that she gets help? Should I keep giving her advice and just hope that she does something about the abuse? To what degree do I detach myself?"

She is a grown-up, and it's up to her to rescue herself. She's not weak - if she were, she would have shriveled up and died from the abuse a long time ago. She's a very strong woman to be able to live in that environment. Let her come to you if she needs more help. 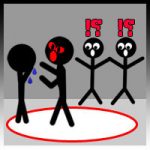 She can email you, she sees you sometimes, and she has access to a phone. If she's afraid to clutter the computer at home with abuse sites, she can go to the library or buy a program to erase her tracks.

Your consistent reminders to her about the abuse could backfire. The funny thing about abuse victims is they can say whatever they want about their abuser, but if you say something wrong about her husband, well, you're suddenly the enemy. Do you have a sister? If so, you know what I'm talking about. You can pick on her all day long, but let someone else say something and ...

So far as detaching, detach as much as possible. You've given her information on abuse. You've shown her that you care. Tell her that if she needs anything else, let you know, but you can't fix this for her.

You said her husband was a good friend, and now that you know what's going on, that is going to affect your friendship. You may need to distance yourself from him, too. You've got to keep your mind clear - abuse tangles it up and you can't tell light from dark after a while (even if you're not the intended victim!).

Trust me, if he gets wind that she's spoken to you, one of two things will happen:

He's collected information on you through the course of your friendship, and he knows where to hit below the belt to get the most bang for his effort. He'll tell you horrible things about her and make a convincing story of it. Or he'll tell people you're having an affair with his wife or some other lie that will hurt you personally or professionally. Whichever position benefits him the most.

Abusers are experts at interpreting people's actions and emotions. They learn it young because they cannot FEEL and must be able to pretend that they can feel in order to fit in. Honestly, he probably already knows something's cooking.

I say these things because I was abused too, and I understand your friend's wife to a large extent, but I can't read her mind. I can't tell you exactly what to do either - you've got to follow your gut on this one. But standing in between a woman who is still in love with her man and the abuser himself is NOT a good place to be.

In case you missed it, here's part 1 of My Friend Abuses His Wife! How Can I Help?

Tags: detachment how to help an abuse victim

APA Reference
Jo, K. (2012, August 9). My Friend Abuses His Wife! Now She's Not Talking to Me, HealthyPlace. Retrieved on 2022, May 17 from https://www.healthyplace.com/blogs/verbalabuseinrelationships/2012/08/friend-abusing-wife-2

Coming from an abusive relationship and being very lucky to have become friends with an older women who had been in a similar situation and gotten out. She understood what I needed and patiently over more than a year listened to me without judgement or threatening to act. Told me she knew I would leave when I was ready. She covered my black eyes and took me to lunch, the beach, something enjoyable and normal. She didn't dwell on my situation but she would listen. She never bad mouthed my abuser(that won't help) she made sure I knew I had a safe place for me or my son to be whenever for a night for an hour it didn't matter. What I am saying is tread lightly don't make that the constant topic of conversation. Remind the person being abused what a healthy relationship is by being a good friend or family member. Remind them you are confident in them and their decisions. This women helped me save my own life By providing me with a safe judgement free outlet and patiently reminding me of who I was before.keep in mind I wasn't easy on her at the time I trusted no one I lived in fear of my abuser and the fear of what would happen if people found out.
But she was right I left when I was ready. It's a year and half later it's not easy to pick up the pieces but I'm safe and there is a lot more joy in my heart than fear these days.

It's hard to sit in silence I've got a daughter in a abuse relationship with two Kids and it's going on five yrs I've had words with the abuser he has no respect s using her could care less only for himself I don't know Wh she tats he won't leave but she don't call or involve police ,she s damaging the children lives ,,,,but if I was you i would tell this friend off let everyone know what he is like ,,,,,,he may relly hurt this girl badly ,,,,,,or worse ,,,,the father of one of the kids will take ,t daughter to court I am going to be on his side ,,,children service don't do nothing to much to prove I can't ,,,,,the othe child is the abuser ,,,,he don't care bout nothing just for my daughter to take care if him ,,,,,,so please weak out to tis so called abuser you call friend ,,,,please

Check here to find out how you can best help your daughter: http://verbalabusejournals.com/how-stop-abuse/how-to-help-domestic-abuse-victim/

I'm stuck in a very bad situation right now. I have a friend who i've known for 21 years and he's abusing his girlfriend emotionally and mentally and the like. He calls her names, puts her down, degrades her, rips off money, screams at her, refuses to leave when she tells him, invades her facebook and texts, accuses her of doing things she's not and other things of similar nature.
I'm having a hard time taking any action because he's bullied me for years and will kick my ass and there's also an obligation of loyalty and the "guy's code" and i'll get in a lot of crap if i say anything and she wants me to be quiet too so he won't flip. Also, he abused another girl for years and i watched and suffered in silence and, as a result, it continued for many years and now she is damaged for life because i was scared into silence and didn't say anything. Not only that, but i even tried to go out with this other girl and was real dirty about it; not because i loved her but because i was trying to "save" her in my mind and my heart. I failed to stop this from happenining once and now i'm afraid it will happen again. I've sat here many nights now staring at my facebook contacts online because her brother is there and sometimes i wonder if i should say something but i don't know.

This was THE most informative, precisely written article I ever read that concerns itself with helping someone in an abusive situation.
Kudos to you for the great writing skill set, for the information and the time you took to share with everyone.