Reacting to Insinuations in the Verbally Abusive Relationship

During the few seconds it took me to connect the dots between his statement and what he really meant, he didn't say another word. He gave me the courtesy of remaining silent as my mind raced to find a way to avoid a fight that evening upon his return.

Once I figured out what he meant, I felt compelled to discuss it with him (defend myself). I said, "That isn't true. I am not irrational, my thinking is clear."

The second I opened my mouth, he became upset and very angry. He yelled at me and blamed me for wanting to start an argument as he was leaving for work. I didn't recall starting an argument; he was the one yelling.

In his deep thundering voice raged that this was just one more way in which I showed my lack of appreciation for what he did for our family - upsetting him on his way out the door was my sick way of manipulating him, wanting him to have a bad day, distracting him for nothing, seeking to make myself more important than his job... 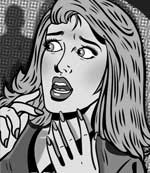 "You don't think, Kellie - for someone so smart you sure are stupid!" The door slammed, truck started, and he was gone.

He was physically gone, but he actually lingered in my mind for the rest of the day. I wished I would have or wouldn't have said this or done that. I replayed the scene time and again because it kept forcing its way into my consciousness, uninvited. The tears I didn't have time to let loose that morning flooded out of me at odd times during the day - doing dishes, dressing, waiting on my boys return from school...

I knew he was wrong. I knew something was wrong when his simple statement could arouse my mind to search for meaning, feeling and response all at once.

I decided on the same answer as always - I am crazy for allowing this to happen in my mind. It was my job to control my actions and thoughts. This was my fault.

As a victim of his abuse, I exhibited unhealthy responses to his loaded comment.

In the aftermath, I didn't take into consideration the idea that I was abused, the stress I was under or the anxiety I experienced. I didn't know about intrusive thoughts and the mental/emotional havoc they wreak, and I certainly didn't know how to control them. I wasn't aware of the dynamics of abuse, and I mistakenly believed I was in a normal relationship. I didn't know what I didn't know, and that was my greatest adversary.

If I Could Do It Again

Sometimes it helps me to revisit mornings like the one described and re-do it in a more healthy way. Imagining myself as powerful then as I am now enables me to answer the question "What if this happens to me again?" Instead of panicking and feeling helpless, I gain the security of knowing I would react differently.

I say: What do you mean?

Abuser says: (The abusive person may hedge and divert, not admitting to what they really MEAN because s/he's trying to get you to think poorly of yourself without them having to say a word.) Oh, you know, some people are so irrational that they shouldn't trust their thinking. They need a babysitter.

I say: Oh. I suppose there are some people in the world like that. I try not to spend time thinking of things I cannot control. It must be very frustrating to consider that fact this morning.

Abuser says: (We're going to skip the wordplay and go straight to the blow-up, the tension release, which is what the abuser is after anyway) Oh my GOD! You are so stupid you don't even realize I am talking about YOU! I don't know how I got into a relationship with someone so DENSE. Thanks for sending me off to work worrying about the safety of my children and my home while you're in charge here all day! (And continues the verbal abuse until slamming the door behind him, that action shaking the walls.)

I say to myself: Oh my God. That was freaking scary! He thinks I am irrational and a danger to our kids and home. He thinks I am stupid. This isn't the first time he's said these lies to me. I think he does not care about my feelings and wishes to harm me emotionally and mentally. And was that door slamming a sign of worse things to come? I do not want to be a party to his abuses any longer. I'm going to call the hotline, then my mom, and begin planning the safest way to get out of this relationship. (Knowing myself, I'd probably cry right now to relieve some of my fear and tension.)

And then I would forgive myself for falling into the abusive trap in the first place because I cannot control what another person thinks or does. All I can do is control which people I spend my time loving, and remember the person I protect the most should be myself.

To tell you the truth I'm tired too ..I had enough ...my husband does the same everyday wondering if hes mad orhappy I cant have a phone I cant toss at night withought him thinking I'm doing drugs. If I don't eat its because I'm doing drugs. If I cont sleep because I'm doing drugs I had a phone that wasn't connected and started insinuating I was talking to other man. I missedba call by 1 min. And he started insulting me I fang be in this no more he says I'm the crazy one that I am a sl ut. That he does a lot for the family and I don't do anything my love for him is not the same he wants to have kids and I'm scared that then hes going to say its not his at first I was afraid of being left but now if he wants to leave he can leave we moved far away from my family and now he wants to walk out on me km not scared anymore I'm tired of him always insinuating.....I cant even go out by myself withought him thinking I'm talking to someone else he wants to be possessive ...and me submisive

Kat, you are taking very courageous first steps to create a better future for your kids. It is scary, and there is a lot to grieve, but better days lie ahead. Hope you manage to find support - many have been there, done that, and if you find the right kinds of people, you'll get through the toughest of times and one day look back with a grin on your face.

All I can say is thank you! I am a young mother of five and have been married for over 10 years. I thought I was goign crazy. I went to my doctor a couple of weeks ago convinced that she was going to tell me I had a brain tumor or I was clinicaly insaine, instead, she diagnosed me with PTSD and opened my eyes to the abuse that I have been living with. I broke down in her office. I had tried to seek help years ago, but my pastor didn't believe me after talking to my husband and I together, which made my husband beyond angry that I had told someone, the only thing that saved me was that my pastor didn't believe me and my husband convinced him that it was hormones because I was pregnant at the time. It was sucha relief that my doctor recognized what I was going through. I have contacted a womens shelter and I move out in 8 days. I am so scared. I keep crying. I am thankful that you mention that you cried too, I'm comforted to know that it is normal and allowed. I found a safe place for my kids and I to go. I am so scared, but I keep envisioning playing with my kids in our new house. My children are all very young and close in age (he would get me pregnant to keep me trapped. I had horrible pregnancies because my health was so poor). I am scared that I will not be able to do it on my own with five small children (the youngest is just 5 month old). I am thankful to hear that you have overome this and that I will not always feel like this. Thank you, Thank you, Thank you!

Kellie your writing is brilliant! Thank you.
I've never read such an intricate analysis of the subtleties of verbal abuse by insinuation.
Joining the dots. That's what I did for years. Or rather, trying to join the dots but not managing to. I assumed he was a normal rational human being who really wanted to express himself clearly, but was somehow a bit lacking in communication skills so he didn't realise that his messages weren't always easy to interpret. I bent over backwards to try to soften the hard corners of his words.
So sad.
So long.
So glad I got out.

This is exactly what happens almost everyday with my son. Traps. I feel that I have to try and reason with him but it always turns into him having an episode. How do we live like this?

"Trap" is the right word. What we often fail to realize is that the abuser has his strategy planned out before he opens his mouth. We try to respond rationally and end up in the Twilight Zone." Identifying the crazymaking is pretty impressive. If you are still in this, I pray you get out. And soon.
Cindy

[...] Jo Holly over at Healthy Place just posted a great article on verbal abuse titled, Reacting to Insinuations in the Verbally Abusive Relationship. I laughed all the way through and her article is not one bit funny. Sometimes a big wad of truth [...]