A Verbal Abuser Defined Me: I’m No Longer His Opinion of Me 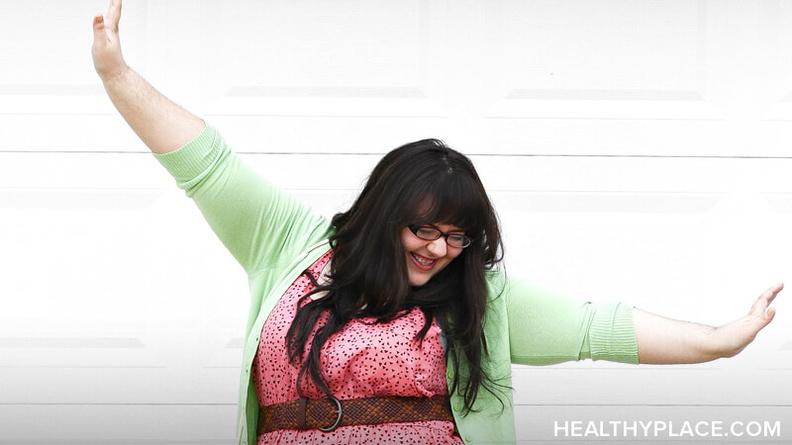 Who does he think you should you be? A female version of him. Or rather, the female version of who he thinks he would be if he were a woman. And that is what I deal with today because a verbal abuser and I had children together.

Yesterday I called my ex (the verbal abuser) about our children. We had a productive, almost pleasant conversation, right up until the end. It seems that anytime we're communicating in a way that I think normal people can do, he feels a need to remind me why I left.

A verbal abuser cannot allow you to be content with who you are.

Right at the end of our conversation, my ex launched into a monologue and said that my job is pointless. He said the teens I work with are going to end up dead or hooked on drugs in under a year, and the one I'm able to save from that fate is not worth the effort. He doesn't want his kids hanging around the trash I work with; he doesn't approve of them socializing with "those kinds of idiots." 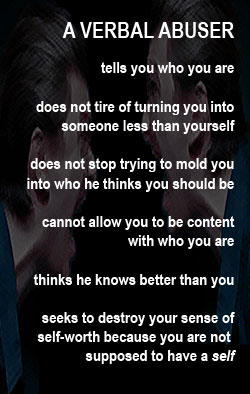 A verbal abuser thinks he knows better than you.

When those words so smoothly came from his mouth, I thought to myself, "A couple years ago, our oldest son was one step away from becoming a candidate for this program." In fact, almost a year before I left the marriage, I looked into this very program for my oldest son. He couldn't apply because he hadn't dropped out or been expelled from high school, but he was on that path.

My ex knows this. He was there for our son's drug abuse, running away, belligerence and lack of care about school and family.

So, I must assume that the statements he made about the teens I work with were not about the kids at all. The statements were about me. He was attempting to trivialize what I do for a living, hoping to diminish my sense of self-worth because he wants me to see no value in what I do. And because, in his words, he is what he does, he hoped I would believe I was worthless because what I do is worthless. In his opinion, only.

A verbal abuser seeks to destroy your sense of self-worth because you are not supposed to have a self. You are supposed to be his self.

All of that flashed through my mind in seconds. I replied, "Okay then, I'll talk to you soon," and hung up the phone.

I was able to see the abuse for what it was almost the instant he said it. I was able to release the nonsense. It did not affect me further than the disappointment I tend to feel when I realize he cannot function within our "relationship" without feeding his urge to put me down.

Once not too long ago, he asked me how I was doing at work and I replied, "I love my job!" Later, he told me that I was purposely trying to hurt his feelings when I answered that way. Translated, he said that it hurts him to see me happy.

He wanted me to suffer and go running back to him, I suppose. I did suffer; leaving the marriage was bitterly hard. But I didn't run back to him.

I Cannot Be Happily Me with a Verbal Abuser

This morning, I thought of those first weeks after leaving him. My moods were unstable. In the morning, I would call my sister and tell her how great I felt. I had so much positivity and energy that nothing could get me down.

After lunch, I'd call her crying and defeated. "Maybe I should go back, maybe I'm not strong enough, maybe..." and my sister would gently cut me off saying, "Kellie Jo, you know what it is like with him. Give this new life a chance."

I thought, in the beginning, that the abuse would stop once I was free of him. It hasn't stopped and I am not free completely. But it is much easier to deal with what he says. It is eternally disappointing to hear him say "I like who I am," and to know he will not change for his sons either.

But he is not my problem anymore. If he wants to live in a world of hate and misery, then he can. He is not me, and I don't have to appease him (anymore). I no longer believe that I am his opinion of me.

A verbal abuser hates that I think that way.

*Both women and men could be abusers or victims, so do not assume my pronoun choices are an implication that one gender abuses and the other is victimized.

APA Reference
Jo, K. (2011, March 17). A Verbal Abuser Defined Me: I’m No Longer His Opinion of Me, HealthyPlace. Retrieved on 2022, May 24 from https://www.healthyplace.com/blogs/verbalabuseinrelationships/2011/03/i-am-not-his-opinion-of-me

Battered Woman Syndrome
A Story of Leaving Domestic Abuse and How We Decide to Leave
Mary
October, 27 2019 at 9:58 pm

Going on 44 years with a verbal and emotional abuser. “No one knows you better than I do.” Every time he says that, I cringe because he doesn’t know the real me at all. He only knows the me he had invented in his sick mind and it’s not a pretty picture.
Why am I still here? He has all the money, he is a highly skilled trial attorney who will chop me up and now I am disabled to boot. He is more than I can handle to be truthful.

Going on 44 years with a verbal and emotional abuser. “No one knows you better than I do.” Every time he says that, I cringe because he doesn’t know the real me at all. He only knows the me he had invented in his sick mind and it’s not a pretty picture.
Why am I still here? He has all the money, he is a highly skilled trial attorney who will chop me up and now I am disabled to boot. He is more than I can handle to be truthful.

I also am trying to leave a verbal abuser. We have been together 17 years and we, like you, have sons. I really needed to read this tonight. Thank you so much for sharing your story. It was like reading my own life.

Thank you so much for your words. I really appreciate everything you have said.
Hugs&highfives

No one who truly loves you would ever tell you that it hurts them to see you happy. That comment alone says volumes. Of course it hurts not to be affirmed, sometimes it's hard not to let it get under your skin, but you are right -- you are not his opinion of you. You do so well and God gave you a special gift (as He gives all of us) to make a difference, in your own unique way.

If you can't feed a hundred people, then feed just one.
-- Mother Theresa
The one you are able to save IS worth the effort.
Let your ex wallow in his misery.